Edwards not concerned with rankings, just wants the belt

Nine days before he returns to the Octagon to face Peter Sobotta this Saturday in London, Leon Edwards was nervous. Not about his fight, but his brother Fabian’s fourth pro bout against Kent Kauppinen.

“I find it harder when he’s making the walk than when I’m making the walk,” he said last Thursday. “I’m cornering him tomorrow and I’m nervous already. But he’s a very good fighter and I’m looking forward to seeing him join me in the UFC one day.”

Big bro Leon didn’t have to worry. Fabian rose from an early knockdown to submit Kauppinen with eight seconds remaining in the first round, improving to 4-0 with four finishes.

Now it’s Leon’s turn. And while it’s the 26-year-old’s first bout as a member of the welterweight top 15, he’s not putting too much stock in that number.

“That top 15 means nothing to me,” he said. “My aim is to get that belt, so it is about time. But I’m just gonna focus on beating the guys they’re giving me. They gave me Peter Sobotta in London, I’m gonna go out there and put him away, and then I’m in the top ten from there.”
Don't Have FIGHT PASS Yet? | Start your 7-day Free Trial Now!

It’s been a long time coming for Birmingham’s “Rocky,” who has won six of his eight UFC bouts, a stretch that includes a current four-fight winning streak. If this week’s fight is your first exposure to Edwards, that’s not surprising, considering that he’s one of those throwback fighters who spends more time in the gym than on social media. Then when it’s time to fight, he shows up, puts in the work, gets his hand raised and then it’s back to the gym. In other words, he’s not chasing the spotlight.

“I can’t focus on another man and what hype they’re getting,” he said. “I just focus on what I’m doing. I focus on my training, I focus on winning. These guys are coming in and talking to get the limelight, and with me I’m gonna prove it with my fighting. My job is to go in there and beat these guys, and so far I’m doing it. I’ve got a great team around me, a great group of friends, and I’m just gonna keep doing what I’m doing. In a matter of time, they’ll come around. I’ve got people I’ve gotta hurt to get to where I want to get to, so I’ll just keep knocking everyone down and I’ll get to number one.” 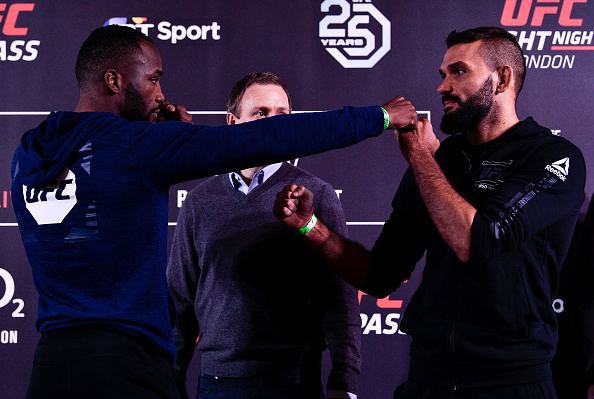 And though Edwards isn’t lighting up the internet with trash talk or callouts, with each victory, his confidence is growing, and after turning back Dominic Waters, Albert Tumenov, Vicente Luque and Bryan Barberena, he believes he is ready for anyone at 170 pounds. That doesn’t mean they’re all ready for him, but he’s happy to get that respect, not just from fans, but his peers.

“It feels good that my hard work is showing and paying off,” Edwards said. “They know I’m a tough fight for anyone. I feel the welterweight division is wide open right now and there’s not really a standout guy that I think can dominate the whole division. So from the top 15 to the champion, it’s wide open, and I’m confident in myself knowing I can beat anyone in the top 15. I’m starting this week, I’m gonna beat Peter Sobotta, then from there I’m calling out the top ten, and I’ll go from there.”

He laughs, but he’s determined to make 2018 his greatest year yet.

“This is going to be a big year for me,” he said. “I’m going undefeated and it’s going to be amazing, I can feel it. I don’t think there’s anyone in the division that can come out there and dominate me, so I’m looking forward to a big year this year.”