Welterweight Looks To Ride Winning Streak Into A Rematch With Usman
By Damon Martin • Mar. 12, 2019

Currently riding a six-fight win streak that dates back nearly three years, Leon Edwards is more motivated than ever before, but a lot of that also traces back to his last defeat.

Back in late 2015, Edwards fell by unanimous decision to Kamaru Usman just one fight after the future welterweight champion had won The Ultimate Fighter season 21.

As disappointing as that defeat was at the time, Edwards understands now looking back that he was still just a kid when he fought Usman so he never allowed that loss to fester and eat away at him.

Instead, Edwards looked at it as a learning lesson that helped put him on the path he’s on now as one of the best welterweight fighters in the sport.

“It’s two different fighters,” Edwards explains when comparing himself to the version who faced Usman in 2015. “When I fought Usman, I was a kid. I was a young man just coming into the UFC. Now I’m a veteran of the UFC and I’m battle tested. I’ve fought the who’s who.”

While he’s moved past that fight, Edwards admits that seeing Usman crowned champion with his win over Tyron Woodley at UFC 235 only served to spark an even bigger fire inside of him.

He knows he has competed against the best welterweight in the sport and nothing would feel better than avenging that defeat and living his dream of becoming champion at the same exact time.

“Me seeing him win that has given me even more motivation to push forward and see that it’s possible down the line,” Edwards said. “My plan is to compete three or four times this year and I’d like to get that Usman win back under my belt.

“Now to get a chance to fight him again and get my revenge, I look forward to it. It’s motivated me more than ever now. To get that belt and that win back in one fight, that’s the perfect goal for me.”

During his recent win streak, the 27-year old British standout has several high-profile performances under his belt, including a unanimous decision against Vicente Luque and a win in his first ever UFC main event against Donald “Cowboy” Cerrone.

This weekend at UFC Fight Night in London, Edwards faces noted submission specialist Gunnar Nelson in the co-main event, where he will attempt to build his win streak to seven in a row.

With each passing victory, Edwards’ confidence has only continued to grow stronger and he believes it’s going to take a lot for Nelson or anybody else to slow down his determination to fight for UFC gold.

“So me going out there on Saturday, defeating Gunnar Nelson, I’ll be on a seven-fight win streak then and I’ll be pushing for June-July then I’ll go again and hopefully get that Usman rematch by the end of the year or early next year.”

Nelson comes into the fight in London off a dominant win over Alex Oliveira last year, with a 3-1 record overall in his past four fights. 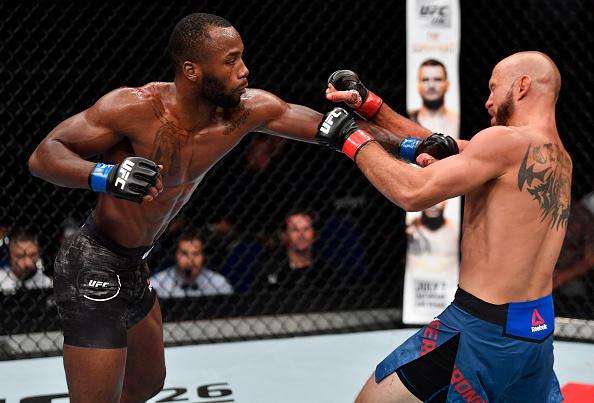 As much as Edwards anxiously awaits the opportunity to begin a faster ascension up the welterweight rankings, he believes Nelson actually poses a bigger threat than many of the fighters already cemented ahead of him in the rankings.

“He’s probably a harder fight than most of those guys in the top 10,” Edwards said. “He’s a tough opponent and I’m looking forward to the challenge.”

As much as Edwards is preparing for every kind of fight he could face on Saturday in London, he has a relatively good idea about what to expect from Nelson when they finally meet.

In many ways, Edwards looks at Nelson as a predictable opponent but he doesn’t mean that as an insult.

“I feel he’ll be going to his bread and butter, which is his grappling,” Edwards explained. “His striking has gotten a little bit better but if you see his shot selections, they’re pretty much the same as what he was throwing before. He is a tough opponent.

“Stylistically, he’s probably one of the harder opponents in the division because you know what he’s going to do.”

Catch Edwards vs Nelson Saturday In London, Exclusively On ESPN+

That means Edwards’ job is to stop Nelson from dragging him to the mat and applying that world class submission arsenal that has earned him most of his career victories.

“I’m comfortable wherever the fight goes. On the ground, on the feet, jiu-jitsu, wrestling, I’m looking forward to the challenge.”

Considering Edwards already knows what Nelson will likely do when they clash on Saturday, it’s only fair that he share the same information with his opponent.

In fact, Edwards has no qualms about telling Nelson his exact strategy before the ever step inside the Octagon together.

“My plan is to go out there and punch his head off,” Edwards said with a laugh. “That’s my plan.”

More than anything else, Edwards wants to make a statement to the rest of the welterweight division with his performance against Nelson and there’s only one way to do that.