Edward James Olmos on the Art of MMA 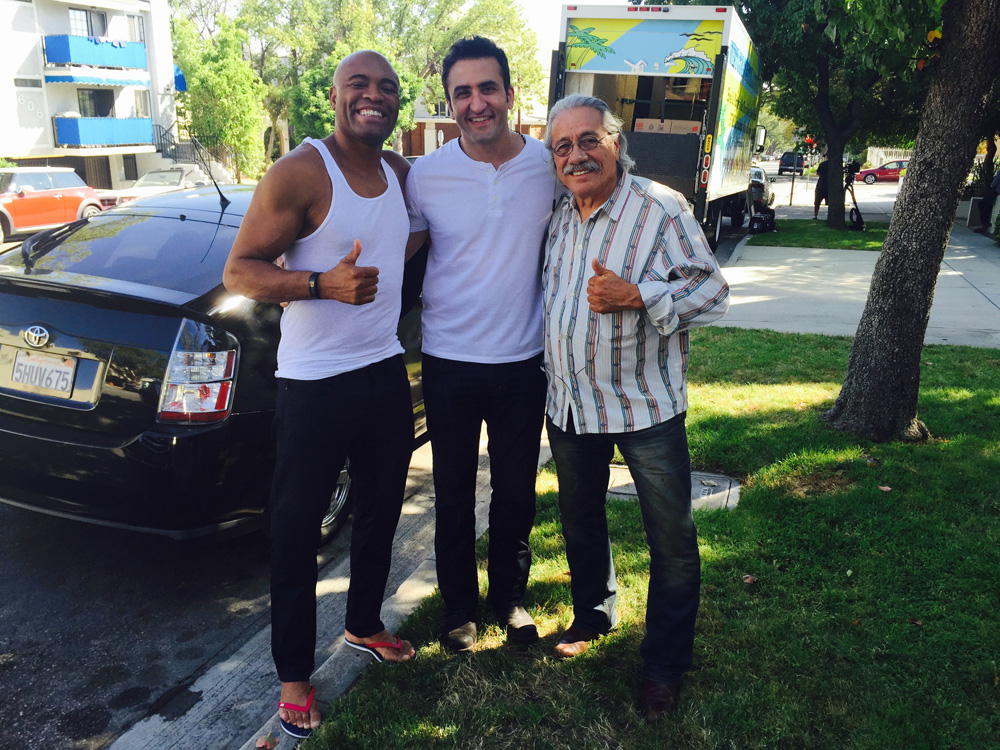 At this point in a life that has seen him play a seemingly endless array of iconic roles on film and television, get nominated for an Academy Award, and become a pioneer for Hispanic actors in Hollywood, Edward James Olmos can’t possibly get overwhelmed by too much, if anything.

“When I was watching Anderson Silva fight, I really started to see the beauty and the complexity of the sport, and I’ve been watching him fight for the last six years,” Olmos said of his exposure to mixed martial arts. “I learned the art of it. This is as unbelievably graceful and imaginative as any craft and any discipline I’ve ever seen. This is not just two guys going in there and trying to hurt each other. There is a finesse and an artistry that is overwhelming. Being a great triathlete is another example, where you have a multitude of different situations that you place yourself in – swimming, biking, then running – and you do it for long distances. Here, it’s the same thing; you have to know how to grapple, wrestle, and use other martial arts.”

Olmos’ involvement in the sport goes beyond just being a fan, though, as it was six years ago when he signed on with writer / director and actor Marty Sader for the film Monday Nights At Seven, expected to make its premiere at the Sundance Festival in January. Described as a love story, the film also includes a mixed martial arts element, hence the involvement of Silva, who plays Sader’s trainer, Mateus.

But the most intriguing part of the project is that the ending of MNA7 wasn’t filmed until last Friday night in Las Vegas. Normally, that’s not Earth shattering news, but consider that the ending was going to be Sader’s first amateur MMA fight. Not a staged fight, but an actual amateur bout on the RFA promotion’s event at the Downtown Las Vegas Events Center.

“Very risky,” Olmos, who plays Sader’s father in the film, agreed. “Nobody wanted him to do this, but this is his art, the way he does it. This is probably one of the most memorable situations in my art form ever. It’s just an amazing, amazing experience. I’ve been with Marty now for almost seven years, and he’s been working on this for nine. And it’s an amazing thing for it to come to this level. We’re all very grateful and all of us have just been amazed by the commitment on his part and everybody’s part. The knowledge of not knowing what’s going to happen is the most extraordinary experience I’ve ever been in in film, bar none. I’m just overwhelmed by it.”

The excitement in Olmos’ voice was evident as he got ready to sit down with Sader for an Italian meal after weigh-ins last Thursday, and after seeing his friend and colleague training for several years, primarily with judo legend Gokor Chivichyan, he was eager to see what the final chapter of this journey was going to reveal.

“You’re going to see a human being that has lived this in a manner that nobody else has ever done before,” he said. “There’s never been a real fight (in a film) where people actually did the real deal.”

And look at all the money they saved on fight choreography.

“We definitely didn’t have to go through weeks and weeks of structuring the fight,” Olmos laughs. “But this kid is just an amazing artist. He made it all come alive and knew exactly what was needed. He went to Gokor for his training camp and he’s gotten some of the greatest fighters in the world to train with him.”

All that was left was the fight, and I won’t spoil things for those wanting to see the film and be surprised, but suffice to say that like anything, it’s all about the journey. For Olmos, his exposure to mixed martial arts hasn’t just made him a fan for life; it’s revealed that when the Octagon door closes, it’s more than just a fight.

“The most extraordinary part is the imaginative sport that it is,” he said. “It’s much more than just boxing or wrestling. It’s much more. It’s a combination of arts being understood and used in a manner that allows one of the competitors to win. And you see it. Every time you watch a really good fight, you see extraordinary amounts of discipline and imagination. The way that they kick, the way that they throw punches or grapple, it’s like a dance. It’s classical movement at the highest level.”