The Education of Ross Pearson 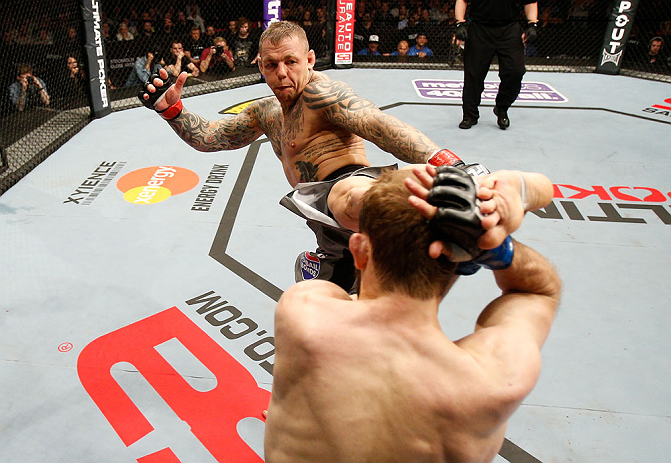 In professional sports, there is no blueprint for becoming successful – no guidebook to help you work your way to the top of the proverbial mountain. Everyone’s journey is different, and for many, it ends long before reaching the summit.

Some athletes enter their respective arena more prepared for the challenges that await them than others, poised to fulfill their potential and live up to the expectations laid at their feet when they first stepped onto the grand stage.

There are many others that come up short, missing the mark for any number of reasons. Whether they’re engulfed by the fame and glamour of life as a professional athlete, or the potential many envision never materializes, they become tales of what could have been, scattered across the landscape between the big leagues and the “still clinging to a dream” circuit.

For most, however, being an athlete is no different than any other job.

Day in and day out, you punch the clock. Impressing the boss is important, as is making a name for yourself in the industry. Even though you walk in the door for the first time thinking you have all the answers and there is nothing more for you to learn, you quickly realize that is far from true, and start on the task of learning new skills, picking up tips and tricks from the more seasoned individuals around you.

Over time, you find your place – carving out a place for yourself, and if you’re fortunate and so inclined, climb the corporate ladder.

Fighting is no different.

The UFC has seen its share of prodigies – including the one true “Prodigy,” BJ Penn – and it has seen its fair share of wasted potential too.

But in between immediate success and unmitigated disaster is where a large number of fighters find themselves – literally and figuratively – and that includes Ross Pearson.

Compact and strong like the bricks he used to work with as a mason in his native Sunderland, Pearson rose to prominence on season nine of The Ultimate Fighter, the long-running reality 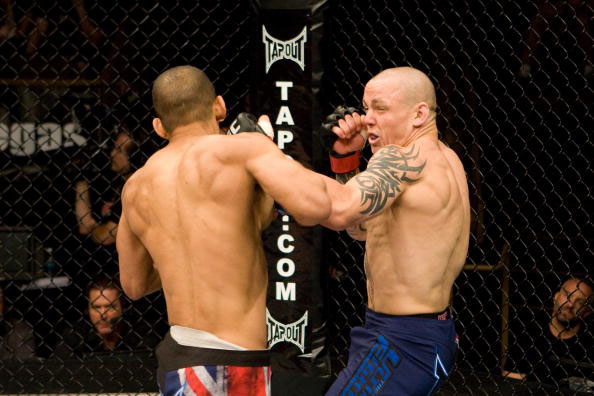 competition’s inaugural foray into the “country vs. country” format that has since spawned “The Smashes,” where Pearson came full circle as a coach of the British side, and the upcoming “TUF Nations.”

As part of Michael Bisping’s Team UK, the lightweight bulldog would work his way to the finals, where he defeated teammate Andre Winner to join the fraternity of Ultimate Fighter winners.

Two more victories followed, and Pearson seemed poised to make a run up the lightweight ladder. But then came two losses in his next three fights, a shift to the featherweight division, and a return to the 155-pound ranks after a knockout loss to Cub Swanson.

“I was 23 when I first went to The Ultimate Fighter,” begins Pearson, reflecting on a career that continues this weekend with a showdown opposite Melvin Guillard at the Phones 4u Arena in Manchester, England. “I was just really young, real immature, but I was super-hungry, and I was always super-keen.

“I wanted to knock everyone out in the first round. I wanted to submit everyone in the first round, and fighting at the highest level in the UFC, you’re not always going to be able to do that. It takes a lot of learning, takes a lot of preparation and experience. I’ve had 10 fights in the UFC now, and I really feel that I’m in a comfortable place – I understand what I’m doing, I’m prepared, and just enjoying it again.

Over the course of his UFC career, Pearson has stepped into the Octagon in five different countries, twice making the trek to compete in Australia, while adding Sweden and Brazil to his collection of passport stamps acquired over the years.

He’s also fought five times in the United States, and opted to relocate from his native England to San Diego, California in order to train with the all-star cast of coaches and fighters at Alliance MMA. There have been training trips to Thailand, and months spent back home, working with former coaches and long-time friends, including one such trip that was made prior to this contest.

“The whole thing that I’ve learned from this experience of traveling the world fighting is learning the fight game – learning how to prepare myself for top-level competition in the fight, training with the best 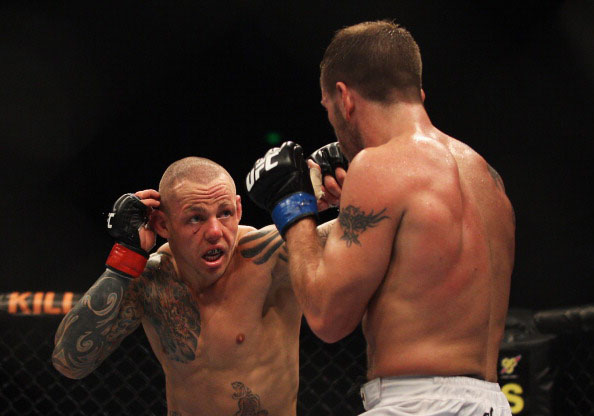 guys and the best coaches, and learning how this fight game works,” explains Pearson, who carries a 17-6 record into the Octagon against Guillard on Saturday.

“And dealing with the whole situation of being involved in big fights,” he adds. “I’m 29, and I think I’m just maturing and getting better as I get older. I’m coming into my prime, and I feel fitter, healthier, stronger than I’ve ever felt before, but now I’ve got the knowledge of how this game works, what it means to be the best, and what it takes to be a champion.

“It’s a rollercoaster ride being a mixed martial artist – highs and lows, ups and downs – and it takes a special type of person to take those lows and make them a high; make them a learning experience, and make them something you can use as a positive instead of a negative. I want to thank my parents and my coaches for helping me to turn those negative things into positive things, and use aspects of my losses to make myself better. It makes me work harder, makes me want it more.”

One thing he also wanted was to be a part of this weekend’s event in Manchester.

During his journeys around the globe, the one place Pearson hasn’t competed over the last four years is on home soil, and as soon as the UFC announced their intentions to return to Manchester, the man known as “The Real Deal” made it clear to the company that a fight at home was something he was after.

And a fight he’s going to get.

Saturday night, Pearson will share the cage with the enigmatic Guillard – a bundle of raw talent and ability who has yet to live up to the immense potential he showed when debuting with the UFC as a 22-year-old on season two of The Ultimate Fighter.

There have been impressive highs (dominant first-round wins over Dennis Siver, Evan Dunham, and Shane Roller) and frustrating lows (an early career suspension, four losses in five fights) for the Louisiana native, but a blistering second-round knockout win over Mac Danzig last time out has 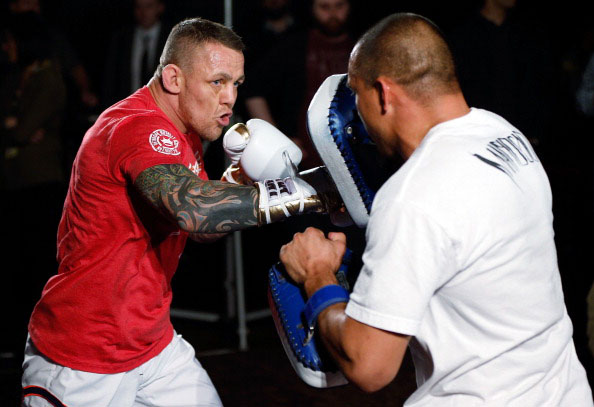 people once again wondering if the “Young Assassin” might also be primed for the best stretch of his career now that he’s a little older and wiser, just like Pearson.

“I put my hand up straight away that I wanted to fight in Manchester,” recounts Pearson, whose last appearance in the UK resulted in a second-round stoppage win over veteran Aaron Riley. “I said that I wanted to make this fight in Manchester a thank you to the fans and everyone that has supported me, and Joe Silva and the UFC have done an amazing job of matching me up with such an exciting fighter, which I know is going to deliver for the fans.

“For me (this fight is) massive. Going back, fighting at home, fighting around my hometown, my friends and family, everyone that was supporting me before I made to the UFC – even the guys that were following me around, watching us fight, supporting us when I was nobody – them getting to come to watch me fight on my home soil, it’s going to be a big night for me.

“I think (Melvin Guillard is) very dangerous, very explosive, and a very tricky opponent, but I think on the whole, I’m better than him everywhere. I think I can catch him. He leaves himself exposed to some of the things that I do, and I think I can capitalize on that.

“I feel that with the momentum that I’ve got going into this fight,” Pearson continued, citing the consecutive technical knockout wins over George Sotiropoulos and Ryan Couture collected in his last two outings, “I believe in my power, I believe in my speed, and I believe that it takes one shot, and I can finish fights.

“Each time you finish a fight, you get that added confidence – that extra excitement of wanting to go back into the gym and try and train and do new things. It’s a weird feeling. It’s a weird confidence 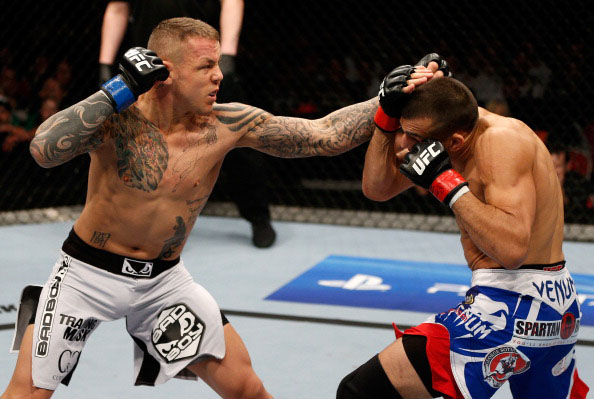 After years of learning – honing his skills, finding his footing, and developing into the fighter he is today – Pearson is ready to thank his family, friends, and loyal British fans in fitting fashion on Saturday night.