"I’ve been working hard for many, many years and now finally I’m happy and where I’m supposed to be." - Vladimir Matyushenko 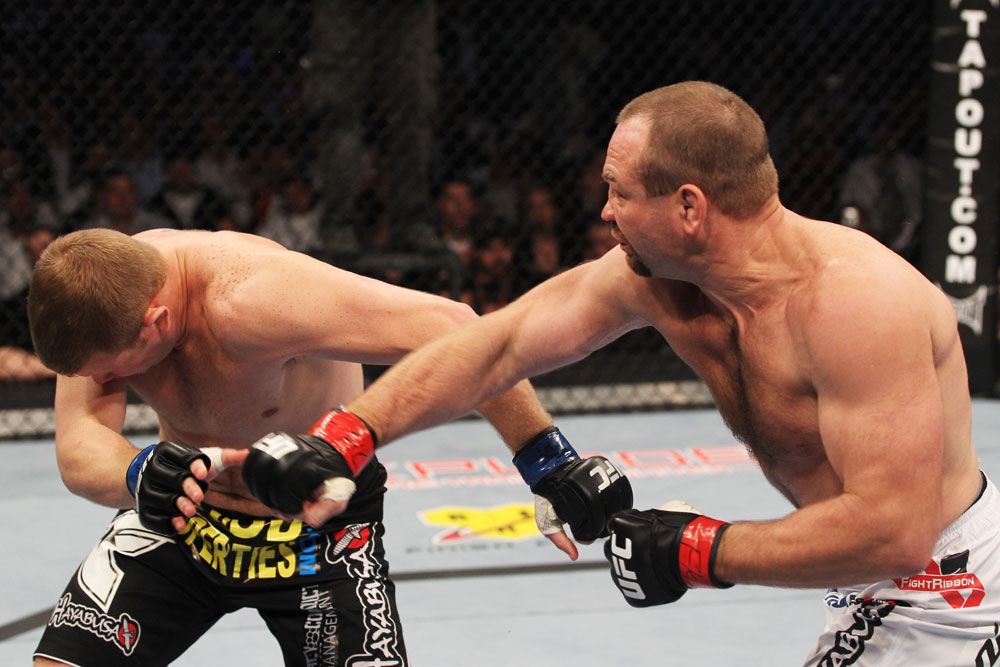 Other people’s funny stories involve someone breaking wind in yoga class or fainting before a ‘will-you-marry-me’ proposal. Vladimir Matyushenko’s notion of funny is telling you about the time he got his nose broken in a professional fight.

“I fought in Brazil in the Jungle Fights a few years ago against Carlos Barreto,” said the Belarus-born light heavyweight fighter. “It was in Manaus, in the Amazon. I got there and looked at him and thought, “Really, I’m gonna fight this guy?” He was a big guy (6’4”, 230 pounds) and I was fighting at heavyweight. We exchanged a few punches and he kicked me really hard. My hands were up, but he broke my freakin’ nose with his leg – but he broke his leg and I won the fight!! (laughs).

“He just fell down. He broke his leg or twisted his knee, I don’t know what happened, but he fell to the canvas and I was still standing. So I punched him a few times and they stopped the fight. He broke my nose but I won the fight.”

The blow left Matyushenko sporting a grossly crooked beak, but the plain-talking veteran’s sense of humor is as lively as ever. When you’ve been fighting 14 years professionally, and grew up scraping by in Belarus, you learn to see the lighter side of a very rigorous and often unforgiving sport. At 40 years of age, the barrel-chested pro is one of the UFC’s senior statesmen and he’s still formidable, as evidenced by him winning four of his past five bouts (Jon Jones being the lone blemish, far from something to be ashamed of).

Next up for Matyushenko, a former elite Russian wrestler who once beat U.S. icons Royce Alger and Kevin Jackson in the same tournament, is Alexander Gustafsson (12-1) of Sweden. The matchup is highly intriguing, partly because it harbors a potential referendum on just how good the highly-touted Gustafsson is, or isn’t. Jon Jones, the 205-pound kingpin, has looked superhuman inside the Octagon. But when fight fans are polled about which fighter stands the best chance of unseating him, Gustafsson’s name surfaces in the top five. The Swede knockout artist can match Jones’ length (Gustafsson is 6’5” to Jones 6’4”), but not Jones’ reach. Gustafsson is rather athletic and is dangerous with submissions as well.

Yet Matyushenko refrained from anointing Gustafsson as something special.

“He has a long reach, he’s young, athletic, whatever,” said Matyushenko (26-5), not sounding overly impressed, before stating the obvious. “I’m working my striking a lot, but I know if I take him down it will be a plus for me.”

Where does he rank Gustafsson among the light heavies?

“MMA has evolved so it helps to be tall with a long reach and at the same time be a strong guy, like Anderson Silva and Jon Jones,” Matyushenko said. “But there are other things involved. You have to be strong in your mind. Physically Gustafsson matches all the criteria, but can he do it? I guess that’s why people will be watching on TV, to see if he can do it.”

Since Matyushenko has faced Jones, I ask him whom he would peg as most threatening to the emerging superstar’s throne. I’m expecting one of the usual suspects to appear – former champ Rashad Evans or the unbeaten Phil Davis.

Who has the best chance to beat Jon Jones?

“Me,” Matyushenko says with a hearty chuckle, a glaring prognostication to anyone who watched Jones smash the Russian with elbows and finish their Aug. 2010 contest in under two minutes.

“I knew when I lost to him more than a year ago that he was The Real Deal,” Matyushenko said of Jones. “Do you want to step up and do it?”

Matyushenko continues to train in the Los Angeles area, working regularly with fighters such as Antoni Hardonk and Jared Hamman. He has also worked with Lyoto Machida and Fabricio Werdum, among others. Yet Matyushenko is not one to hop around from team to team, as many younger fighters do while proclaiming the variety helps their games.

“The camps don’t change,” he said. “When you have a good camp people come and go to you. I’m not the person who goes around and looks for people to train with; people come and train with me. I trained with Lyoto Machida for a long time. I was supposed to fight Gustafsson in August and I was training with Dan Henderson and Team Quest; we exchanged people, but then I got hurt.”

It is one of the downsides of being a week shy of 41; the body doesn’t heal and recuperate as quickly. Otherwise, Matyushenko thinks age stereotypes are exaggerated, though he concedes he used to believe in them when he was much younger.

“When I was 30 I thought, ‘Oh, it’s too late now,’” he said. “But to encourage the young fighters right now, no, it’s not too late. You can go very far (at an advanced age) but of course you need to take some precautions. There is a fine line between being in good shape and not being hurt. You have to rest more and train smart.”

He came to the U.S. many years ago with barely $100 in his pocket. He spoke virtually no English at the time.

“I bought a one-way ticket from New York to California and I’ve achieved so much, so I think it’s a big encouragement to kids. You can do whatever you want, especially right now,” he said. “The last two years have been good for me. I signed up with the UFC again, I bought a house, I got married in Vegas. My son graduated high school and he’s in the Air Force right now. I’ve got a dog. So a lot of good things have been happening. I’ve been working hard for many, many years and now finally I’m happy and where I’m supposed to be.

“MMA is on a roll and so am I. I am MMA and MMA is me. I like being part of me so I’ll stick around and do as much as I can do. This is what I do best. I don’t think there is anything I do better. If I find something that I do better, then I’ll probably quit or retire. But so far I enjoy it. I really enjoy being part of the UFC. Finally we’ve gotten through the tough times and I want to enjoy the ride.”