The Educated Feet of Katsunori Kikuno 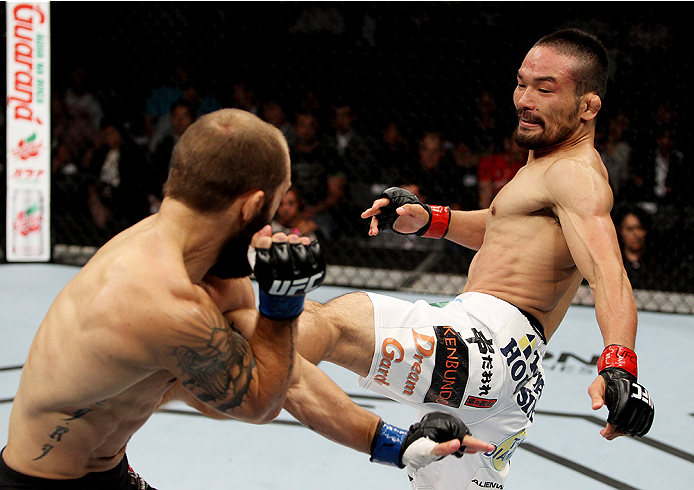 “Just like the Gracie Jiu-Jitsu in the past, if I have a skill that my opponent has no knowledge of, then my skill becomes very effective,” Kikuno said.

The 33-year-old Japanese striking specialist rose to prominence in his home country’s pro MMA scene and stayed at the top of it with his blistering array of punches and kicks, especially his kicks. Kikuno’s attack is constant as he batters his opponent’s legs and body at a variety of distances, which leads his foe to lower his defense for a crushing shin or fist to the face or a body kick that may drop the adversary and allow Kikuno to finish the fight on the floor.

With a 23-6-2 pro record including 15 finishes, like the second round rear naked choke he secured on Sam Sicilia in September at UFC Fight Night: Hunt vs. Nelson, Kikuno’s ability to grind his opponent down with his strikes en route to some form of stoppage is truly a uniquely impressive skill he has honed for years and that he believes he is only getting better at.
“From age 18 to 23, I trained in Kyokushin Karate, where hand strikes to the head were not allowed; therefore, my kicks improved there,” Kikuno said. “On top of this, my experience from MMA and also by taking up Okinawa Kenpo Karate, I believe my skill has evolved. Yes, there was a period in my career when I hesitated to use kicks because of the risk. Then, during this time, I started to think about how to reduce the risk and studied more on timing, distance, and angles. I am confident with my kicking power.” 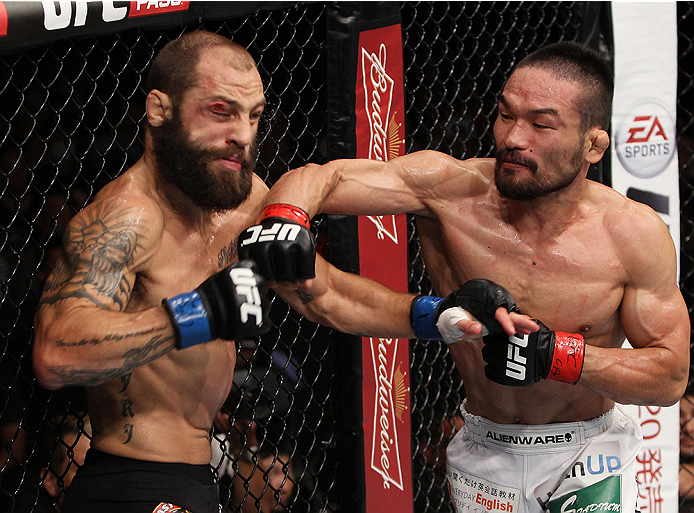 The educated feet plus his black belt in judo are now the UFC featherweight division’s problem to deal with, as Kikuno made a successful debut at 145 pounds with the submission of Sicilia. The first five minutes were a striker’s duel, with The Ultimate Fighter 15 alum’s body and legs getting more pink and red by the minute from the sting of Kikuno’s kicks. In the second, Kikuno showed his grappling skills by sneaking behind Sicilia in the clinch before tripping him to the floor and jumping on a rear naked choke.

All wins inside the Octagon are big, but this was extra special for Kikuno, as it was a commanding victory at his new weight and it was in his home country.

“It was my first featherweight fight and it was in the UFC Japan show,” Kikuno said. “In addition, I was coming off from a loss, so I did feel the pressure before the fight. However, I was able to enjoy the fight itself. He was a strong dangerous puncher, but we were about the same size, so I thought our fight styles should match well. My best weight class is featherweight. That is what I firmly confirmed in that fight. My mind, skill and body were all in good shape for fight. I felt light, and I had no problem in both the strength and cardio departments.”

Up next, Kikuno travels to Rio for a fireworks-friendly showdown with Brazilian knockout artist Kevin Souza at UFC Fight Night: Maia vs. LaFlare. Riding a nine-fight win streak that includes eight KOs, Souza is one of the most aggressive strikers one will ever see at featherweight, which was on full display in his Fight of the Night-earning second-round stoppage of Mark Eddiva last May. Owning a 15-3 pro record with 13 of those victories via strikes, it’s clear Souza will want to match his power in the stand-up game against Kikuno’s technique. 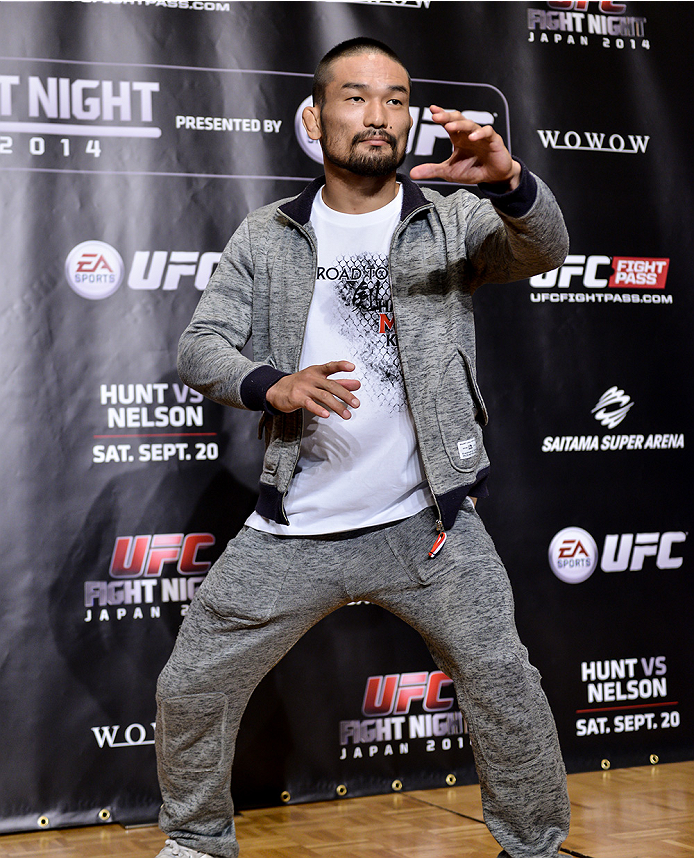 “He has a long reach and he’s a strong striker,” Kikuno said. “I think he is good at pressuring the opponent. I believe the key issue for me is to see if I can overcome the reach disadvantage. I would like to show a small man defeating a big man. Winning at the other side of the planet, in Brazil, against a strong opponent would have huge meaning for me. From this fight, I am just going to run up to the top.”

In preparation for Souza, Kikuno does the majority of his work at Alliance Square gym. His head coach is famed UFC and PRIDE veteran Tsuyoshi “TK” Kosaka, who oversees Kikuno’s MMA training and sparring with the likes of rising Japanese MMA star Yuta Watanabe. As for the grooming of his Okinawa Kenpo Karate, Kikuno trains with Yoshitomo Yamashiro, who has a Kenpo to MMA instructional DVD that Kikuno is heavily featured in.