Edson Barboza: Will a Star be Born?

"I like to give the fans a show. I love what I do." - Edson Barboza 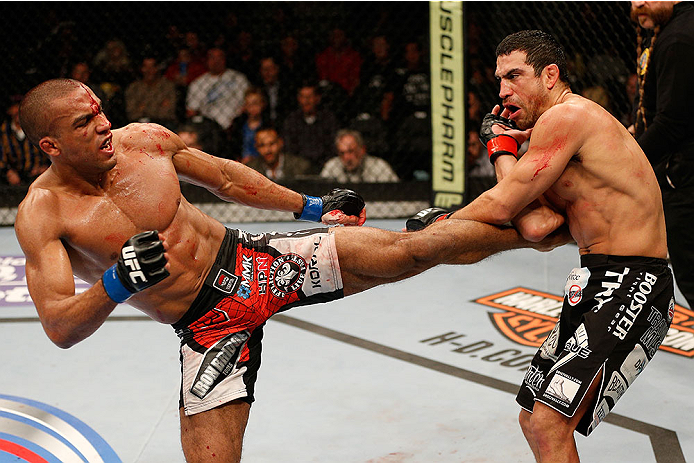 When you’re a flashy knockout artist, the kind of fighter that fills highlight reels again and again, the assumption is that when the going gets tough, that guy gets going...and not in a good way. But after a rough first round against Danny Castillo last December, Edson Barboza was faced with such a dilemma, though it wasn’t a dilemma to the Brazilian standout.

“As soon as the first round finished, I ran to the corner and I felt I was good,” he said. “When I got there, Ricardo Almeida said I should recover and do my game, and that was what I did. I did my game.”

His game was good enough to win the next two rounds and earn him a majority decision victory and Fight of the Night honors, as well as prove that when the going gets tough for this lightweight, he’s just getting started.

“I just thank God for giving me strength and keeping me healthy,” he said. “I felt very blessed to have had this win and also to have such great people at my corner. I want to be the champion. I know I have the skills and the team to get there. Winning that fight I showed I have the heart and the determination to be the champion. I knew if I won that fight, I would have another big fight coming up. So I gave all I could inside the cage. I love fighting. I love being in the cage. I've been doing this since I was eight years old. So I grew up with fighting in my veins.”

The war with Castillo was the kind of bout every fighter needs to have in his back pocket if he wants to take things to the next level. Of course, it’s nice to walk through everybody, but eventually you run into someone who won’t go away, and how you react when that happens shows what you’re truly made of.

“I learned a lot of things,” said Barboza. “Actually, this is that type of fight which puts a lot of things on the table. Fighting against Castillo I could improve my game and my cardio, and I put all my heart in there.”

The win made it three straight since his lone pro loss to Jamie Varner in 2012, and coupled with his five post-fight bonuses, the 28-year-old has become a must-see for fight fans, so it’s no surprise that he’s landed on this Saturday’s UFC on FOX main card against Donald “Cowboy” Cerrone.

Cerrone, the all-time Zuffa (UFC / WEC) leader in post-fight bonuses, can relate to Barboza’s sentiments, making their bout one of the most highly-anticipated of the year thus far.

“Cerrone is a good fighter and a good striker,” said Barboza. “Let's see what difficulties I will present to him. But I know it will a war, and I have been training really hard for this fight.”

Included in his training team for this fight is a familiar face in former opponent Anthony Njokuani, who Barboza won a Fight of the Night decision over in March of 2011. Add in his usual crew, which includes Ricardo Almeida, Renzo Gracie, and Valor Martial Arts, and the Nova Friburgo native is covering all the fighting bases, showing just how important it is for him to secure the win.

And if he gets it, you would have to assume that he will be put into the conversation for a shot at the 155-pound crown.

“I guess so,” he says humbly. “I am looking forward to being the champion. I know a win over him would put me closer to a title shot and I will give more than my best to get this win.”

Highlight reel knockouts. Gritty Fight of the Night wins. A nationally-televised battle with another lightweight action hero. It all sounds like Edson Barboza’s profile is going to get a lot higher soon, and considering that it already has taken off since his UFC debut in 2010, how is he dealing with the added attention?

“My wife, Bruna Barboza, is a big part of it,” said Barboza. “She does my PR and she has been making me speak. (Laughs) It's easier for me to talk in Portuguese, which is my language, but with her help I have been improving my English. I know it's important to be in touch with my fans, and living in the US, each day I feel more comfortable speaking in English.”

He’s going to need it, because this train doesn’t seem like it’s going to be slowing down anytime soon. And that’s just fine with him.