Veteran Views Saturday's UFC 262 Bout vs Burgos As The Most Crucial Of His Career
By E. Spencer Kyte, on Twitter @SpencerKyte • May. 11, 2021

When it comes to television and films, I’ll watch anything even tangentially related to mixed martial arts because in addition to having an unhealthy obsession with this sport, I also enjoying seeing how the sport is portrayed and what, if any, actual competitors will pop up as performers.

So when the trailer for Born A Champion came out late last year, there I was, sitting at my desk, turned into the living Leonardo DiCaprio meme from Once Upon A Time… In Hollywood, shouting and pointing at the screen when UFC featherweight contender Edson Barboza popped up on my screen.

“Hey, it’s Edson!” my brain reacted, seeing the familiar face of an athlete I’d spoken to on numerous occasions in the past in a Hollywood flick about a retired Marine and Brazilian jiu-jitsu practitioner that gets pulled into the MMA world. Only the guy on the screen behaved nothing like the humble, respectful athlete I’d come to know.

“He’s a different guy,” Barboza said with a laugh, discussing his character Marco Blaine, whose only resemblance to the man portraying him is physical. Where Blaine is a cocky antagonist who breaks rules and at one point sports a full-length fur coat, complete with a hood, the UFC veteran bringing him to life on the screen is a true good guy — a dedicated professional and proud family man who likely wouldn’t have donned such a gaudy, flashy coat even if it were his only option to help deal with the frosty climes he dealt with for years while living in New Jersey.

“It was a fun experience and I really enjoyed that experience,” added Barboza, who returns to the Octagon against Shane Burgos in an intriguing matchup on this weekend’s UFC 262 pay-per-view main card. “It was a good opportunity. It was so much fun and the movie is really nice.”

As much fun as Barboza had making his acting debut, the veteran standout didn’t have as good a time in his featherweight debut last spring. 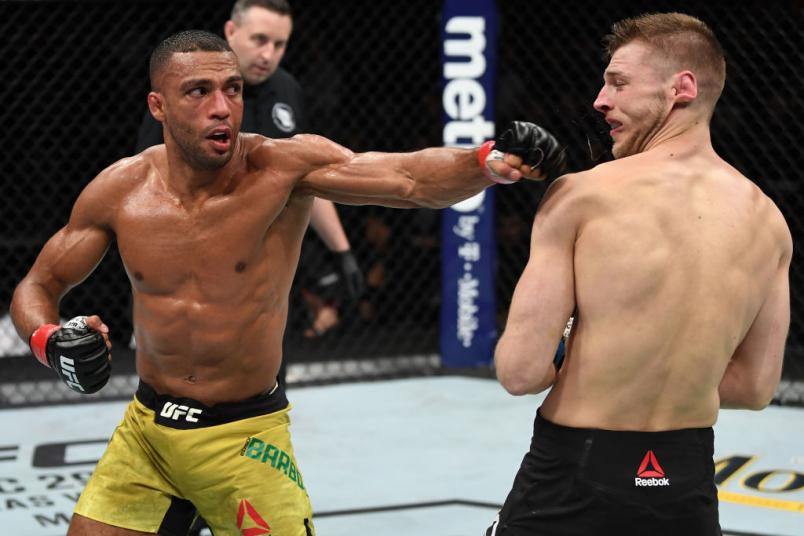 Edson Barboza punches Dan Hooker of NZ in their lightweight bout during the UFC Fight Night event at Fiserv Forum on December 15, 2018 in Milwaukee, Wisconsin. (Photo by Jeff Bottari/Zuffa LLC)

Following a lengthy lightweight run where he was a fixture in the Top 10, the 35-year-old opted to drop down a division and bring his talents to the 145-pound ranks last year, landing opposite Dan Ige in his debut.

Much like his final fight at lightweight, his first appearance in the featherweight division left a sour taste in Barboza’s mouth as he came away on the unhappy side of a split decision verdict, which extended his losing streak to three and left him with just a single victory in his previous six bouts.

“(Losing a fight like that) is so difficult because I train so hard, I always give my best, and when something like that happens, it’s so frustrating — not only for me, but for my team, for my family,” said Barboza, reflecting on the loss to Ige.

While the result was disappointing, the silver lining to the experience was that the Brazilian veteran made the 145-pound weight without issue and felt good coming out of the contest.

After being admittedly nervous about both making weight and how he would perform heading into the bout, the South Florida-based fighter was excited about his future prospects in the featherweight ranks once the frustration of the loss dissipated.

“The first fight was so scary because it’s the first time in a long, long, long, long, long time I dropped to ’45 to fight,” said Barboza. “I was scared to get tired and scared to lose my strength or something like that, but after the first one, I talked to my team and said, ‘I want to stay at 145 because I fought three rounds, I feel great, I know I can push more and do a better job’ and you saw that in my last fight.”

Just under five months after the disappointing loss to Ige in Jacksonville, Florida, Barboza traveled to Abu Dhabi. Originally scheduled to face emerging prospect Sodiq Yusuff, the American Top Team representative shared the cage with Makwan Amirkhani instead after the veteran stepped in for the injured Contender Series graduate.

Once again, the fight went the distance, but this time, when the final horn sounded, there was no doubt that Barboza was the victor… at least not as far as everyone besides Barboza was concerned. 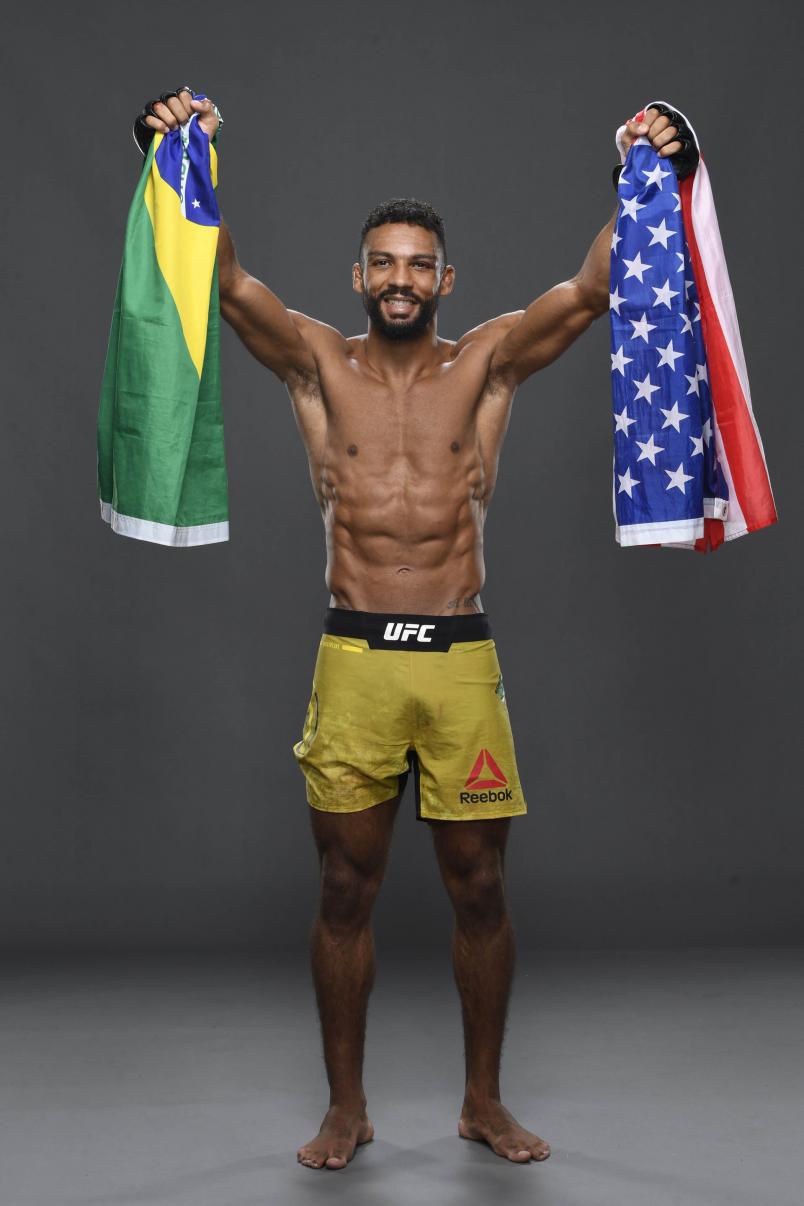 “I remember when I finished that fight, I was thinking about it and my coach was saying, ‘It’s impossible!’ but I was still scared,” he said with a laugh. “I was so scared because you never know.

“Thank God they called my name,” he continues, letting out an exaggerated sigh of relief similar to the one he delivered after hearing the words “unanimous decision” followed by his name on October 11. “I was very happy, but I know that’s part of the job — I go there, give my best, and if you leave it in the judges hands, that happens.”

Another “part of the job” that Barboza has come to understand and appreciate is the reality that he not only needs to train his body, but also focus on training his mind as well.

Always in phenomenal shape and a diligent worker in the gym, the explosive Brazilian has always had the physical tools to be a perennial contender, but with the addition of a new mental coach, the 35-year-old veteran believes he’s found the missing piece that will allow him to take the next step forward in his career and reach new heights in his new division.

“I train with a new mental coach named Lincoln Nunes — he’s a Brazilian guy that trains a lot of Olympic guys in Brazil, and he’s really changed my mindset,” began Barboza, who has fought one of the toughest slates of any non-titleholder on the UFC roster. “Any time I question myself, he removes those questions. He’s a big part of my team right now.

“When I was young, I always killed myself. I always believed that every single day, I need to kill myself in the gym, and today I know I don’t need this because I’m always in shape, I’m always ready. I’m training hard, like always, but now I focus on (the mental side of things) because when you need to fight with your hands and your legs, it’s easy, but fighting with the mind is hard. 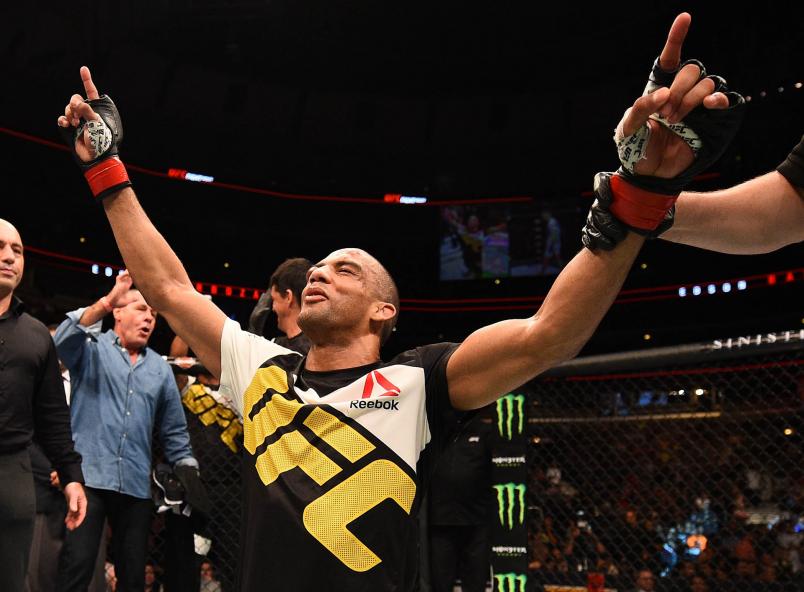 Edson Barboza of Brazil reacts after his unanimous-decision victory over Paul Felder in their lightweight bout during the UFC event at the United Center on July 25, 2015 in Chicago, Illinois. (Photo by Jeff Bottari/Zuffa LLC/Zuffa LLC via Getty Images)

Rejoicing in the victory over Paul Felder July 25, 2015 in Chicago, Illinois. (Photo by Jeff Bottari/Zuffa LLC)

“I figured this out my last couple fights, and you guys are going to see the best Edson Barboza,” he added. “I’ve worked for the UFC for a long time, and I think the time is now. The time for me to get a title shot, to fight for the belt, to be featherweight champ is now.”

Barboza isn’t saying any of this just to hype himself up and give him added motivation heading into Saturday’s showdown with Burgos, who sits at No. 9 in the featherweight rankings and enters the contest off a narrow loss to Josh Emmett in a terrific clash last summer that earned Fight of the Night honors.

Having shared the Octagon with former champions and perennial contenders like Donald Cerrone, Tony Ferguson, Anthony Pettis, and Khabib Nurmagomedov (to name but a few), the 30-fight veteran genuinely sees this weekend’s matchup as the most crucial bout of his career.

“This is the most important fight of my life,” he said earnestly. “I will give my best because I want to be champ and I don’t have much time to lose, and that’s making me very motivated.