"If I feel that by kicking I will be able to finish the fight, then that's the way I will keep going; if not, I will try to find another way." - Edson Barboza 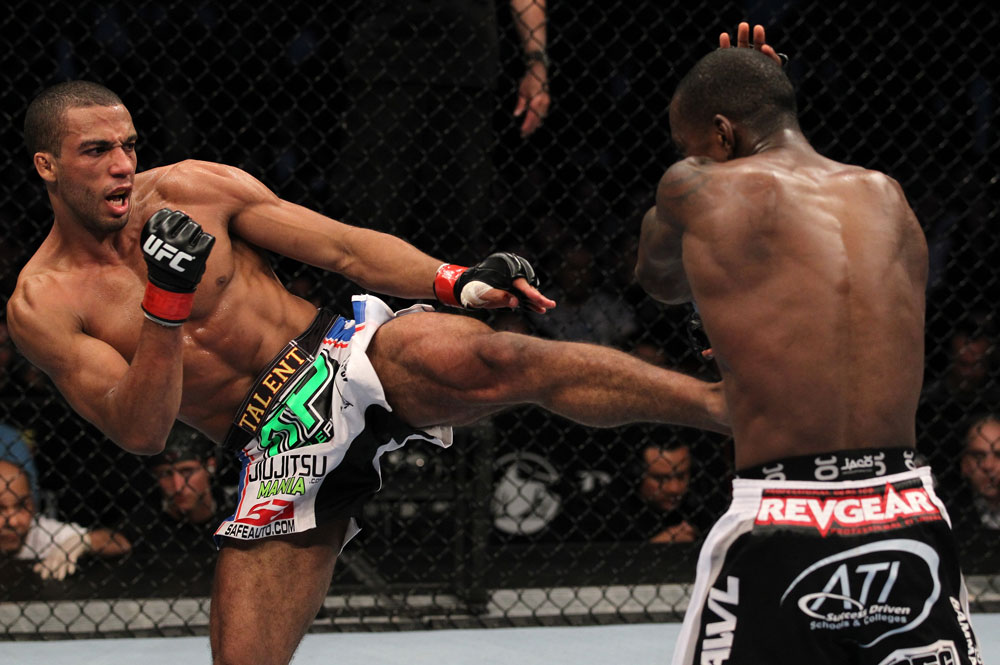 Usually, the best ones never brag. They don’t need to. Why? Because no matter what Edson Barboza says about his leg kicks, nothing would ever do them justice like catching one on the inside of your leg or the outside of your thigh.

In one of the more apt descriptions of this underrated and underutilized weapon, UFC heavyweight Pat Barry once described catching one of his leg kicks as akin to stepping on a land mine. Barboza’s opponents can probably relate, and just the idea of going through three rounds or less (usually less) of such an ordeal can not only leave you in pain for the next couple weeks, but can also change your opinion of the vocation you’ve chosen in life.

Barboza’s first UFC victim, Mike Lullo, knows all about those kicks. So does Anthony Njokuani, and he’s a Muay Thai expert like the Nova Friburgo native. But when you ask the 25-year old about their importance in his game, he issues a statement that has to be a chilling one to prospective opponents, simply because he admits that we’ve only seen a fraction of his game thus far.

“I always train kicks during my Muay Thai training, and I do that a lot,” he said. “But when I'm fighting, I just think about finding a way to finish the fight, and it doesn't matter if it's going to be by kicks or by knockout or by submission. If I feel that by kicking I will be able to finish the fight, then that's the way I will keep going; if not, I will try to find another way. Kicks can be a big part of my game, but not the only one.”

Against Lullo at UFC 123 last November, Barboza drilled his opponent with kick after kick until the fight was finally halted in the third round. But in his UFC 128 bout with Njokuani, he showed off those other aspects of his striking game, combining with “The Assassin” for a Fight of the Night battle that was an exciting advertisement for the art of eight limbs. It’s a discipline that has been part of Barboza’s life since he was a child, but only now, eight fights into his pro career, is he beginning to truly mesh his Muay Thai into the MMA game.

“I've been training Muay Thai since I was eight years old, I competed in huge events in Brazil, and I got experience doing that,” said Barboza. “Today I'm training Muay Thai to MMA, and it is different; in other words I have not thought of Muay Thai by itself but I'm thinking about adapting it to MMA.”

25-3 in Muay Thai with 22 knockouts, Barboza ended 17 of those fights in the first round, and his aggressive style has been a testament not only to heroes within kickboxing, but in MMA as well.

“I like Andy Souwer when I'm talking about influences in Muay Thai and I am a big fan of Rodrigo Minotauro (Nogueira), Wanderlei Silva and Anderson Silva, because these guys are warriors, they are great fighters and they make great fights. They are my biggest influences in MMA.”

But the meshing of the two styles needed some work, and to aid in that adjustment, Barboza has been working closely with renowned striking coach Mohamed Ouali, who has been the man in the corner and the gym for many of the top fighters training out of South Florida these days.

“My coach Mohamed Ouali has been doing a great job with me about Muay Thai training since I came over to MMA,” said Barboza. “I think my posture and my adaptation from Muay Thai to MMA and my grappling game have been my biggest adjustments to my MMA career.”

Against Njokuani, he pulled out all the tricks when it came to striking, and despite the back-and-forth nature of the bout, one in which both lightweights got their fair share of shots in, Barboza enjoyed the battle.

“Njokuani is a great fighter, he has a great Muay Thai too, and it was good because we were able to do a war inside the cage, and give a big show for the UFC fans.”

A stellar knockout and an action-packed war. You couldn’t have scripted a better career opening than Barboza has had thus far, and it was a star-making turn for him to say the least. On Saturday, the ante gets upped even more when he steps into the Octagon in Rio De Janeiro to face former Ultimate Fighter winner Ross Pearson.

Said Barboza of his opponent, “Pearson is a great fighter and he also likes to fight stand up. But I'm focused on own my game and what I need to do.” Yet beyond the pleasing stylistic matchup, the fight is a main card bout that will announce Barboza’s arrival to the next level should he win. That’s almost as big as a title bout for a young fighter, but he’s keeping his cool.

“I am doing my best in my training and when I am into the cage I give my 100%,” said Barboza. “I fight whoever the UFC wants, I want to fight against the best fighters and I'm training really hard for that. But now I'm just thinking about my next fight and I'm focused on my fight against Ross Pearson.”

This is really where the fun begins though. A win over a quality fellow prospect like Pearson won’t answer all the questions about Barboza. No, a victory this weekend will only kick off a new set of them. How soon will he find his way into the title picture? How does he match up with so and so, etc. But the two most prevalent queries will center on his unbeaten record and his ground game, neither of which have been tested yet. Thankfully, the affable Barboza isn’t shy about addressing either topic.

So when it comes to the pressure of keeping that “0” in the loss column, he says he doesn’t feel any added weight on his shoulders.

“No, the pressure stays outside of the cage, because when I go into the cage, it is the same show, the same rules, and just my opponent and I. I just want to enter the cage and do my best.”

And about his ground game, the Brazilian Jiu-Jitsu purple belt is equally unconcerned about what people say. He knows that he’s put the work in, and he’s ready for anything thrown at him.

“Man, I have been training jiu-jitsu and wrestling a lot,” said Barboza. “I'm training at Pablo Popovitch’s gym and at Imperial Athletics, and it has been really good to make my grappling game stronger. My grappling coach, Eduardo Guedes, has done a great job and I have great grappling partners like Pablo Popovitch, Vagner Rocha, Rafael Chaves, Roberto Abreu Cyborg, so I'm getting more confident on my game on the floor. As I said before, I don't think about doing the fight on the feet or on the ground, I just try to find a way to make the fight more comfortable for me.”

And uncomfortable for his opponents. So could there be any place more uncomfortable for an Englishman than an Octagon in the middle of Rio De Janeiro while you’re fighting a Brazilian? Probably not. But then again, fighting Edson Barboza anywhere isn’t the way you really want to spend your Saturday night.

“As I always say, I can feel the energy coming from my fans anywhere in the world,” he said. “But of course that (fighting in Rio) will be more intense and it will be amazing for sure.”