Coming Off Of An Emphatic Knockout Win Over Featherweight Shane Burgos In May, Edson Barboza Is Prepared For Anything That Lies Ahead, Including Giga Chikadze
By McKenzie Pavacich, on Twitter @mpavacich_ • Aug. 27, 2021

As expected, Edson Barboza is feeling confident and ready to step back into the spotlight for his third UFC main event this weekend in Las Vegas.

It might be a little easier to say coming off two wins and a performance bonus in his most recent fight, but you can tell that if you were to ask the 35-year-old at any point in his career if he loved his job, he would give a genuine answer, and it would likely sound the same. 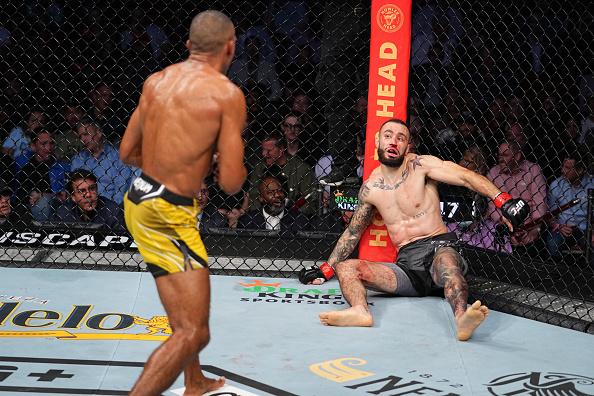 Shane Burgos falls back after taking punches from Edson Barboza of Brazil in their featherweight bout during the UFC 262 event at Toyota Center on May 15, 2021 in Houston, Texas. (Photo by Josh Hedges/Zuffa LLC)

Loving your job makes it far easier to do it well — something the Brazilian has been the living example of during his more than decade long tenure in the UFC, with his most recent example being put on display against Shane Burgos at UFC 262 in May.

“That’s my favorite part of the game: the fight,” Barboza said. “The (Burgos) fight was a great fight, I hope it’s going to win Fight of the Year. Shane’s a tough guy, and me and him showed a great war.”

It was a three-round war that ended in a memorable, albeit peculiar, way when Barboza landed a right cross, leading to a delayed-reaction knockout just over a minute into the third round, and of course an extra $75,000 for both fighters with their Fight of the Night bonus.

With ten performance bonuses and two UFC main events under his belt over his 11-year career in the Octagon, Barboza knows that although his next opponent is fairly new to the spotlight, it’s not someone he can overlook in Giga Chikadze.

“Everything’s new to him but, at the end of the day, it’s most important to fight. This is a great fight, he’s a great fighter,” Barboza said. “As a fighter, I’m a big fan. I like to watch some good fights, and he always shows a good fight. He’s a great striker, he’s looked great in his last couple of fights, and that’s what got him to a main event.”

Riding an eight-fight win streak and coming off a win over another UFC veteran in Cub Swanson, Chikadze will be the fourth fighter to welcome Barboza to his new home in the featherweight division.

“I feel like this is the right place to be, right now. I think I changed divisions at the right time,” the Muay Thai and Taekwondo black belt said. “God knows everything. I was doing really well at 155, fighting against the best guys in the world, but I think I moved to featherweight at the right time.”

With just a split decision loss to Dan Ige to go against his dominant victories in the featherweight division, “Junior” said he is excited to once again put his work on display.

“I feel faster, stronger, and most importantly smarter at 145. I’m in the best shape of my life. Be ready for the best Edson Barboza to step into the Octagon.” 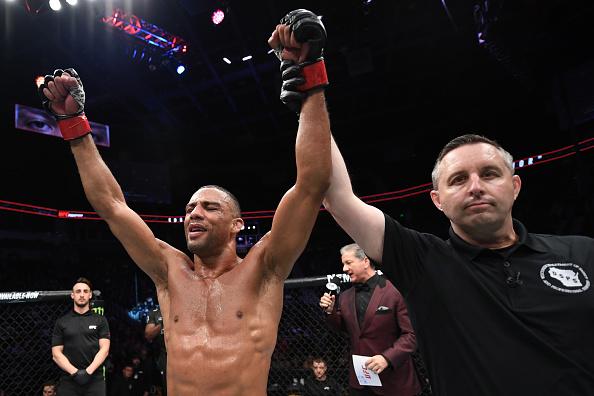 Edson Barboza of Brazil celebrates his victory over Dan Hooker of New Zealand in their lightweight bout during the UFC Fight Night event at Fiserv Forum on December 15, 2018 in Milwaukee, Wisconsin. (Photo by Jeff Bottari/Zuffa LLC)

Despite the confidence, Barboza knows he still has to be wary of the opponent standing opposite the Octagon to him.

“I need to be careful, he’s very dangerous. He’s a very good striker, he throws some bombs, he kicks very well, he has good hands, but it’s an MMA fight, you never know,” he said. “He might try to take me down but I’m ready. Wherever this fight might go, I’m ready. He’s a very dangerous fighter but I show this many many times that I’m dangerous, too. I hope he doesn’t blink.”