Edson Barboza Has All The Time In The World

Featherweight veteran Edson Barboza continues to roll with the punches as he prepares to face Bryce Mitchell at UFC 272: Covington vs Masvidal
By Miguel Navarro III, on Twitter: @migsnavarro15 • Mar. 4, 2022

After an unsuccessful outing against Giga Chikadze in the summer of last year, Brazil’s Barboza makes his 27th walk to the Octagon this Saturday. Over the last 12 years, he’s tasted the epic highs and lows that come with professional fighting. But with time and age, the 36-year-old has learned how to leave things in the past.

“That fight (against Giga Chikadze) hurt me a lot because I was super prepared. I knew everything. I felt in the first two rounds, ‘Whatever this guy throws at me, I’m ready.’ He got a good shot in, and the fight was over. But one thing I learned, when you get older and you’ve had all these years in the UFC, it’s over. Now, you have to think about the future. That’s why I’m here, to get my W back.”

The Brazilian kickboxer competed in the UFC’s lightweight division from 2009-2019 and holds wins over some of the most elite at 155 pounds: Anthony Pettis, Beneil Dariush, and Paul Felder, just to name a few. But no longer the 24-year-old breaking into the UFC, Barboza finds himself facing the next generation of fighters.

For his next assignment, the veteran meets 27-year-old grappling wizard Bryce Mitchell. On the cusp of breaking into the Top 10, Mitchell, is currently undefeated in the UFC with five wins. He is a young fighter on the rise looking to stake his claim as a real contender in the featherweight division with a win over a veteran like Barboza, who currently sits as the 10th ranked 145-pounder.

Order UFC 272: Covington vs Masvidal For On Any Device!

“Bryce Mitchell is a great fighter. I’ve watched his last couple fights. He’s a great grappler. He’s young and hungry. He’s one of the best in the world. It makes me very happy because the UFC always gives me a chance to prove myself against the best guys in the world.”

His opponent on Saturday is well known for his sneaky submissions and grit, and the Arkansas native is one of only two fighters to ever win in the UFC by the twister submission. Well aware of the threat his foe presents on fight night, after a perfect training camp, Barboza is ready for whatever is thrown at him. 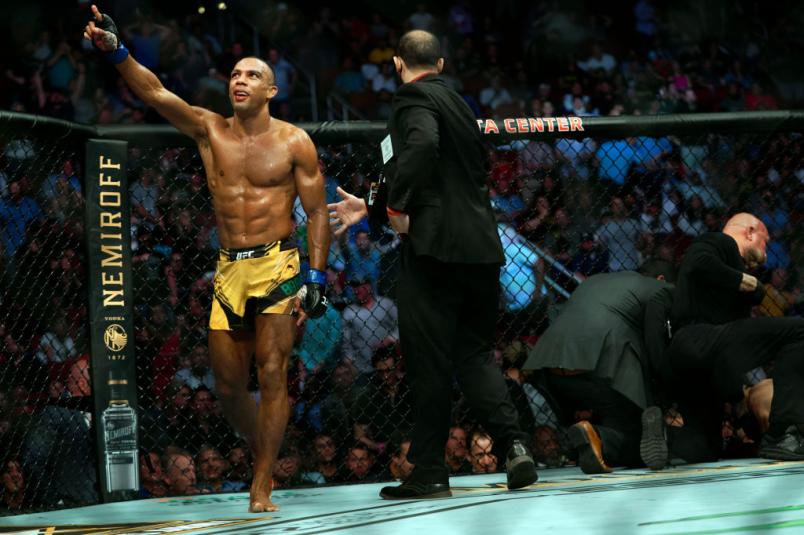 Edson Barboza of Brazil reacts after defeating Shane Burgos in their featherweight bout during the UFC 262 event at Toyota Center on May 15, 2021 in Houston, Texas. (Photo by Cooper Neill/Zuffa LLC)

“My biggest focus this camp is to be Edson Barboza. I always work super hard, and it’s been one of the best camps of my career because from the beginning to the end of camp, I was healthy every single day. I’m feeling great.”

If Saturday isn’t Barboza’s night, the Brazilian won’t pay much mind to it. In a sport where there is currently a 42-year-old world champion (Glover Teixeira), time doesn’t seem to be as much of a concern for the current crop of fighters. For some of these men and women, these are the years where you fight at your best and then it becomes the time to finally put all that experience to use.

If there’s one thing Barboza wants the next the generation of fighters to know, it’s that a loss isn’t the end of the world. Learn from it, then move on. But most importantly, in a sport that can be so unforgiving, yet so rewarding, make sure to love every moment of the journey. Not only is that how you find the key to success in this sport, it’s also how you find longevity.

MORE UFC 272 : Masvidal Is Determined To Wreck Covington | Fight By Fight Preview | Fighters On The Rise

“People talk about retirement, but it never passed my mind because I’m still feeling good, I’m feeling healthy. I think that’s the most important thing I’ve learned as I’ve gotten older. Feeling healthy, taking care of my body, and my mind. You guys are going to see Edson Barboza for a long time.”

Regardless of what happens at UFC 272, Edson Barboza will learn from this fight, then challenge himself again. It’s what he does best, and you can believe he’ll be loving every step of the journey.

Don't miss any of the action from UFC 272: Covington vs Masvidal which airs exclusively on ESPN+ at a special start time on Saturday, March 5th, 2022. The early prelims kickoff at 3pm PT / 6pm ET, followed by the prelims at 5pm PT/ 8 pm ET. The main card will begin at 7pm PT /  10pm ET and will air exclusively on ESPN+.