Edson Barboza's last two trips to the Octagon have resulted in split decision losses. He doesn't plan on letting it get to the judges on Saturday at Fight Island
By E. Spencer Kyte, on Twitter @SpencerKyte • Oct. 7, 2020

Edson Barboza and Marlon Moraes have known each other since the two were youngsters growing up in Nova Friburgo.

As kids, they trained together, competed alongside one another, and dreamed of turning their shared passion for Muay Thai (and combat sports in general) into a way to provide a better life for themselves and the families they would one day have.

Both men relocated to the United States to pursue a career in mixed martial arts, and after initially setting up shop in South Florida, Barboza eventually brought his family to the East Coast, where he would train alongside his long-time friend and numerous other elite talents under the guidance of Mark Henry and Ricardo Almeida.

After several years and a great deal of success, Barboza moved back to Florida, where he joined the all-star cast at American Top Team. Last year, following his bantamweight title loss to Henry Cejudo, Moraes and his family did the same; the two kids from the Brazilian mountain city reunited in “The Sunshine State,” where they once again train side-by-side and raise their families alongside one another.

This weekend in Abu Dhabi, the duo will compete together in the UFC for the first time, with Barboza facing Makwan Amirkhani in the co-main event, and Moraes taking on Cory Sandhagen in the headlining clash.

“If you would have told me this a few years ago, I wouldn’t believe you; it was a dream,” Barboza said of having the opportunity to close out a fight card with Moraes. “We’ve known each other a long time. We used to train together, compete in small events in Brazil for no money, so to do this is amazing.”

But it’s about more than simply competing on the same show.

“I don’t have any family in the United States,” began Barboza, who makes his second start in the featherweight division this weekend. “He’s my family. He lives five minutes away. His kids play with my kids. My wife and his wife are very close.”

Even without articulating it fully, it’s clear the impact Moraes and his family relocating to South Florida alongside the Barboza clan has had on the veteran contender, who has struggled to earn positive results inside the Octagon of late.

Barboza enters Saturday’s contest with just a single win in his last six outings, but those raw numbers alone do not paint a complete picture of things.

He closed out 2017 with a unanimous decision loss to reigning, unbeaten lightweight champion Khabib Nurmagomedov at UFC 219, then suffered a fifth-round stoppage loss to Kevin Lee four months later in a fight where he had the former interim title challenger on rubber legs earlier in the contest. He got back in the win column with a hard-fought, three-round finish of Dan Hooker at the end of 2018, but then kicked off his 2019 campaign with a first-round knockout loss to interim lightweight champ Justin Gaethje. 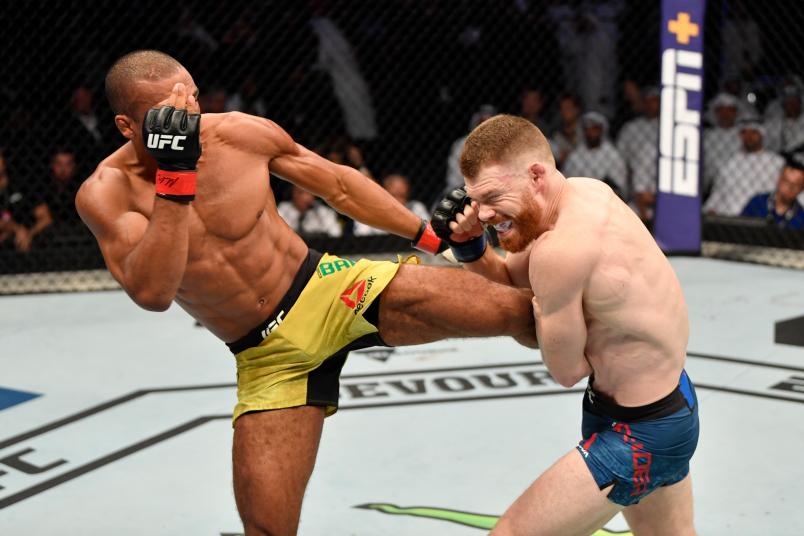 Six fights against two champions, three contenders, and a rising star in the 145-pound weight class, and all Barboza has to show for it are one win and a world of motivation heading into this weekend’s clash with Amirkhani.

“I know I won those fights,” he said of his losses to Felder and Ige, where the former saw 30-27 scores on either side with a 29-28 for Felder serving as the deciding tally, while the latter featured 29-28 scores across the board, with two judges awarding the tight contest to the streaking Hawaiian.

“I was frustrated for one or two days,” continued Barboza, who has taken home seven Fight of the Night bonuses and authored one of the most impressive knockouts in UFC history when he stopped Terry Etim in the third round of their clash at UFC 142 with a stirring spinning wheel kick that remains a sight to behold. “But I watched the fights, I saw (most observers) thought I won the fights, so I’m okay.

“It’s just motivation,” he added. “I just have to go out there and not let it go to the judges. You never know when you leave it to them, so I have to go and get a finish and not leave it up to them.”

Saturday’s contest was originally supposed to see Barboza square off with Sodiq Yusuff, but the promising Contender Series graduate was forced to withdraw from the bout, opening the door for the mercurial Amirkhani to make his second appearance on Fight Island.

Back in July, the stylish 31-year-old scored a first-round submission win over Danny Henry at UFC 251, lacing up an anaconda choke and putting the British fighter to sleep in just over three minutes. It was an impressive rebound performance following his UFC 244 loss to Shane Burgos in New York City last November, where he started quickly, but faded fast before being stopped late in the fight.

“I remember he has a real quick finish; eight seconds or something,” Barboza said when asked how much he knows about his fill-in opponent, correctly citing how long it took Amirkhani to stop Andy Ogle in his promotional debut at the start of 2015.

And after admittedly being a little nervous about making the cut down to the featherweight limit for the first time ahead of his bout with Ige in May, the 34-year-old Barboza is brimming with confidence and feeling better than ever heading into his second appearance in the 145-pound weight class.

“I was a little scared — I’ll be honest — the first time,” he said of venturing down in weight earlier this year following more than a decade competing in the lightweight ranks. “Now, I feel good; I have no worries.”

Motivated by his frustrating recent results, confident after maintaining his speed and conditioning through his move down in weight, and bolstered by competing alongside his friend of more than 20 years for the first time in the UFC, Barboza believes that Saturday night will be his best performance to date.

“You guys are going to see the best Edson Barboza,” he said confidently. “You’ve got to watch. You will see.”