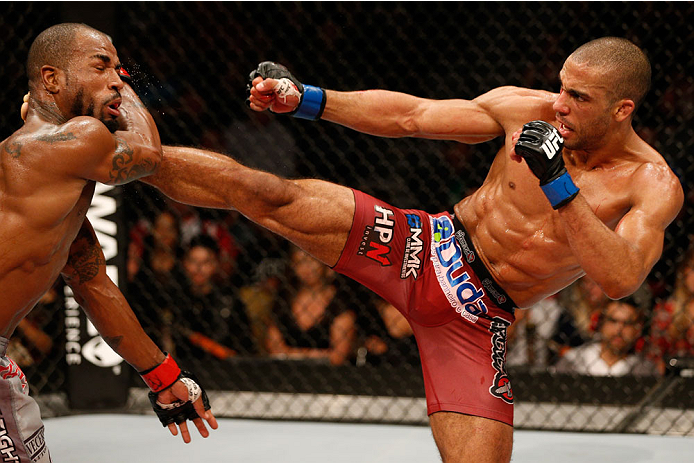 Edson Barboza has had a busy few months.

In November, he traveled to Austin, Texas to share the Octagon with Bobby Green in a pivotal matchup in the highly competitive 155-pound ranks. Prepared for the California native’s in-fight commentary track, the Brazilian employed a stick-and-move approach that produced a unanimous decision victory and a promotion to No. 6 in the lightweight rankings.

A few weeks later, he became a father for the first time, as his wife Bruna gave birth to a happy, healthy baby boy the couple named Noah.

Late last month, the proud new papa celebrated his 29th birthday with friends and family in New Jersey, enjoying a home cooked meal, but passing on the cake as this weekend’s showdown with Michael Johnson hovered on the horizon.

“I didn’t enjoy the cake at the time, but after my fight I may have one,” Barboza says before he carries a 5-1 record over his last six fights into his third consecutive co-main event assignment in Porto Alegre, Brazil against Johnson.

The surging contender’s path to the UFC was a little different than the traditional route taken by many of his countrymen.
> See Edson Barboza's fighter profile

While the majority of Brazilian fighters on the UFC roster honed their skills at home, competing in regional fights in any number of organizations in the sprawling MMA hotbed, Barboza cut his teeth in the United States. He debuted in Tampa, Florida before picking up five more stoppage wins, three in New Orleans and two in Atlantic City. The first time he fought professionally in Brazil was UFC 134 against Ross Pearson. 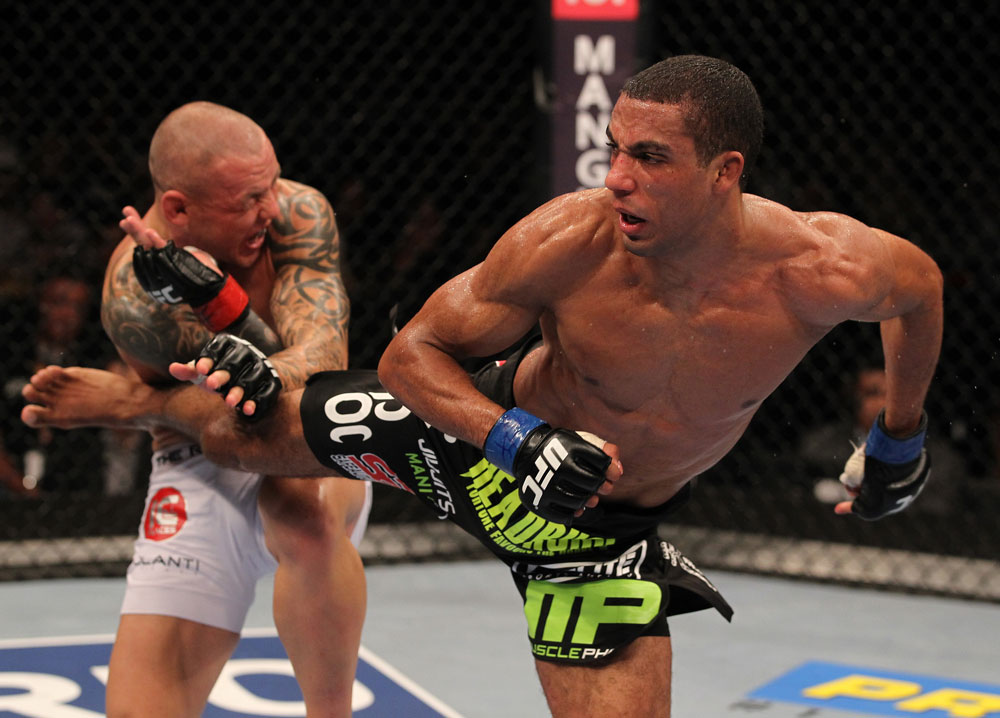 Though he’s a perfect 3-0 when he steps inside the Octagon in his home country, including the UFC 142 win over Terry Etim that produced one of the most iconic knockouts in MMA history, Barboza had designs on fighting on a different “hometown card” a few months down the road.
> Watch Edson Barboza vs. Terry Etim on UFC FIGHT PASS

“I asked my manager to try to put me to fight in New Jersey because my whole team is from there,” the Ricardo Almeida BJJ team member says. “I do my training camp there and I fought in New Jersey four times and I won four times.”

The UFC will return to “The Garden State” in April with an event on FOX headlined by middleweights Lyoto Machida and Luke Rockhold. Though the card is not yet completed, there is a serious East Coast influence to the lineup with Serra-Longo Fight Team reps Eddie Gordon, Gian Villante and Aljamain Sterling shipping in from New York to join Jersey natives Jim Miller, Nick Catone and George Sullivan on the April 18 fight card at the Prudential Center in Newark.

Barboza’s hope to be a part of “The Battle in Brick City” goes beyond in-state winning streaks and mild superstitions though.

“My wife Bruna works with me, so she always goes to my fights,” Barboza, who counts wins over Green, Evan Dunham, Danny Castillo and Pearson among his 15 career victories, explains. “She helps me with food, she is my PR, she helps me with interviews. The only fight she didn’t go to was the last one against Green because she was nine months pregnant and she could not get on the airplane.

“They won’t go to my fight again because my son is too small. He is only two months old and I cannot bring him to my fight yet. Having a newborn baby in my house, it would be a lot easier if I would fight in New Jersey. But my manager talked to Joe Silva and the UFC wanted me to fight in Brazil.

“I am a fighter. I will fight wherever they want.”

This weekend, that means Ginasio Gigantiinho (“Little Giant” in Portuguese), the sixth largest arena in Brazil and the home of the UFC’s inaugural event in the city of Porto Alegre. It also means sharing the cage with a returning fighter eager to make up for lost time. 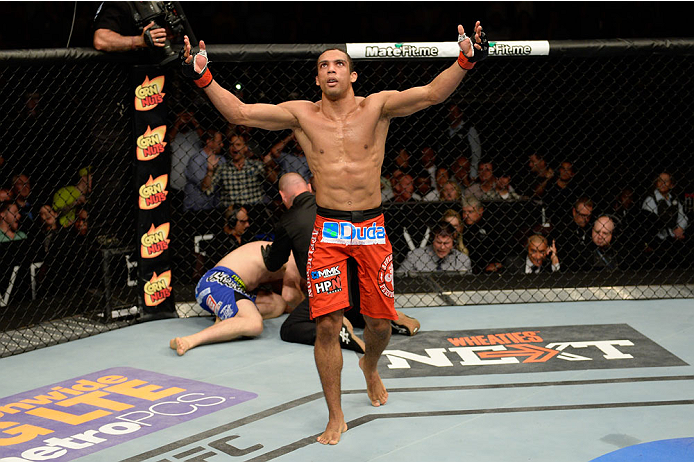 Currently ranked No. 12 in the lightweight division, Johnson broke into the Top 10 last March following his win over former teammate Melvin Guillard in London. After dispatching Joe Lauzon and Gleison Tibau, beating “The Young Assassin” ran his winning streak to three and put him on the brink of contention. Now the Team Blackzilians standout is keen on reclaiming a place in the Top 10 and reminding everyone that he’s a threat in the weight class. After being sat down for the final nine months of 2014, Johnson is being thrown right back into the deep end of the division, a move that surprised some observers, but not the man he’ll face on Saturday.

“No, not at all,” Barboza says when asked if the matchup with the returning “Menace” came as a surprise. “He is a great fighter – one of the best in my division – so let’s do it.”

Stylistically, Johnson is similar to Green – both have strong boxing backgrounds and solid wrestling skills tucked into their back pocket, ready to be accessed if the situation calls for it.

With the relatively quick turnaround between fights and facing an opponent with a comparable base to the last man he beat, some fighters might be tempted to borrow from their previous training camp and back off the gas a little, but not Barboza.

This one did come with a little something extra, though.

“After watching my wife giving birth and seeing my first child for the first time, I can say that I have more power than ever. I would do anything for them.”

Sunday night, that means picking up a third consecutive victory before rushing home for some quality family time.