Barboza Expects Another Fight Of The Night With Felder

The first time that Edson Barboza and Paul Felder fought back in 2015, the two put together a great performance. Barboza believes it will be more of the same when they meet again at UFC 242.
By Thomas Gerbasi, on Twitter: @TGerbasi • Sep. 3, 2019

“I always try to look at my opponent’s face because most of the guys try to not show me his pain, but everybody shows me,” he smiles. “‘Okay, I got you.’ I know.”

Most of the time when that look shows up, the end of the fight follows, with the Brazilian banger going back home with another victory. Sometimes it doesn’t, though, and sometimes, guys like the man Barboza will be meeting for a second time this Saturday night in Abu Dhabi - Paul Felder – make it through all 15 minutes with the punishing striker.

And that’s why the UFC 242 co-main event is a stark reminder that while some run away from danger, other run to it, and Barboza is more than willing to get that look out of Felder again as he seeks to repeat his 2015 Fight of the Night decision win over “The Irish Dragon.”

“My first fight against Paul was Fight of the Night and I remember the fight was a big war,” said Barboza, who handed Felder his first pro loss that night in Chicago. “He’s a nice guy, a very competitive guy, he’s one of the best in the world, and I think this fight will be no different. I’m ready for war, like always, and why not, one more Fight of the Night. I’m very excited and ready for this.”

Barboza is clearly not tired of picking up extra checks on fight night, and he’s got plenty of them, with two of the bonuses coming for Performance of the Night and seven for Fight of the Night. And though he enters this rematch with a 1-3 slate in his last four trips to the Octagon, the 33-year-old feels better than ever and is amped up to make a statement to his peers at 155 pounds.

“This training camp has been perfect,” said Barboza. “I feel great. I trained a lot and the most important thing is that I had a safe camp – no injuries and I’m a hundred percent for this fight. It’s a hundred percent going to be my best fight in the UFC.”

That’s a high bar to set considering what he’s done since his Octagon debut in November 2010. That night in Detroit against Mike Lullo, Barboza gave the lightweight division a taste of things to come as he stopped his opponent with leg kicks. By the time he faced Felder, he was 9-3 in the UFC with five knockouts and five bonuses and fully established as a contender. Felder was the young gun, 10-0 with just two UFC wins.

The experience edge showed as Barboza pounded out a close, but unanimous, decision. Soon after, the two were training together, and while they are very familiar with each other, Barboza believes none of that will matter in Abu Dhabi. 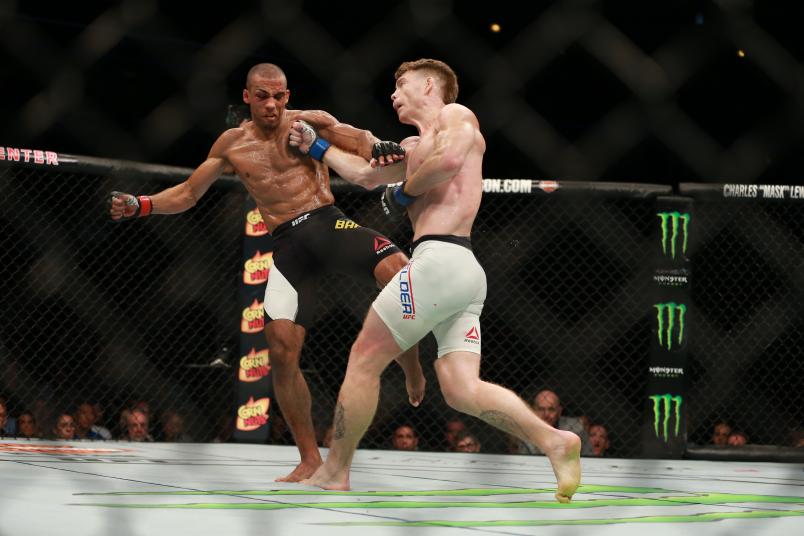 Edson Barboza punches Paul Felder in their lightweight bout during the UFC event at the United Center on July 25, 2015 in Chicago, Illinois. (Photo by Rey Del Rio/Zuffa LLC via Getty Images)

“He helped me a lot,” Barboza said of Felder. “We spent a lot of time together, but in Brazil, we say training is training, a fight is afight. It’s completely different. I know that and he knows that. He’s a different guy, I’m a different guy too and that makes me very excited because I know it’s gonna be a great fight.”

“I’m so blessed because I love it,” he said. “I love every moment. But I feel I’m not done yet. I feel stronger, I’m getting better and better in every single fight, and the most important thing is that I’m very motivated. I know I have a long way to go in the UFC.”

In the meantime, he’ll always be hoping to see “that look.” And when he gets it, well, you know the rest.

“I’m the most dangerous striker in the UFC, a hundred percent,” Barboza said. “Everybody knows that if you stand in front of me, you blink and it’s over.”

Don’t miss a second of one of UFC’s biggest events of the year. UFC 242: Khabib vs Poirier early prelims start at 10am ET on Fight Pass. Prelims, headlined by flyweights Joanne Calderwood and Andrea Lee start at 12pm ET on FX.