Edson Barboza - Back in Rio, Back on Business

"Fighting is like a chess game; you need to think about every step you will do." - Edson Barboza 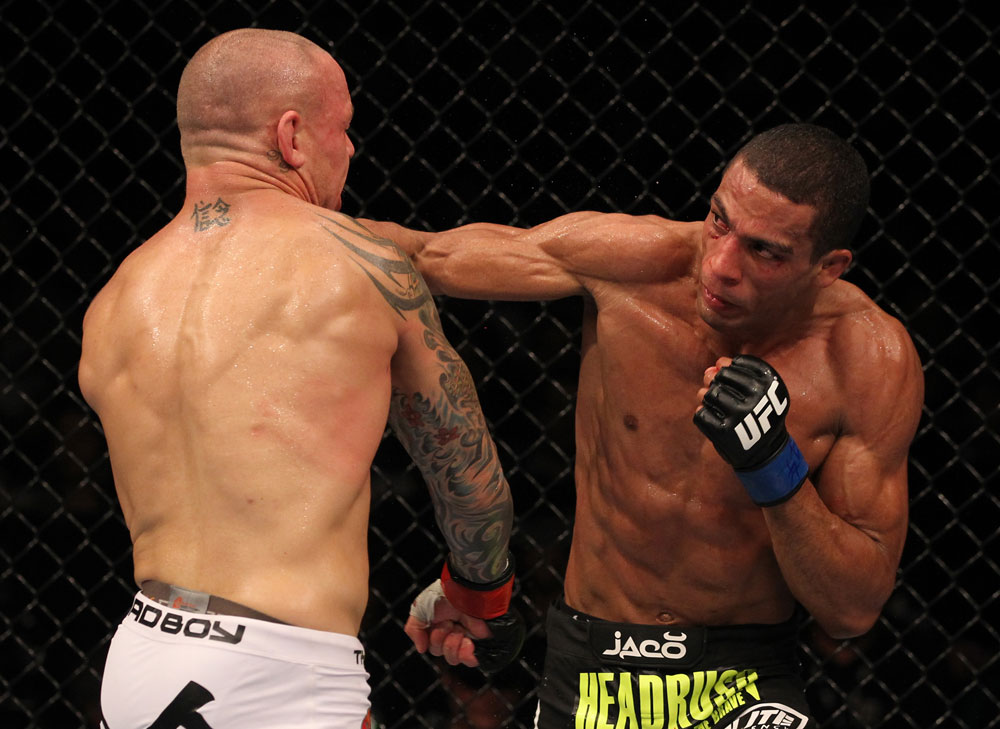 Despite Edson Barboza’s undeniable talent and drive, when he left his native Brazil in 2009 to chase after mixed martial arts glory in the United States, it was a roll of the dice. There are a lot of skilled athletes who, for whatever reason, just can’t get the right break or perform when the pressure’s at its highest.

Barboza wasn’t one of those who missed the mark. Instead, after going 6-0 to start his MMA career, he got called to the UFC, and in two fights he became one of the lightweight division’s brightest rising stars.

Then he went home to Rio de Janeiro last August, his first trip back.

“It was at a point that I couldn't even imagine,” said Barboza. “Many fans came to me asking to take some pictures and asking for autographs. And at some point I thought to myself "Am I really in Brazil?" I couldn't imagine how strong MMA was in Brazil. It was awesome.”

That was just the week of his UFC 134 bout against England’s Ross Pearson. Then came the night of the fight at HSBC Arena, and when the returning hero left his locker room and began his walk to the Octagon, everything – the noise, the reaction, the energy - got turned up to 11.

“It was different from the other fights, because I could hear a lot of fans cheering me on,” said Barboza of fight night in Rio. “They called my name, and there was all this energy involved in the fight. It was unbelievable. But you know, when the cage door is closed I get focused on my game and on the fight. And it becomes the same thing as everywhere - just the referee, my opponent and I.”

That ability to put all the expectations and pressure aside for 15 minutes allowed Barboza to notch his third consecutive victory (and second consecutive Fight of the Night award) as he pounded out a close split decision win over Pearson. To move to 9-0 and do it in front of a hometown crowd was a great feat; yet as a perfectionist, the 25-year old sees what did and didn’t go right on fight night.

“Man, I have to be a lot better than that,” he said. “I did all things that I was training to do against Pearson, and my strategy was to keep my distance because I was taller than him. But I know I'm able to do better than I did. Every fight I learn more things, and I can see what I did right and my mistakes. I'm training really hard to improve to be better.”

After the bout and some well-deserved celebrating with family and friends, Barboza returned to South Florida and the Armory Gym, where he kept the work rate high as he waited for his next assignment. That assignment? Another trip to Rio to face another British up and comer, this time it’s Terry Etim on this Saturday’s UFC 142 card.

“Etim is a good fighter,” said Barboza. “He is taller, he has a great game on the ground, and I know that.”

To enhance that attack this weekend, Barboza is not only working with his usual crew, which includes Luíz Cane, Vagner Rocha, Pablo Popovitch, Marlon Moraes, and Raphael Chaves, but he is sharpening his ground game with Eduardo Guedes and going back to his Muay Thai roots with his original coach Anderson Franca. Call it the battle before the war.

“Every fight is different,” he said. “Fighting is like a chess game; you need to think about every step you will do. I know Terry is a great fighter, but I'm focused on my own game.”

He’s also focused on not getting caught up in being back home again. To be at his best, this has to be a business trip, not a vacation, so when asked if it will be easier for him fighting at home the second time around, he’s very candid when he says, “It's never easy to be fighting in Brazil. There are a lot of fans cheering you on, and the Brazilian fighters want to do their best there. Every fight I train harder and I want to do my best. The fight is a challenge and it's never easy.”

Yet as the fights get harder, the rewards are greater. To most MMA fans, Saturday’s main card bout may be the ticket for the winner to move from prospect to contender. Barboza isn’t about to fall into that prognostication trap though.

“I'm not worried about that right now,” he said. “I just want to do my best inside the Octagon and do my job step by step.”

“Thank God last year was amazing for me,” he said. “My goal for 2012 is fight as much as I can, and I want to stay fighting against the best fighters in the world.”