In a hard sport, Frankie Edgar is a hard man, and he’s got the six hours, 27 minutes and 51 seconds of total Octagon time to prove it. But when the gloves are off, the pride of Toms River, New Jersey is one of the classiest gents in the game, so it’s no surprise that he refused to put on a Max Holloway t-shirt and cheer for the Hawaiian when he faced Jose Aldo for the UFC featherweight title in June.

“I was watching very closely, but I didn’t want to pick a side,” he said. “I had to let fate take that one, and the better guy is gonna win. That’s what happened that night, and luckily it was the guy that helped me get my title shot.”

On Dec. 2 in Detroit, Edgar will face Holloway for 145-pound crown in the main event of UFC 218. It’s a title shot that probably wouldn’t be happening if Aldo won at UFC 212, simply because the Brazilian star already held a pair of wins over “The Answer.”

“I kinda figured that if Aldo won, that would probably hinder the plans of me getting a title shot right away,” Edgar said. 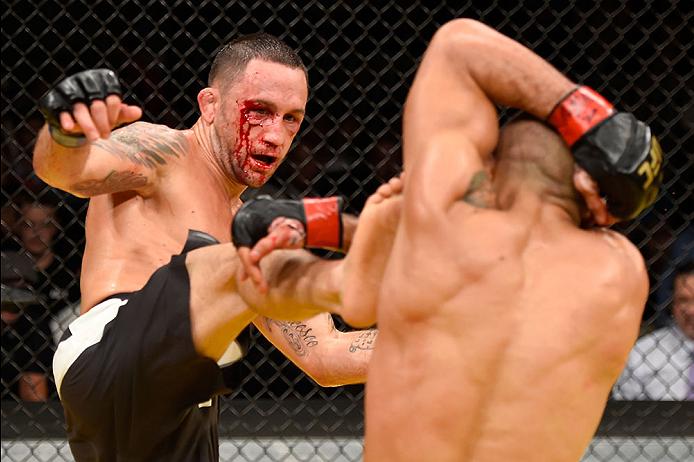 “We just fought not too long ago and they don’t like to run fights like that back so quickly. And I understand that, but with Holloway winning, it made perfect sense.”

It does, and it’s also a well-deserved opportunity for the former lightweight champion, who will take his third crack at featherweight gold. That’s a rarity for any fighter, but Edgar isn’t just any fighter. In nine bouts at 145 pounds, Edgar has won seven, with his only losses coming to Aldo, and since that last defeat at UFC 200, he has turned back Jeremy Stephens and Yair Rodriguez. And while the Stephens win was impressive, it was nothing like his May stoppage of Rodriguez, the highly-touted Mexican contender who many believe was poised to beat Edgar and move into the title picture.

Edgar had other ideas.

“You don’t intend to come in with a chip on your shoulder and I try not to pay attention to that stuff you hear in the background, but you can’t help but hear it, and your subconscious gets geared up to have that chip on your shoulder and I think that’s what happened,” he said. “Whenever I knew I could take advantage of it, I definitely made sure I put a stamp on that one.”

Putting a stamp on it is putting it lightly, as Edgar dominated the rising star until halting him in two rounds. As many great performances as Edgar put together over the years, this had to be in the top five.

"The Answer" @FrankieEdgar caps off a -fight winning streak & earns another crack at the featherweight belt w/ THIS KO of the Week pic.twitter.com/RnooixZhRR
— UFC (@ufc) May 3, 2017

“I felt like everything went perfect,” he said. “I don’t think I got hit by any punches, I had to work a little to get the takedowns, but once I got them, I knew that once I got on top, I was gonna do some damage. I just wanted to pour it on and I wanted to get him out of there as quickly as possible.”

And after the stars aligned a month later, the 35-year-old Edgar got his title shot and a meeting with Mr. Holloway in the Motor City.

“He’s a stud,” Edgar said of the 25-year-old champion. “Just look at his record – it speaks volumes about what kind of fighter he is. And he’s so young, so he’s still coming into his own. It’s going to be a tall mountain to climb, but this is the spot I’m always in, it’s a spot that I relish and I look forward to proving people wrong again.”

A win on Dec. 2 would be the cap on a career in which he has already established hall of fame credentials, but to Edgar, it would mean even more than just getting another belt for his collection.

“It just means that my stubbornness was for something,” he said. “The fact that I haven’t taken my sight off that title and being number one, it will all be worth it when I get the title. I always feel like I put a hundred percent into everything I do and I do everything the right way, but I feel that if I don’t get this title, I’ll have some regret, and I don’t want to live with that.”