Edgar's Lone Goal: Get the Belt Back

"Anytime you taste defeat you want a chance at redemption." - Frankie Edgar 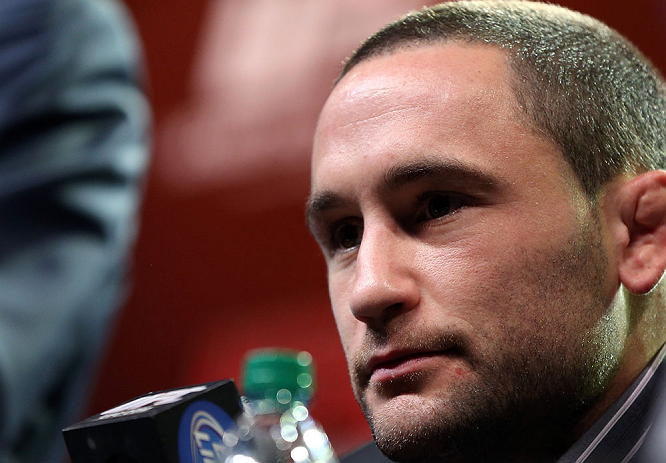 It’s Father’s Day and Frankie “The Answer” Edgar (14-2-1) sits with his back against a padded wall on the third floor of the Renzo Gracie Academy in New York City. His shirt is drenched and stuck to his body while sweat drips down onto his face from his head.

The thing is, the guy isn’t even working out. Well, not really anyway. He’s being interviewed by a crew from Gaspari Nutrition, Edgar’s supplements sponsor, who are making a series about Frankie’s training camp for Henderson vs Edgar II at UFC 150 on Saturday in Denver, Colorado.

The series, called “155 Reasons,” tells the story of Edgar’s journey from high school wrestling standout to UFC lightweight champion and his climb back to the belt through interviews with his teammates, coaches, family members and journalists.

While most fathers on this day are out for breakfast at the local IHOP with the kids, Edgar’s spent the morning doing shadow boxing, flying knees and hitting pads for the cameras with his manager/training partner Ali Abdelaziz.

It is a complete about face from the first time I met Frankie back when I made him my fight analyst on Fox Fight Game during the summer of 2009. Back then, Edgar had an aversion to cameras. They made him uncomfortable and this was never more evident than in the lead-up to his lone loss at the time -- suffered at the hands of Gray “The Bully” Maynard in their first fight at UFC Fight Night in April 2008 – as a crew from the MTV television show “Made” followed him throughout his training camp for the series.

Edgar didn’t blame “Made” for the loss, but he became superstitious about cameras during training camp. I remember his father Frank Annese and wife Renee would always give me a raised eyebrow whenever I showed up with my camera crew in tow at Ricardo Almeida’s academy in Hamilton, NJ.

Two years as the UFC champion however, cured him of that aversion -- and between UF C Primetime, UFC Countdown and more and more media covering MMA -- these days it’s rarer when there are no cameras following the 155 pound phenom around than when they are.

“I’m used to it,” he says of the constant presence of strange men and women lurking about carrying video and audio equipment. Like the way he got used to being the champion.

“When you taste being the champion, you like to be the one defending your belt, not trying to get it. When you have people calling you the champ, it has a nice ring to it.”

Indeed it does. Coupled with what some called a controversial decision loss against Benson Henderson at UFC 144 last February in Japan, and the fact that even UFC president Dana White thought he won the fight -- Edgar shouted to anyone who would listen that he wanted an immediate rematch.

“There’s nothing personal for me, it’s the nature of competition,” says Edgar. “He took the belt from me and I want it back, that’s it.”

So what is Edgar going to do differently this time around?

Frankie Edgar is no stranger to getting better. With each fight “The Answer” improves some part of his game. Perhaps the UFC did him a favor when they gave him Tyson Griffin for his debut fight. Fighting someone so good in his first UFC bout set the bar very high for the Toms River, NJ native.

But it was a fight against a former champion that set Edgar on the path he has blazed in his UFC career to date.

“I think it was the Sean Sherk fight. He was a former champion and I beat him. I think I had a good career progression,” he said. “I fought Spencer Fisher then I fought Hermes Franca who was a title contender, then a former champ in Sean Sherk. Every fight was a step up in competition and it made me believe I could be a champion.”

And while preparing for yet another rematch (he’s fought three in a row: BJ Penn, Gray Maynard and now Benson Henderson) – the elephant in the room is the 145 pound discussion that Edgar knows he will have to address sooner or later.

“Just because you go down a weight class doesn’t mean you’re going to be successful,” he says. “There are a lot of variables. Guys are faster, a little more athletic. Just because you lose the weight doesn’t mean you’re going to dominate. The media wants to talk about it. The fans want to talk about it. Even I do it -- play fantasy matchmaker. I want to see Georges (St-Pierre) fight Anderson (Silva) or Anderson fight (Jon) Jones. Can I go ‘45? Yeah I can make the weight. In the future am I going to go down? Yeah, I challenged myself at ‘55 and I’ll probably challenge myself at ‘45.”

For boxing coach Mark Henry, the move down to 145 pounds for his protégé is inevitable, but Henry sees it as more of a necessary evil of the game than a limitation in Edgar’s fight skills.

“Frankie walks at 155,” says Henry. “Ben Henderson just had a jiu-jitsu tournament at 180 and I bet he cut a couple pounds for that too. Jiu-Jitsu he’s 180 but when you’re throwing hands he’s 155? I’d like to see Ben Henderson fight 185 against Anderson Silva because that’s what Frankie’s doing.  It’s no knock on anybody. It’s just what everybody’s doing in MMA and it just proves to me how unique a fighter Frankie is and how to me he’s the pound-for-pound best fighter in the world.”

But right now Henderson has the belt and before Edgar vacates the division he was on top of for two years and three successful title defenses (one was a draw but he retained the belt nonetheless), he’s got to figure out the Korean-American wunderkind.

“Ben’s tough, he’s hard to train for, a little unorthodox, a great athlete and he’s a big ‘55 pounder,” says Edgar. “He’s got a lot of skill and that’s why the fight was so tough the first time. Leading up to this one I have to make some adjustments, no doubt.”

Adjustments and improvements are what drives Edgar’s diehard attitude toward a sport he’s now seven years into, and why he’s constantly training.

On Saturday, Edgar will test his theory that he’s gotten better with every fight. Win or lose however, Frankie will be forced to make a decision about going down to 145, but for now he’s only got one thing on his mind.

“Anytime you taste defeat you want a chance at redemption.”