It was all fun and games until it started raining in Medellin, Colombia and the car started rolling backwards down the mountain.

Kamaru Usman can laugh about it now, but in early October, it was no laughing matter as the UFC welterweight champion traveled up that mountain to visit the kids training at Boxeo Para La Vida with former UFC lightweight champ Frankie Edgar and Edgar’s wife, Renee.

“It was the most unsafe thing I've ever seen,” said Usman of the harrowing trip, which started off as a spur of the moment visit during some downtime while the two UFC stars were in Colombia.

“One of my partners in my nutrition company, Iron Army, has ties to Colombia and he's been over there several times and he got hooked up with this boxing club called Boxeo Para La Vida,” said Edgar. “He started helping these kids out, my Iron Army started sponsoring them, and he said let's set up a day to go up there.”

Simple enough. The Edgars then invited Usman, and “The Nigerian Nightmare” was all-in.

“They said, ‘We're going to go and see the boxing club. They don't have much food and things like that, so we're gonna buy them groceries,’ That's something right up my alley. I love working with kids, in general, and working with families and helping out any way that I can. I absolutely love it.”

Then the drive started up a one-lane mountain. 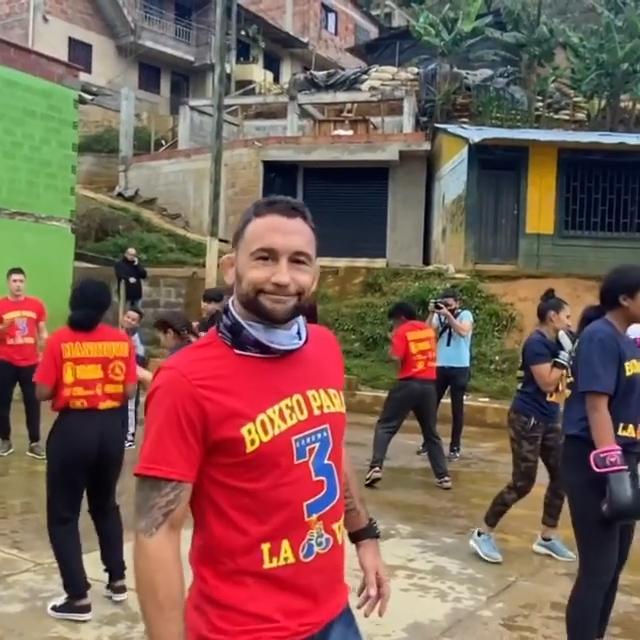 “This thing is steep,” Usman said. “It's one lane and it's winding completely around the mountain to get up. It was one of the craziest things I've ever witnessed, getting up this thing. If there's a car coming down the mountain, you have to stop on the side and let the car go by so you can make your way up the mountain. And there were buses going up this mountain. I couldn't believe this. Not to mention the motorcycles whizzing by. And then it starts to rain while we're making our way up the mountain.”

That’s when things got a little dicey.

“We hit a point where it started raining heavily and we're trying to make it up the mountain and our car is sliding backwards and the car gets quiet,” recalled Usman. “Frankie is dead silent. His wife is like, ‘Okay, let's try it.’”

Edgar wasn’t so sure.

“You know what, if we're still sliding and it's still raining like this, let's just call it,” he said.

“I agree with you,” Usman added. “Let's not die on this mission.”

Renee Edgar wasn’t having it. She knew these kids were waiting to see them.

Usman looked at “The Answer.” It was two of the baddest dudes in the world speaking volumes in silence and wanting to turn back. 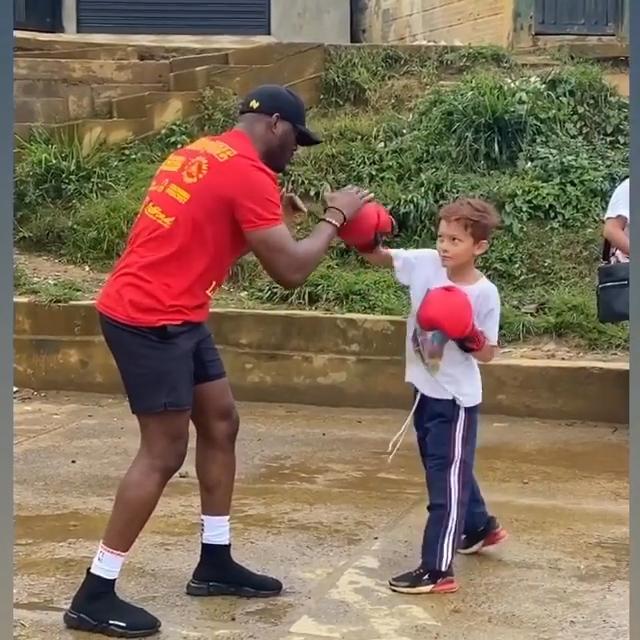 “Me and him could read each other's eyes,” laughs Usman. “We're saying, ‘We have kids, we don't want to go rolling off this mountain and die.’ We're thinking the same thing but we're not speaking, we're just looking at each other.”

“It was nerve-wracking going up that mountain,” laughs Edgar. “I give props to the driver that drove us. He was from Colombia, a bi-lingual guy and this dude had balls of steel. He wasn't scared and I was scared as Hell.”

Palms sweaty, Edgar said to his bride, “Let's at least wait for the rain.”

She wanted to keep going. They did.

“We got up there,” laughed Edgar, who breathed a sigh of relief with Usman until something struck them at the same time.

Watch Blaydes vs Lewis Saturday With Your ESPN+ Subscription

“How are we gonna get down this mountain?”

They made it, safe and sound. And in between those harrowing rides, Usman and Edgar had an experience they’ll never forget at Boxeo Para La Vida in Manrique La Honda.

Launched by Diego Beltran and Joan Vasquez, Edgar said the club was created “to keep young children out of gangs, drugs and prostitution. And anytime we get to give back to kids, especially, through martial arts is a no-brainer to me.”

But while the impression of a boxing club in the United States produces one image, the reality in Medellin is quite different. 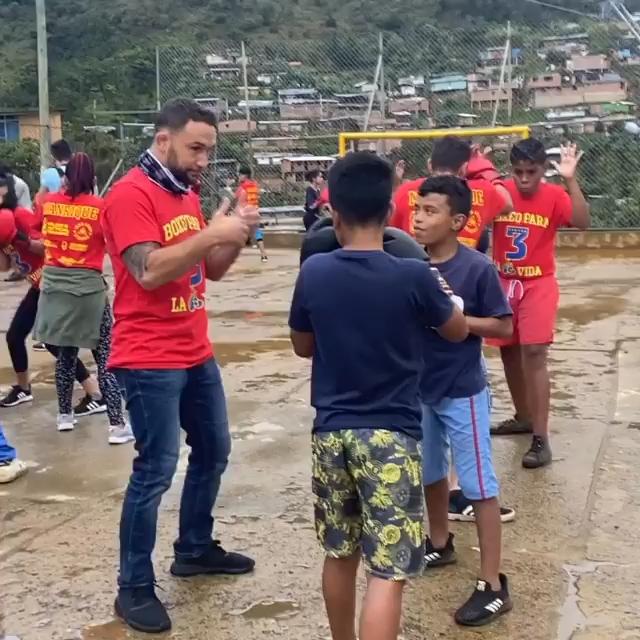 “They're literally working in an open room with concrete floors, open windows and it was so crowded that we had to go on a makeshift basketball court to fit everybody,” said Edgar. “It's very humbling.”

“The gym is as big as my dining room,” adds Usman. “It's a small gym, they've got a bag up and a few gloves sitting up there. There's no running water anywhere there, and a lot of these homes up the side of the mountains, there's no water, no plumbing system, none of that. I was getting a flashback to how I grew up. I'm seeing all of this and instantly, I can appreciate all of it.”

It’s in gyms like this that fighters are made. No one knows this better than Usman and Edgar, and while there were plenty of kids just there to do something constructive with themselves, there were also those who had that fire in their belly to make this their way out.

“It was extremely humbling because I couldn't help but have those thoughts while I was there watching the kids and teaching them,” said Usman. “As a kid, you don't necessarily know what you're in and what's going on. You're just in a certain circumstance. And I'm looking at the kids and I'm already thinking, this kid's naturally gifted, this kid's gonna naturally pick it up, he's gonna do amazing things with this. And that was the case. If these kids stay with this, if they continue to learn and train, some of them can develop so rapidly to where they could become superstars of this sport. I saw myself in that position and I see myself now. Nowadays, we complain that there's not enough milk in our Starbucks coffee and we're on the side of the mountain, and some of them don't even have a roof on their house. It puts a lot of things in perspective that you tend to forget when you're at a certain place in life.”

“It's very humbling seeing these kids in such poor circumstances, but these kids don't know any different,” adds Edgar. “They're happy to be there, happy to be working out, and it was a very cool experience. It's super humbling and it really brings things into perspective.” 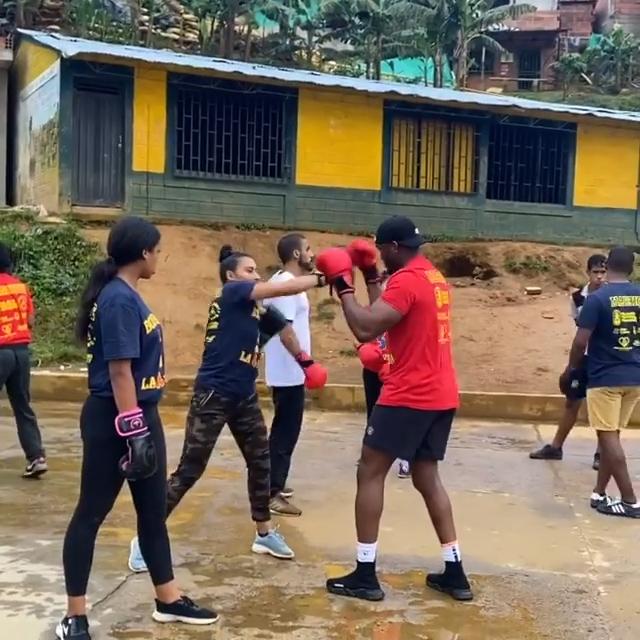 Whether they’re currently wearing belts are not, Usman and Edgar are champions, and that was evident by the way they were received in Medellin. You can also add in the toughest member of the crew, Renee Edgar, who wasn’t afraid of the mountain that took them to get there and who had groceries to give to 28 families that day. It was something those kids and families will never forget, but Usman and Edgar feel just as lucky to have been there.

“I quickly realized that this was gonna be more meaningful than I had bargained for,” said Usman. “I love to work with kids and I love teaching, and seeing them come from humble beginnings, it meant the world to me to see all these kids from around that neighborhood on the side of that mountain, that this is just what they wanted to do - come in and work out and continue to learn and grow. Some of them didn't know who we were - they just came in to train for the day. And the ones that did know who we were wanted pictures and we got a chance to hang out with them and talk with them. It was one of the most memorable and humbling experiences I've had in the last couple years.”

“The kids were showing out, trying to do their best to perform in front of us,” said Edgar. “It was very cool. My wife was talking with the little girls and it was a life changing experience, to be honest. Of course, I want to see these kids realize their dreams and get out of these poor circumstances and live a good life, but I really was surprised at how much it really affected me. It probably affected me as much as it affected those kids.”