"There’s always a way of staying ahead of yourself and staying ahead of
this evolving MMA game. That’s motivating in itself, and there’s no way I
want to lose this third time out." - Frankie Edgar 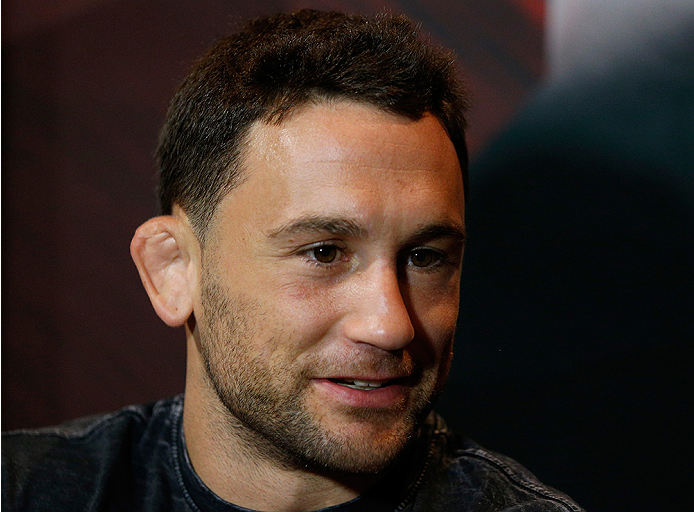 The topic at the center of this Sunday’s third fight between Frankie Edgar and BJ Penn has been a persistent one since it was announced. Will Penn, the former UFC lightweight and welterweight champion, who fought his last fight in December of 2012 at 168 pounds, make weight for his first featherweight bout?

All signs point to yes, but even before seeing “The Prodigy” show up downright svelte for fight week in Las Vegas, his opponent wasn’t too concerned.

“I’m not,” said Edgar. “I don’t think he’s got a big frame, and when we filmed the show (The Ultimate Fighter) it seemed like he was in striking distance, and he’s working with (Mike) Dolce, so I’m not really concerned with it. I’m just worrying about me.”

And if you know Edgar, you’ll realize that if Penn showed up at 185 pounds instead of 145, the New Jersey native would likely strap on the gloves and scrap anyway.

“I probably would, I’ll be honest,” he said. “But maybe we’ll make him work out for that hour and get a little off. (Laughs)”

That’s Frankie Edgar, who probably wouldn’t even do that. It’s just the way he’s made. He’s a fighter, and as far as all the other drama that comes along with the fight game goes, he’s not interested. It’s the same way he’s been his entire UFC career, making him not just one of the sport’s top competitors, but one of its best people as well.

“I’m not really a big ego kind of guy,” he said. “I just treat everybody how I would like to be treated, no matter what. Even on the show, I didn’t think I was any better than the guys there, or the guys behind the camera. I don’t think I’m better than anybody. Everybody’s got their own life, and that’s about it.”

It may come from his blue collar background, one where he used to have to juggle his fight career with a full-time gig as a plumber. Sure, he was a great athlete, but he wasn’t a coddled one. And that makes a big difference.

“I had to juggle two things,” he recalls. “I had to work and do some degrading things at times, like busting up urinals and digging holes, and then had to go to the gym right after. It definitely puts things in perspective.”

Consequently, you won’t see Edgar with an entourage, won’t have to go through five people to get one interview, or hear him engaged in any trash talk wars. That’s just not his style. Jeez, even Penn, who always enjoyed a little verbal sparring over the years, won’t say a cross word about the man who already holds two wins over him.

So with no bad blood between the two former lightweight champs, and Edgar already 2-0 against the Hawaiian, you had to wonder if the Toms River product was surprised when he got the call to face Penn a third time.

“At first I was,” he said. “I think at the time, he was supposed to be retired, or at least inactive, and not at 145. And when they first offered it to me, I thought it could possibly be at ’55, so I didn’t really know what to expect. But I’m a gamer. I’m always willing to do what is asked of me. I keep it simple, and when you do that, you don’t let things get out of hand.”

And it is a high-profile fight against one of the sport’s superstars on the biggest UFC weekend of the year. All enticing prospects indeed, but after being out of action since his July 2013 win over Charles Oliveira, Edgar is just happy to be back in action.

“A hundred percent,” he said. “I’m a little ornery (Laughs), and it’s funny, I always get to this point where I’m sick of training. I’m ready to fight. But a week after the fight I’ll be twiddling my thumbs saying, ‘all right, let’s get back in the gym.’”

He’s seen enough of the gym over the last year, and when he wasn’t working on his game and staying sharp he was spending time with his family, which got a new addition when he and his wife Renee welcomed a daughter in June.

“I really didn’t take much time off,” said Edgar of life after his Fight of the Night win over Oliveira at UFC 162. “I probably didn’t take off more than a week at a time at any given point in this year. I went on vacation with my wife and my family, and even then I was running on the beach. I can’t really sit too idle; I’m just not that guy. So I was in the gym and working constantly to get better. I didn’t go there and beat myself up the whole year, but I was definitely in there trying to improve my skills, and helping my teammates get ready helps also.”

Edgar also faced off with Penn without gloves on, as the two coached on season 19 of The Ultimate Fighter. It was an opportunity for Edgar to introduce himself to the public in a way they hadn’t seen before, and before he takes care of his business on Sunday, both TUF 19 final bouts will be contested by fighters Edgar coached on the show.

“It’s a testament to how we do things, and I don’t want to take all the credit because I brought my coaching staff – the guys I work with on a daily basis – there with me and I think it has a lot to do with the chemistry that we have, and I’m just following the lead of the guys before me,” he said. “I notice a lot of my coaching techniques are what I get from the guys that coached me. So it’s definitely nice to know that we’re doing the right thing. And if we can do it with myself and then with guys we were only with for six weeks, then we’re on the right track.”

And probably about to get a lot of calls about training with him and his team in Jersey. It’s not for everyone though.

“It’s unique what we have here in Jersey,” he said. “We’re not really a one-stop shop. You’ve got to really want to do this because you’re got to travel, you’ve got to adjust your schedule, and it’s not like you go to one gym and everything’s there; we kinda move around a little bit, so it’s not the easiest thing for guys to do.”

Jersey Turnpike and Garden State Parkway traffic in the summer is no joke either, and Edgar agrees, but for now there is only Penn, who the 32-year-old defeated twice in 2010. And while the first fight was close, the second one was a clinic by Edgar. So how does he top that fight this weekend?

“I don’t think it’s about topping the last BJ fight, it’s just topping my last fight, period, and just trying to be a better fighter,” he said. “It will be over four years since we fought, so I just want to show the world that I’ve been doing things these past four years. I’m not the same fighter. I don’t think I’m the same fighter I was a year ago or even three months ago. There’s always a way of staying ahead of yourself and staying ahead of this evolving MMA game. That’s motivating in itself, and there’s no way I want to lose this third time out.”