“It’s daunting sometimes thinking about it, but it’s also motivating because this is the reason why I fight, I think."
By Thomas Gerbasi • May. 24, 2019

It feels like a long time since we last saw Frankie Edgar in the Octagon. It feels even longer for “The Answer.”

“You have no idea,” he laughs. “I don’t want to say I’ve been depressed, but maybe some patches of depression. Thank God I’ve got a family to fall back on. But it’s been rough. I got through it and I’m not trying to complain too much, but it makes this really fresh and exciting, that’s for sure.”

“This” is the end of his time on the sidelines, a UFC 240 main event for the featherweight title against Max Holloway on July 27. The trip to Edmonton for the New Jersey native will mark his first business trip since he beat Cub Swanson in their April 2018 rematch, and getting his long-awaited crack at “Blessed” and the 145-pound title is a bonus he’s not taking for granted.

“Of course that’s what I put out there because that’s what I wanted and you gotta put it out there if you want it,” Edgar said of the title shot. “But I honestly didn’t know it was gonna happen. Even when I heard rumors of me getting it and my manager Ali (Abdelaziz) was saying that it looked good that we’re gonna get it, I still didn’t want to believe it because I didn’t want to get disappointed if it didn’t go my way. Maybe that’s not the most positive way to think about it, but sometimes it’s better to expect the worst and hope for the best.”

That’s as Jersey an attitude as you can get. Edgar laughs.

“If I expect my plane to be late or there to be traffic all the time, when it happens, I’m not too bad,” he said. “And when it doesn’t happen, I’ll be happy. That’s my approach.”

But after several stops, starts, a key loss and injury, everything is turning in the right direction for the 37-year-old, who first saw a meeting with Holloway scrapped due to injury in November 2017. Four months later, the rescheduled bout hit the skids when it was Holloway now pulling out due to injury. Edgar opted to stay on the UFC 222 card but lost to Brian Ortega. Ortega wound up getting Edgar’s title shot, but the former lightweight champ rebounded with the win over Swanson and he was looking to add another victory to his resume last November before another injury took him out of his matchup with Chan Sung Jung. 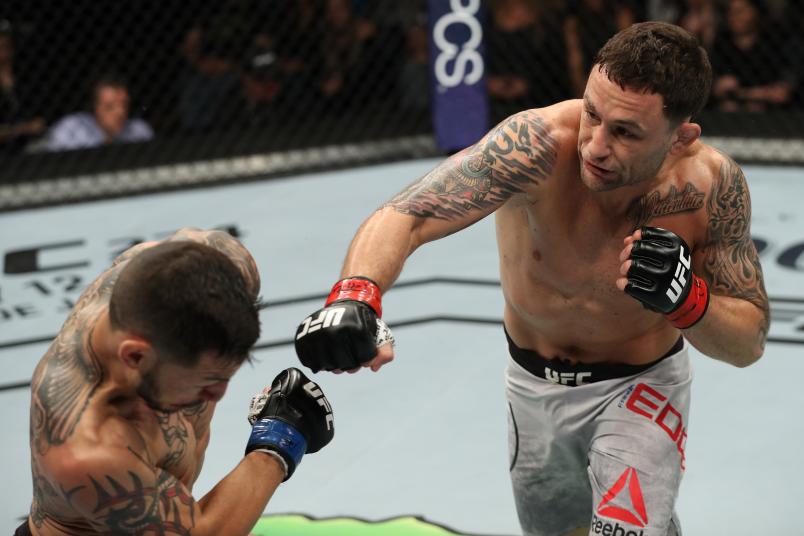 Since then, it’s been a painful waiting game, and if you know what a gym rat Edgar is, waiting isn’t something he takes well to. But he does admit that letting his body rest and heal was ultimately a good thing.

“I missed sparring, I missed competing with the guys and hanging out with them,” he said. “It was refreshing having this time away and not being able to spar because I’m always getting ready for fights or helping someone, and sparring gets tough because I’m sparring some pretty good guys. So having this time off made me miss it a lot, and I think it was a little bit of a wakeup call to realize that this can go away, so I need to still have fun while we’re doing this.”

And there’s nothing more fun for Edgar than getting another chance to test himself against another elite fighter…and to do so against the odds. So while Holloway is the favorite, Edgar’s focus remains unchanged.

“I’ve been training for this guy for quite a long time and I feel like every time I watch him fight, he’s just getting better,” Edgar said of Holloway. “It’s daunting sometimes thinking about it, but it’s also motivating because this is the reason why I fight, I think. You know I’m a ‘Rocky’ guy, so going in there, not even supposed to be there, not supposed to win and finding a way is why I think I fight. So this is the best position for me.”

It’s one he embraces.

“I always believe in myself,” he said. “I’m never one to scream and shout that I’m gonna win, what round I’m gonna win in or anything like that. I kinda keep it to myself, but I always do believe in myself. You can’t not hear what everyone else is hearing, though, so I think the fact that everyone else is saying I shouldn’t be in there, I shouldn’t have got a title shot, whatever they’re saying – it doesn’t really matter to me. I just love proving people wrong, and this is the perfect storm for that to happen.”

The excitement in Edgar’s voice is evident. This is the stuff he lives for, and despite already having compiled a Hall of Fame-worthy resume, he’s still got something left in the basement. Does that ever come as a surprise to those around him?

“I think the people that know me,” he laughs, “they’re not surprised one bit.”