Edgar looks homeward to put stinging loss behind him 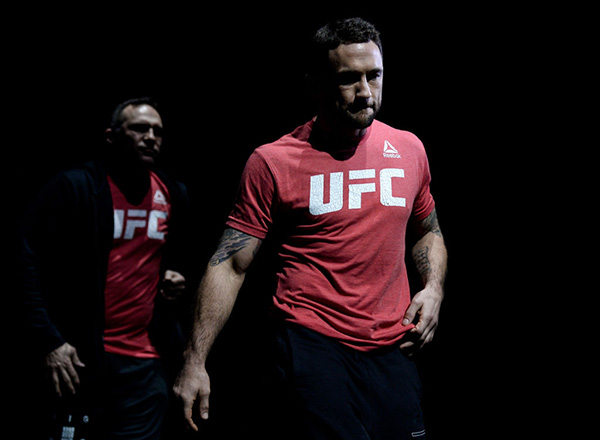 It was the question Frankie Edgar knew was coming, the curve ball that would address a topic he hadn’t been asked to answer in years.

Was he excited about “Jersey Shore” making a return to the airwaves?

“I am, but I haven’t caught the episodes yet,” he laughed. “Obviously, I’m pretty good friends with those people, so I gotta make sure I catch up on it. It’s a good buzz for Jersey right now, so let’s keep it rolling on the 21st.”

Ah, the 21st, the real reason for this conversation, and the one where there are no jokes about The Situation and company to be found. The 21st is this Saturday, the day Toms River’s Edgar returns to the Octagon for a rematch against Cub Swanson. At any other time, it would be an intriguing matchup. After Edgar’s March 3 loss to Brian Ortega, it’s become something else.

The defeat, which saw the former lightweight champion stopped for the first time in his storied career, was a devastating one for Edgar, his fans, and seemingly, his fellow fighters. Maybe it was because he could have opted out of fighting on the UFC 222 card, choosing instead to wait for the shot at Max Holloway’s featherweight title he was supposed to have that night. Or maybe it’s just after a career of showing nothing but class in and out of the Octagon, it hurt folks to see him lose in that fashion. Whatever it was, the response to his defeat didn’t go unnoticed by “The Answer.”

“It was special, it really was,” he said. “It just goes to show that I’ve been carrying myself the right way. If I was acting like a jerk my whole career (Laughs), I don’t think anyone would go out on a limb and say those nice things about me. In the end, it’s definitely about wins and losses in our sport and what titles you get and what you can achieve. But character is going to go a long way. Even in my wrestling days, I always felt I had a good rep among my peers, and that’s just because of the way I carry myself. I have young kids that wrestle now, and I coach kids that wrestle, and I’m always gonna try and set that example.”

Given the respect and admiration Edgar has earned, most wanted to see him take a little break, rest up, spend time with his family, and then make his return. The 36-year-old was on board with that plan, hoping to fight again in June, but that probably lasted around 30 seconds. Edgar wanted to get back in the Octagon as soon as possible, and what better place to do it in than his native New Jersey, where he hadn’t fought since beating Spencer Fisher over a decade ago.

“We’re in Jersey and I thought it was a good opportunity for me to get over this last one,” he said. “I haven’t fought in Jersey since 2007, so I want to come back and put a show on for the fans.”

He also had some demons to exorcise, so he made his intentions for a quick turnaround known. A few days went by, and he continued with his family’s move into a new house. Then his manager, Ali Abdelaziz, called with a fight. Atlantic City. Co-Main event. Cub Swanson.

And here he is. It’s his chance to get back in the win column, beat a top contender a second time, do it at home in Jersey, and also get a chance to fight in a place he missed out on competing in as a teenager.

“The high school wrestling state tournament has been held at Boardwalk Hall, I think since the 90s,” Edgar said. “But the two years that I wrestled in State my junior and senior year, they were renovating the building, so I never got to wrestle there. I fought there in other promotions early in my career, but it was in the auditorium, not in the big arena, so I’m finally gonna get my chance to compete at Boardwalk Hall, and that’s something I wanted to check off the bucket list.”

As for the rest, he’s going into the Swanson fight not just ready for battle and prepared to repeat his 2014 victory over the Californian, but with his Iron Army behind him.

“I got the support of everybody,” he said. “I talked to my team, I talked to my wife and my friends. They all know how I am and they knew how this last loss really stung. I think they know how much I want to erase that memory. It’s never gonna be erased, obviously, but it will definitely help soften the blow. And they know I do things the right way. I don’t do things half-assed or half-heartedly, and I’m approaching this one just like it’s the most important fight of my life.”

Edgar has looked at every fight like that, another reason to put him on the short list of best to ever do it in the sport of MMA. But is he still the fighter he once was? He believes he is.

“Everyone changes from fight to fight and when you’ve got some miles on you, you’re gonna change even more,” Edgar said. “I think he (Swanson) is gonna come in more motivated. Maybe he sees some weakness there he needs to exploit, but he’s gonna realize that I’m the same guy. I’m still motivated, I’m still hungry. I know I had that loss, but it wasn’t like I was getting beat up or anything; I felt I was doing really well in that fight. He (Ortega) caught me with a shot I didn’t see, rocked me pretty good, and that’s just the way it goes. But I’m going out there to prove I’m still the best in this division, or at least one of them.”