Edgar Expects a Super Performance in His Superfight

"I want to be number one. Having that title for almost two years and then
losing it, you miss it. You miss being called the champ and being
considered the best guy in your weight class." - Frankie Edgar 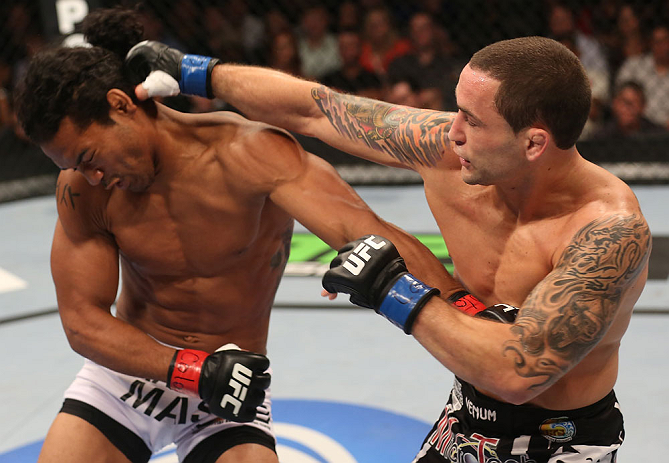 Frankie Edgar doesn’t deal in what ifs. There are only absolutes, and it’s that philosophy that has taken him from Toms River, New Jersey to the top of the mixed martial arts world.

So if you’re expecting him to wonder what would have happened if he had received the nod in either of his razor-thin UFC lightweight title fight losses to Benson Henderson last year, he’s just not playing that game.

“I think it was always in the back of my head to go down to 145 (pounds), but I really don’t know if I won (against Henderson) would I have definitely gone down or not,” he said. “My team’s been trying to get me to go down for this Jose Aldo fight for a while, so even if I won, I think this fight would have happened eventually.”

‘Eventually’ is one day away, and after spending over seven years at 155 pounds, a stint that included a nearly two year reign as UFC champion, Edgar is going 10 pounds south to face one of the sport’s pound-for-pound best in Brazil’s Aldo. On the line isn’t just the UFC featherweight title, but the opportunity to join Randy Couture and BJ Penn as the only fighters in UFC history to hold titles in two different divisions. Perhaps more importantly, the few remaining doubters that have followed Edgar throughout his career may finally fall to the wayside, giving him the respect he hasn’t just deserved, but that he earned.

“I think there’s always gonna be doubters, no matter who you are,” said Edgar. “I’m sure Anderson Silva has some doubters and Jon Jones has his doubters, so they’re always out there. But as I go on, I get more and more support. And for me, it’s not so much that I was trying to shut people up or prove people wrong; I’m just a motivated person, I like to win, and that’s what I want to do. I want to be number one. Having that title for almost two years and then losing it, you miss it. You miss being called the champ and being considered the best guy in your weight class. And that’s what’s motivating me and that’s what I’m gunning for.”

He’s had plenty of time to get up a nice head of steam for the Aldo fight, which headlines UFC 156 in Las Vegas on Saturday, since the bout was originally scheduled for last October, two months after Henderson-Edgar II. An injury to Aldo postponed the bout to this weekend, but Edgar hasn’t taken his eyes off the champion, not in a Rocky Balboa picture on the mirror way, but in a way that reminds him every day that this is the man standing between him and getting a title belt around his waist again.

“I’m definitely thinking about him every day, but not in an obsessive way,” he chuckles. “It’s just knowing that this is the guy I’m gonna be facing. And because I think of him, I don’t need to put a picture up, and I’ve got a coach in Mark Henry who doesn’t let me forget. (Laughs) He definitely keeps my mind focused on him and that’s just part of it. As soon as I find out who I’m fighting, they’re on my mind day and night.”

In Aldo, Edgar has a lot to think about. The former WEC champion is unbeaten in his last 14 fights going back to 2006, and despite his Brazilian Jiu-Jitsu black belt, he is known for his striking, which was most recently on display when he knocked out Chad Mendes in a single round in January of 2012. Even more specifically, he’s known for debilitating kicks to the legs and body, something Edgar is well aware of.

“You have to address it,” said the 31-year-old challenger. “That’s what I’m preparing for, and I’ve gotta make him not want to kick me. I’ve gotta do something, whether it’s check it or get takedowns or return with a bunch of punches. I’ve got to make him not want to kick me. It’s something I’m aware of, but that can’t be the full focus. I’ve got to go out there, do what I want to do, and fight my fight because if I’m worried about what he’s doing all the time, I’ll never be able to get started myself.”

And just to make sure he is ready for Aldo’s striking attack, two of Edgar’s newest teammates, UFC lightweight Edson Barboza and bantamweight up and comer Marlon Moraes, know a little something about striking, particularly Muay Thai.

“It’s been huge,” said Edgar of the addition of the two Brazilians to his team. “Barboza and one of his teammates who’s now one of our teammates, Marlon Moraes, are both very, very good Thai guys. Jose (Aldo), he’s become a great Thai guy, but I don’t think he’s a natural Thai guy, and they come from that background, so I couldn’t get a better look in that aspect of the kicking. The insight from these guys really helped me out and improved my game in leaps and bounds in that area.”

Don’t expect a Muay Thai clinic from Edgar this Saturday though. He’s going with what got him here, and it’s a mix of wrestling, boxing, cardio, and movement that’s hard to get a fix on before it’s too late. At featherweight, Edgar insists that won’t change, even pointing out that as he makes his way to 145, his cardio is better and that he may even be a little faster than usual. And if he brings all that to the Octagon on Saturday, especially with Aldo coming off a year off due to injury, there could be some celebrating going on at the Jersey Shore this weekend.

“I’m gonna do what I do naturally,” he said. “It’s kinda good that the pace I like to fight at will be to my benefit being that he’s been out for a year. I definitely want to go in there and test his mettle and see how he reacts to that long layoff.”

We already know how battle-tested Edgar is, and if he can push Aldo to the limit, this is a Superfight that will live up to its billing. But Edgar plans on going even further.

“I plan on putting on a super performance, so I can’t wait.”