"I know that when I fight Gray I want him to be at his best, he wants me
to be at my best and I’m sure the fans want us both at our best too.” - Frankie Edgar 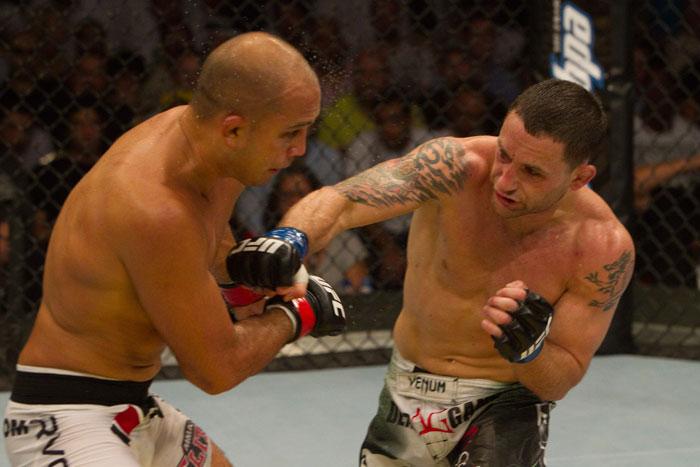 By now you’ve heard that the much anticipated third bout between UFC lightweight champion Frankie Edgar and number one contender Gray Maynard has been scrapped due to injuries sustained to both parties, with Edgar’s being a more serious injury involving his back and ribs.

“All of the reports are talking about my ribs, it’s actually my back,” says Edgar. “My back’s been bothering me for quite some time. A few weeks ago I had to take a week off so that my back could calm down and I was trying to fight through it. I got through it and it kept blowing out on me here and there but then I ended up blowing out a rib last week. My rib kept popping in and out and then last week my back went out on me really bad, so I went to see a doctor and he said I’ve got bulging discs and now I’m going to go see a specialist to see what he can do about it.”

Edgar made a day trip from New Jersey to Las Vegas on May 9th to see the UFC doctor while the annual UFC Fighters Summit commenced.

“I saw a UFC doctor yesterday and he said my L2 and L5 discs are bulged, and he recommended that I don’t fight right now,” Edgar said. “I can’t even put my socks on or hold my kids, it’s pretty bad right now.”

Edgar laid on his back on his living room floor during our interview, saying that laying down is the only position he can maintain right now that doesn’t cause him pain. Frankie said his ribs popped badly last Saturday while training at Ricardo Almeida’s Jiu Jitsu Academy in Hamilton, NJ.

“I think it was more my fault than anyone else’s fault to be honest,” he said. “I was trying to favor my back and probably putting too much pressure on my abs and compounded the injury when the rib popped out. I really don’t know for sure but it’s just unfortunate.”

A rupture of a disc causes the “shock absorbers” between two vertebrae to leak, causing the bones to grind against one another. Consequently, nerve irritation and bone instability causes severe back pain.

“I was planning on going through with the fight with the back injury,” says Edgar. “I didn’t want to postpone the bout at all. I feel like I lost the fight right now. I’m very depressed about this whole situation. I’m sure in a couple of days I’ll realize I did the right thing by going to see a doctor. It’s not fair to myself, to Gray, it’s not fair to the fans to take a fight like this. I mean, I’m never 100 percent healthy when I step in the Octagon anyway but this is something different. I’m not even 30% right now. When it’s really inflamed, the pain is excruciating. When it happened on Saturday the drive back home from Ricardo’s was the longest drive of my life.”

For Edgar, this is not the first time the champ has had a back injury. He had back surgery some eleven years ago as a result of an injury sustained while wrestling.

“I had back surgery when I was 18,” he said. “I don’t know if that’s correlated to this injury I have now but that’s why I’m going to see a specialist.”

Edgar says he’s not sure how long he’ll be out for, but is hoping for the best.

“I don’t know how long I’ll be out. I’m hoping surgery won’t be an option right now, I’m hoping I can rehab it and get better and get back to training in a month, but I can’t give you any solid answer right now as to how long I’ll be out,” he said. “From what I hear, Gray is pretty banged up and he wasn’t having the best camp either, so maybe everything happens for a reason. I know that when I fight Gray I want him to be at his best, he wants me to be at my best and I’m sure the fans want us both at our best too.”