Edgar back in win column in front of hometown fans

Making a quick turnaround from his March 3 defeat to Brian Ortega, Frankie Edgar got back in the win column in his first fight in his home state of New Jersey in over a decade, defeating fellow featherweight contender Cub Swanson via unanimous decision in their rematch at Boardwalk Hall in Atlantic City.

The boxing of Edgar was sharp in the first round, and while he wasn’t able to get the fight to the mat, a hard right hand momentarily wobbled Swanson and was clearly the biggest punch of the round. Swanson worked his jab and landed a hard kick in the closing moments, but his work rate didn’t match that of his opponent.

Palm Springs’ Swanson started and finished the second frame strong, but in the middle, it was all Edgar thanks to the combinations “The Answer” was firing off. Even when he would miss on a takedown attempt, he would follow up with hard punches or kicks, while Swanson was only throwing one strike at a time for much of the time.

The third may have been the closest round of the fight, but it still belonged to Edgar, whose consistent work rate from start to finish was the deciding factor for the conquering hero from Toms River, who had submitted Swanson in the fifth round of their first bout in November 2014.

The fight got off to an action-packed start, with Sherman the busier fighter throughout, while Willis clearly landed the most telling blows, wobbling the Mississippi native several times and nearly finishing him on the mat after dropping him with a left hand midway through the frame. Sherman weathered the storm, though, finishing the round strong.

The pace dipped considerably in the second and third, but Willis still stayed in the lead, and though Sherman had his moments down the stretch, he wasn’t able to even things up on the cards.

Branch confidently stood ready to trade with Santos as the bout commenced, and while Santos pecked away with his strikes, Branch was looking for the opening he needed to stun the Brazilian banger, and he got it just before the midway point of the first round, landing a flush right hand that dropped “Marreta.” More right hands followed on the grounded Santos, and referee Gary Copeland stopped the fight at the 2:30 mark.

The No. 8-ranked Sterling did a good job of controlling the action wherever it went in the opening frame, using movement and a busy attack on the feet and then taking charge with his grappling on the mat.

The No. 14-ranked Johns landed a hard knee to start off round two, but he wasn’t able to follow up with the takedown he was looking for. As they broke from a clinch against the fence, Sterling opened up with both hands and Johns responded with punches of his own. Sterling kept pressing, though, firing off combinations before controlling matters at close range in the clinch. After a restart from referee Liam Kerrigan, the striking match resumed, both fighters landing before the horn sounded.

In the third, the “Funk Master” continued to put in the work necessary with his striking and grappling, making it an easy job for the judges to render their identical 30-27 scores for Sterling, who improves to 15-3. Swansea’s Johns falls to 15-1. 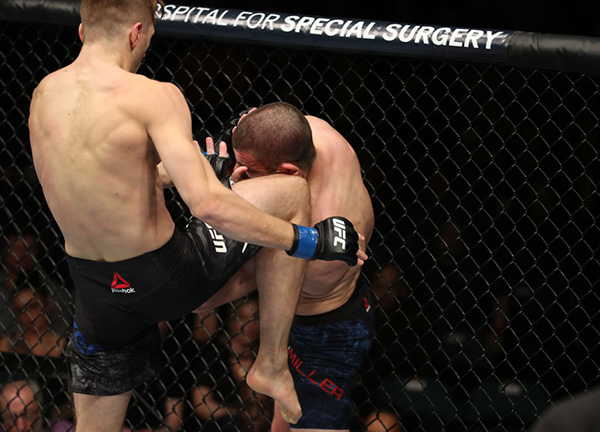 The first round was competitive early on, with Hooker doing a good job of controlling range and Miller as scrappy as ever as he traded with the New Zealander and even got the bout to the mat briefly. But in the midst of one exchange, Hooker landed a flush right knee to the head and that was all she wrote, with referee Gary Copeland stopping the fight at 3:00 of round one.