"There are ups and downs throughout the sport. There are injuries,
heartache, and sometimes it’s hard to keep pushing on, and that’s where
you separate the tough from the weak." - Eddie Wineland 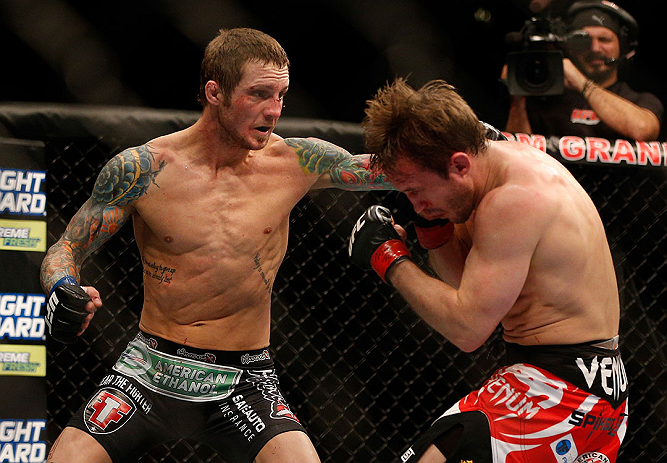 Near the end of the outstanding film The Usual Suspects, Kevin Spacey’s character Verbal Kint recounts one particular gruesome story about the unseen underworld menace Keyser Soze to US Customs agent Dave Kujan.

Verbal paints the grim picture of Soze returning home to find his family held hostage, how he dispatches the assailants, and eventually seeks retribution on everyone connected to the men he found in his house that day. He explains how Soze becomes known in the criminal world for his actions, only to drop off the face of the Earth without a trace.

“And just like that,” he says, blowing a puff of air at an imaginary object in his hand. “He’s gone.”

That’s kind of how Eddie Wineland feels about his UFC bantamweight title shot.

Last September, the 29-year-old from Chesterton, Indiana stepped into the Octagon with reigning interim champion Renan Barao in the co-main event of UFC 165 in Toronto. It was the culmination of a career filled with ups and downs, and, following the first round, Wineland was ahead on the scorecards after getting the best of the exchanges with the dominant Brazilian over the opening five minutes.

And then just like that – poof - it was gone.

A mere 35 seconds into the second round, the bout was over.

Wineland was dropped by a spinning back kick, and two punches later, referee Yves Lavigne had seen enough.

“I went back and watched the tape a couple times, but it’s hard to watch because that right there is what I’ve worked towards for 10 years of my life, only to have it taken away in 30 seconds,” Wineland says of his most recent fight, the frustration still simmering under the surface four months later, destined to remain there in perpetuity.

“It’s the referee’s discretion - I get it - but I wasn’t knocked out. If I was knocked out, I’d be the first one to say I was knocked out. It was a good kick - he dropped me - but if you go back and watch the replay, it glanced off of my glove and hit my collarbone. It knocked me down; it didn’t knock me out.”

The timbre of his voice changes as he shifts his thoughts from the past to the present, with an eye on the future. While coming up short in a championship fight might put some fighters on tilt, Wineland isn’t one of them, in part because of the success he had in the first round, the battles he’s already fought under the UFC banner, and a belief in himself forged over a decade of riding the rollercoaster that is life as a professional fighter.

If anything, his fight with Barao only strengthened his resolve and reinforced his belief that he can compete with the best in the world, and that given the opportunity, he’ll get another crack at the bantamweight championship somewhere down the line.

“And to go in there and fight the guy that is supposed to be the No. 1 guy in my weight class - No. 4 pound-for-pound or whatever he is right now - and have that first round go a decisive victory for me is a huge confidence booster. This guy is No. 1 in the world and I just beat him in the first round.”

Saturday night, just 50-odd miles up the I-90, Wineland will step back into the cage for the first time since his meeting with Barao, squaring off with Haiti-born Canadian striker Yves Jabouin in an electric pairing as part of the UFC on FOX event at the United Center in Chicago.

It’s a pairing that caught some off guard when it was announced.

Though Jabouin boasts four wins in his last five appearances, the Tristar Gym representative is coming off a narrow split decision win over Dustin Pague at UFC 161 in June, and falls outside the Top 15 according to the latest divisional rankings.

Having just fought for the interim title, dropping down to face an unranked opponent appears to be a drastic step back for the 20-9-1 Wineland, but he’s not concerned with any of that.

“You can’t take that guy lightly,” Wineland says of the man he’ll share the Octagon with on Saturday night. “He’s fast, he’s got some dynamic kicks - he may not be there in the rankings, but he’s in the UFC for a reason. I don’t think they would have put him against me if they didn’t think he was worthy.

“I think he possesses a lot of great skills and a lot of things that could present problems for me. He’s a great striker and it’s a dangerous fight. A lot of people are overlooking him, but I’m not one of them. I’m not taking him lightly. He may not have a number attached to his name, but he’s there for a reason.

The pace of his speech quickens as he talks about his impending fight - the thirst to compete again growing stronger as Saturday’s event draws closer by the day, the hour, the minute, the second.

“A lot of people are overlooking him, but I’m not one of them. I think a lot of fans think I’m going to run right through him. That’s my plan - my plan is to tear through this guy -but he is dangerous. I’ve got to watch out for him.”

For Wineland, his bout with Jabouin this weekend is just the next destination on the road he’s been traveling for more than a decade, and despite his most recent setback, his competitive fire has never burned hotter.

“If you and I were sitting down to sign a piece of paper, I’m going to try to sign it faster than you because I want to be done first; that’s just who I am,” he says, laughter chasing words.

“I started fighting when I was 18 years old; I’m 29 now. February will be 11 years that I’ve been fighting, and I started before it was the cool thing to do because that was me - I wanted to test myself one-on-one against another man to see who the better man is. It just so happens I’ve got some God-given talent, and it allowed me to win the first WEC belt.

“There are ups and downs throughout the sport. There are injuries, heartache, and sometimes it’s hard to keep pushing on, and that’s where you separate the tough from the weak.

“I’m still right there,” he adds. “With a couple of good wins - my name is still there, so it’s just about getting back to the grind and getting back to my winning ways. I’m still hungry and I know what I want, and if I keep fighting, keep winning, they can’t deny me that shot again.”