Eddie Gordon: Out to Steal the Show at UFC 181

"I know fans see fighters who win The Ultimate Fighter a certain way, but I want to go out there and make a statement and let the division know that I’m here." - Eddie Gordon 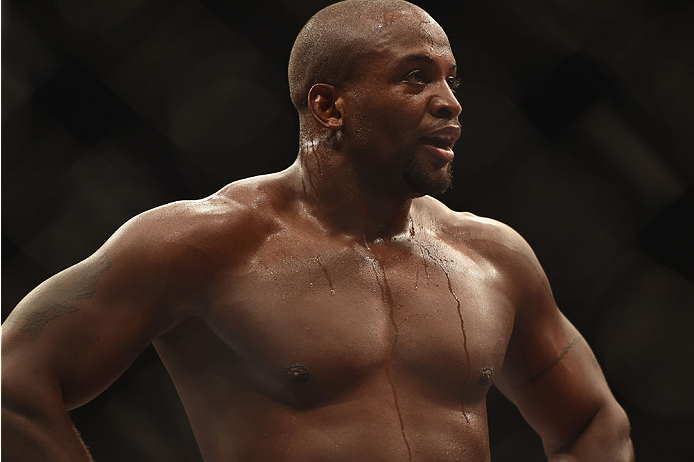 There is a lot of excitement in Eddie Gordon’s voice these days and the reasons behind his enthusiasm are absolutely warranted.

Not only is the 31-year-old New Yorker coming fresh off a dominant performance that made him The Ultimate Fighter season 19 winner and put his name on the coveted six-figure contract that comes as the spoils of victory, but he’s also a key member of one of the most dynamic camps in all of MMA at Team Serra-Longo. Those elements add up to put Gordon’s confidence at an all-time high and have him ready to begin his run under the UFC banner.

The Long Island-based outfit has one of the most talent-rich rosters in the world, and the individual successes of the fighters who train under Ray Longo and former welterweight champion Matt Serra have combined 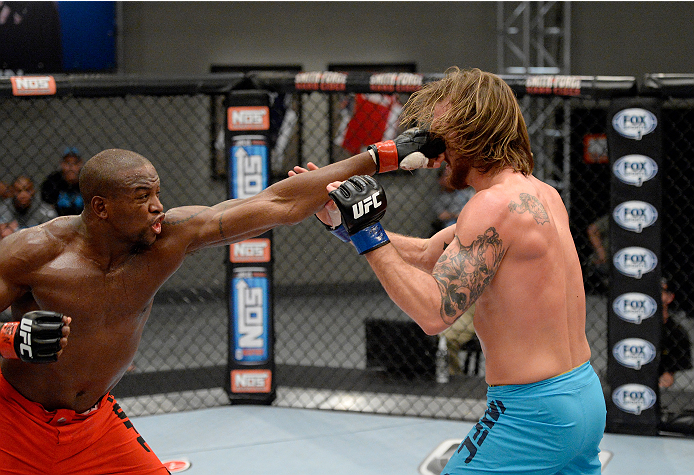 Mike King" width="300" height="205.3314121037464" align="right" /> to bring the team world-class recognition. Gordon is thrilled with how his teammates have been performing and he’s eager for his chance to step up to the plate and keep the positivity rolling.

“It’s priceless, man,” Gordon described. “We’ve been on such a hot streak. Al [Iaquinta] just finished Ross Pearson, who is a great fighter, and I train every day with Chris Weidman, who is the middleweight champion of the world. I’m truly, truly blessed and I feel almost spoiled. I don’t have to travel around the world to get good work in. We train hard together and we all look out for one another. We truly want to see everyone on our team have success. For me, training with the middleweight champion of the world, I know I’m not going to be fighting anyone as high caliber as Chris is. Going through training camps with him and picking his brain is a huge advantage I have going into that Octagon.”

While “Truck” notched his first official victory inside the Octagon when he destroyed former housemate Dhiego Lima in the first round of their tilt at the TUF 19 finale back in July, he’s been around the sport long enough to know the perception and stigma that comes with winning the reality-based fighting tournament. Gordon understands how fight fans may question just how legit his skills truly are, as plenty of former TUF winners have fizzled and faded following their moment in the spotlight.

Yet those fighters didn’t train and test themselves against the reigning middleweight champion day in and day out. And therein is where Gordon sees the advantage. The Long Island representative faces undefeated phenom and current 185-pound title holder Weidman on a daily basis at LAW MMA, and in doing so has been forced to consistently elevate his game to survive in such deep waters. Working with the “All-American” has Gordon ready for anything that comes his way inside the Octagon, and he’s eager to set about proving just how real he can get under the bright lights of the sport’s biggest stage.

“I know fans see fighters who win The Ultimate Fighter a certain way, but I want to go out there and make a statement and let the division know that I’m here,” Gordon said. “I’m fortunate enough to train with the best guys in the world and that alone sets me apart from the rest of the guys who have won the show before me. Every day I go into that gym I know where I stand in this division. I don’t go crazy looking at records and rankings. I’m very confident in my abilities and the next thing to do is go out there and show everybody else what I already believe to be true. 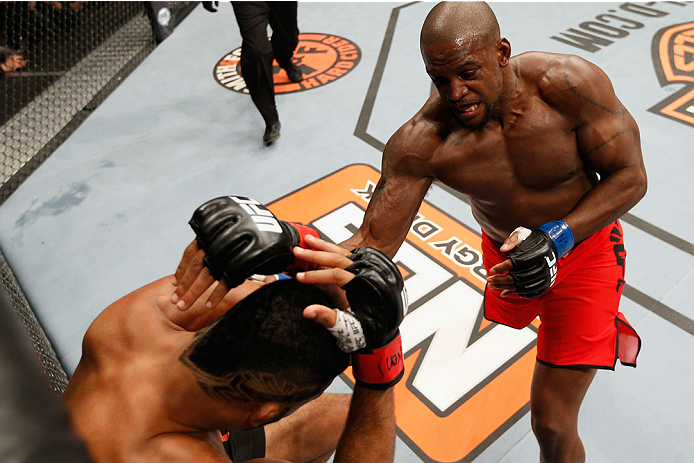 Even though Gordon was happy to get the victory over Lima and a successful UFC debut under his belt, his next opportunity to show and prove is rapidly approaching. He will return to action this Saturday night when he faces TUF 17 alum Josh Samman at UFC 181 in Las Vegas in a fight Gordon acknowledges as a crucial test at a critical juncture of his career.

Winning The Ultimate Fighter was a huge step because it earned him entry into the UFC, but his bout against Samman represents his first big step into the increasingly competitive ranks of the 185-pound fold.

The heavy-handed scrapper knows his Miami-based opponent is going to present some difficult challenges, but Gordon believes he’ll be ready to handle anything and everything that comes his way.

“You never want to get caught up staring at your past successes because the future will run you over,” Gordon said. “After I won the show I recalibrated all of my goals and I’m very excited for this next fight. One of the reasons is that I don’t have a relationship with [Samman] like I did with Lima and he’s kind of a talker. More importantly, he has a very good record and the UFC looks at him as a highly-touted prospect. That’s a huge challenge for me and I’m ready to showcase my abilities.

“The fans are going to win in this fight. Stylistically, I think he’s good everywhere, but I don’t think he’s great anywhere. He’s a well-rounded fighter with great cardio, and he’s usually more physical than the guy 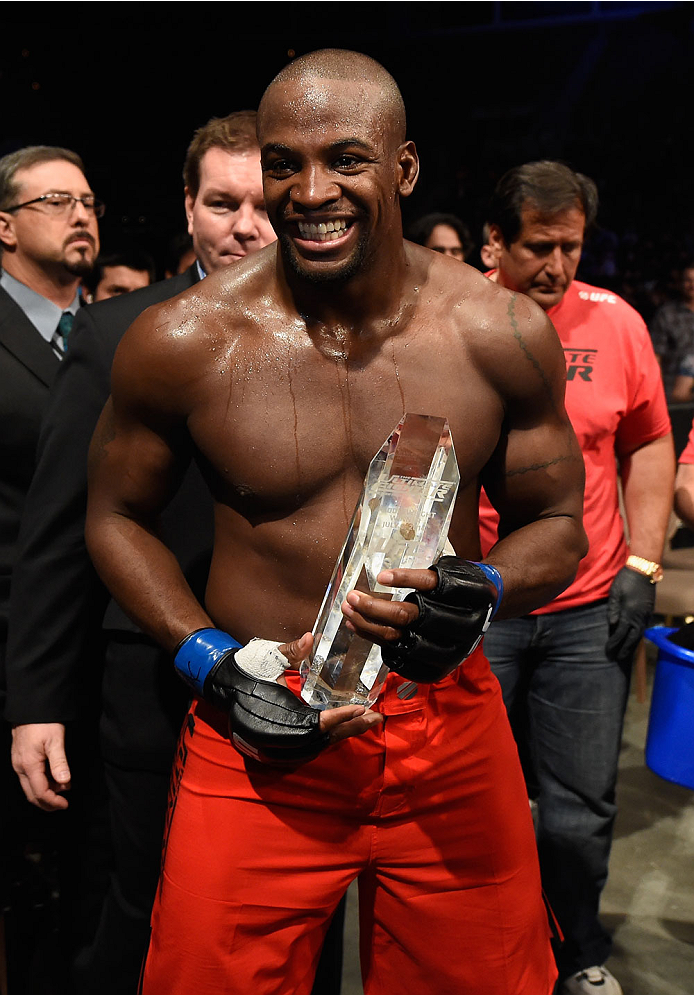 that he’s fighting. I feel like he has a bully mentality and that’s going to make it exciting. We are both going to come forward, meet in the center of the Octagon and let the fireworks begin.”

When the cage door closes behind him on Saturday night at UFC 181, Gordon’s next opportunity to shine will officially get underway. He may have yet to show fight fans and the UFC brass his full potential, but having a clear understanding and gauge to how he fares against the best middleweight fighter in the world is a unique measuring tool. And it is one Gordon has every day at the ready.

Gordon knows there will be expectations surrounding his rise up the middleweight ranks and the pressure for him to succeed is already something he’s accepted because that’s exactly what he wants. Gordon feels the energy when all eyes are on him, and if by chance some aren’t when his fight begins on Saturday, he has every intention of making sure every eye in the house is locked on him when the smoke finally clears.

“I’m constantly talking to my coaches and training partners and they all tell me that I’ve evolved,” Gordon said in conclusion. “Things are just clicking more than they ever have before. It’s my time to take advantage of the moment and go out there and seize the day because this card is stacked from top to bottom. And I’m trying to steal the show and be the one who everyone is talking about on Monday morning.”