Ed Herman: One of the Last Men Standing

"There are a lot of guys my age that have rejuvenated their career or
made a run and got a title shot, so I don’t think that’s out of the
picture for me because I’m always trying to get better." - Ed Herman 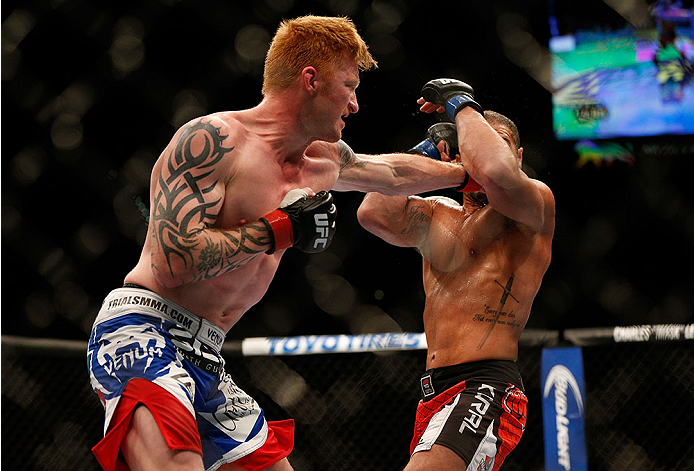 And then there were six. Nine years after the premiere of The Ultimate Fighter in 2005, only six fighters from the first three seasons retain a place on the UFC roster. From that third edition of the show, just two remain – middleweight contender Michael Bisping and another 185-pound veteran, Ed Herman.

“I didn’t expect any different,” he said. “If you look back to those episodes when I was running my mouth, I was talking about me and Mike being the best guys on the show, regardless of weight class. I guess I was right.”

Herman didn’t win TUF 3, but he came close, losing a razor-thin decision to Kendall Grove in June of 2006. It was a fight so good that, like the first final between Forrest Griffin and Stephan Bonnar, it earned both fighters UFC contracts. So it’s no shocker that when Herman is asked about the cast, he admits that Grove’s absence from the current roster is the one that surprises him the most. But what is it about the Washington state native that has kept him here while most of the rest have fallen by the wayside?

“Being a bad son of a bitch, I guess,” he deadpans before letting out a huge laugh. And that could have something to do with it, but when he stops laughing, he says, “I’m always trying to get better. If you know anybody who’s worked with me or coached me, I’m always looking to get better. I don’t care who you are, accomplishment wise; if you’ve got something I can learn from you, ‘yes sir, yes coach, I’m ready to learn, all the time.’ I think a lot of vets are set in their ways, like ‘I know this, you can’t teach me this until you’ve been in the game as long as me,’ but I’m always learning from young guys, and that’s part of it.”

Back in action this Saturday night in Cincinnati against Rafael Natal, Herman will be competing in his 17th bout under the Zuffa banner (16 in the UFC, one in Strikeforce), a remarkable show of longevity any way you cut it. And while he credits his willingness to learn as the key, it may be just as much - if not more - a testament to his maturation process.

“Me and (Chris) Leben, we were both young, coming up, having a good time, and we could get away with it being younger,” Herman said of his early days in the UFC. “But I didn’t necessarily live up to my potential back then because I was being young and stupid and partying and stuff like that. So I’ve definitely matured and grown up and it’s cool because I grew up in the UFC. People who have been fans for the last ten years have seen me from when I was a 24-year-old kid to a 33-year-old man.”

These days, the former Portland hothead is a family man in Colorado, a part-owner of the Trials MMA gym in Fort Collins, and someone who posts pictures of his kids on Twitter.

“It was good for me to get out of Portland and focus on my family and my training out here in Colorado,” said Herman, who is in a lot different place than he was when he was rehabbing his knee from three surgeries back in 2009-11. Back then, Herman tended bar to stay busy and put a few bucks in his pocket, and one particular instance not just stuck with him, but the writer he told it to.

“People are like ‘hey, you’re that guy who used to be in the UFC. Aww, here’s an extra buck. Sorry buddy.’”

I reminded Herman of this when we spoke, as it shows how far he’s come in the last couple years.

“It could be hard as an athlete when it comes to injuries and stuff like that,” he said. “So that always sticks with me and I think that motivates me every day to keep looking forward on ways that I can make money in the future and support my family so I don’t have to end up sitting there again and feeling like that.”

“If you see me behind the bar bartending, hopefully it’s because I own the damn bar.”

If things go according to plan, he may very well get that wish. A win over Natal would leave him with a 5-1, 1 NC record in his last seven fights. Not bad for a 33-year-old, and while he’s not as old as his former training partner Randy Couture was when he made one of his runs to a UFC title, Herman isn’t afraid to pull the senior citizen card if necessary.

“There are a lot of guys my age that have rejuvenated their career or made a run and got a title shot, so I don’t think that’s out of the picture for me because I’m always trying to get better,” he said. “And as long as I can stay healthy, I always feel like I can be a threat to go on another run. There’s nobody in the UFC right now who I don’t think that I have a chance of beating on the right night. If I can run off two or three wins again, I’ll be calling for it, like ‘Give an old man a shot.’”

Now wouldn’t that be a story for him to tell the customers in the bar he owns one day?