Ebersole Retires After a 15-Year Career 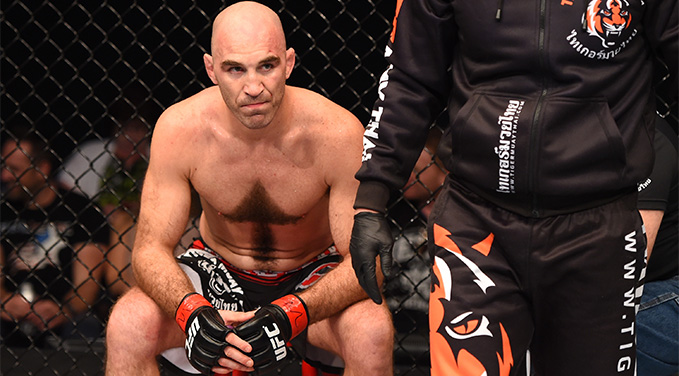 Upon his retirement Saturday night after a loss to Omari Akhmedov at UFC Fight Night in New Orleans, Brian Ebersole described his career as a case of cheating the system, but despite not having the world-class wrestling credentials of some of his peers, he not only put together a career to remember in mixed martial arts, but he did it his way, to the tune of a remarkable 51 wins in 70 fights.

And there were no shortcuts along the way.

“The highlight of my career was probably the fact I cheated the system,” the 34-year-old Ebersole said. “I was a decent wrestler, but I never had the accolades of some of these guys like (Daniel) Cormier and (Josh) Koscheck. It was good to come in here and have such a successful MMA career and to get through as many fights as I did, especially early on, without getting beat up.

"We see it now, when guys have two or three fights and that's enough. We see guys have one fight and they don't come back. There are guys who see who they're fighting on amateur night and don't show up to the fight. So to be able to push through and fight karate guys, fight boxers, fight big, scary heavyweights, and actually get through that and get to where it turned into an art, instead of a fight, really capped my career off.”

A pro since 2000, the Indiana southpaw came up the hard way on the local circuits of the Midwest and Mexico, fighting anyone and everyone along the way, including Carlos Newton, Hector Lombard, Dylan Andrews, Nick Thompson, Matt Horwich, Alex Serdyukov, Kerry Schall, Tony Fryklund, Ed Herman, Kyle Noke and Alex Schoenauer.

In 2011, on the heels of a seven fight winning streak, Ebersole got the call to join the UFC roster, and he made an immediate impression with a Fight of the Night decision win over Chris Lytle. The charismatic veteran went on to defeat Dennis Hallman, Claude Patrick and TJ Waldburger in succession before losing back to back bouts against James Head and Rick Story.

In September of last year, Ebersole returned to the Octagon and the win column with a decision victory over John Howard, but as the injuries piled up, he considered retirement.

“The last couple of fights, I've really had to tough it out,” he said. “Fighting Rick Story really hurt my lower back. I was seeing chiropractors every day for almost two weeks before the fight. That was terrible.

"Getting the win against John Howard, I thought about it, and was like, ‘man, I've got one more year in me before I really settle down and life takes over and my wife wants to get back to work and resume her career.’ This year was me being greedy.”

But after the loss to Akhmedov, which left his record at 51-17-1 with 1 NC, it was time to make it official.

“I planned on retiring in November after the fight in Melbourne, but we'll call it a night tonight,” he said. “I've had a long career in MMA, a long career in wrestling and this thing [leg] has been bugging me throughout my camp. It was just lingering stuff. You try to go harder, and things start to flare up.

"I've been very bipolar in my training camp: sprint, rest, and rest longer, then wake up and sprint. It's been hard, a hard camp. The stress of worrying about being healthy and worrying about my performance. It's too much. (But) I've come a long way. I was a wrestler my whole life. Once I quit wrestling in college, this (MMA) was the thing I turned to. I extended it another 15 years. I can gracefully hang 'em up and call it a day.”