Read on for the latest installment in UFC.com's weekly series of articles on proper nutrition from the top athletes in the UFC...this week, bantamweight champion Dominick Cruz 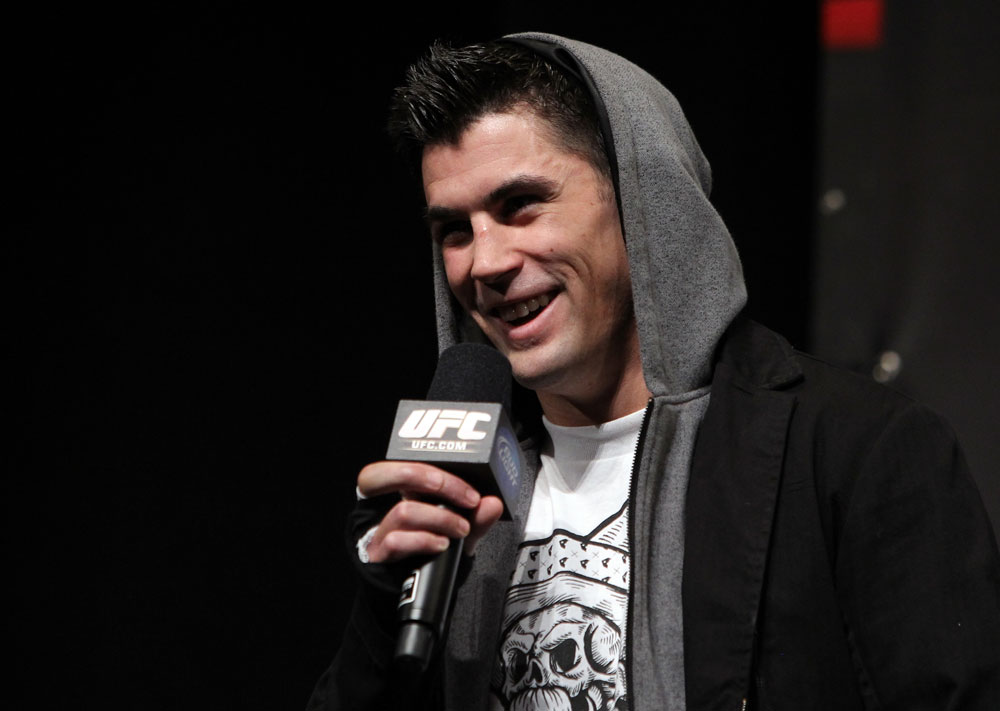 Tony Mandarich. One of the greatest offensive linemen in college history. And … arguably the biggest bust in the NFL draft history. A bear of a man -- 310-pounds – who once estimated he consumed roughly 10,000 calories a day. Back in the late 1980s, the No.1 pick’s marathon eating blew a lot of minds.

Turns out, 135-pound world champ Dominick Cruz is quite the GI-normous grubber himself. Pound-for-pound, in fact, Cruz’s daily wolf-downs can go toe-to-toe with Mandarich’s famed caloric consumption. With little effort, it seems.

“He (Cruz) probably eats about 5,000 calories a day,” says Doug Balzarini, Strength and Nutrition coach for Cruz and the Alliance MMA Fight team.

The crazy thing is, with all that munching, Cruz said he has never topped 160 pounds in his life. Having to moonlight as a head coach for The Ultimate Fighter Live AND simultaneously train for a rubber match with arch rival Urijah Faber this summer, Cruz said calories are a huge deal with his ultra-busy schedule and quest to win his 10th straight fight. A fast-food diner for much of his pro career, Cruz (19-1) said age and body changes forced him to reform his anything-goes refueling. A month into his dramatic dietary transformation, one of the sport’s hardest and craftiest workers let us inside an aspect of his training that he feels will prolong his championship reign and longevity in the sport.

Dominick Cruz diet versus Urijah Faber diet. I asked Urijah and he said his diet wins by first round KO. You agree?

“Right now? Urijah’s not aware of my dietary shift. There’s a lot of things that Urijah is not aware of about me, but he continues to make assumptions, which is fine. Back in the day, I’ll give him a knockout on the diet. I ate like crap. I didn’t have a diet (chuckles)! But you can tell him this: even though Urijah had a knockout in the diet department, I beat the crap out of him on Carne Asada burritos and Jumbo jacks (sandwiches from the menu of the Jack in the Box restaurant). How’s that make him feel?”

Up until a month ago, what were you eating?

"When I was commander in chief of the diet, I ate whatever I wanted whenever I wanted. I just trained all the time and burned it all off. I built a nine fight winning streak on breakfast jacks and Carne Asada burritos, honestly. (Looks over at teammate Phil Davis). Phil eats as s----- as I did and he’s still shredded and a monster. So food is important no doubt, but age has something to do with it and it’s about longevity in your career. At some point you have to start taking good care of your body when you’re beating the crap out of it physically. You have to put good fuel in it. It’s a lifestyle change, and you’ve got to be willing to make the lifestyle change."

What are the don’ts in your diet right now?

"I’m trying to stay away from sugar. No fast food. Again, Doug, my nutritionist knows better than me. I’m not going to sit here and pretend that I know a lot about this. There is a reason that I hired a professional to do this for me. I am 100 percent all-in at whatever he throws in front of me and tells me to eat, as long as I’m full at the end of the night."

Least favorite new food that you are eating?

“The nastiest thing I’ve eaten so far (yells to Doug, his nutritionist). Hey Doug, what’s that nasty a—green lettuce that you make me eat?"

Why the shift in diet now?

"I’m getting older. I’m 27 and my body is changing. It’s getting harder to make 135 pounds. My workload is twice as much with TUF right now so it’s even more important that I stay healthy and eat clean and that my body burns fuel right. I started on this diet like a month ago. I feel great. I wish I had done it sooner but it was one of those things where you either have the time and the money for it, or you don’t. And up until recently I didn’t."

A lot of people have problems dramatically changing their diets, like going cold turkey and switching things up on their taste buds. Have you experienced any of those kinds of withdrawals or cravings?

Cruz: No, I love eating and I love the taste of food, but I’m all about getting what I need in me to perform and have my body run right. So if it tastes like crap I will eat it anyway. I just want to feel good when I train.

Give fans an idea of a typical day in the eating life of Dominick Cruz.

"I’ll wake up at like three in the morning and have a whey protein shake, I’d say it’s about 600 calories. I go back to bed and wake up again at 7:30 (a.m.) and have a five egg omelet with spinach, mushrooms, cherry tomatoes, egg whites and two pieces of … ummm…(yells to his strength and conditioning coach, who is seated nearby, and says, ‘Hey what kind of bread is it that you make me?”)

"Yeah, Ezekiel bread. Man, this guy will tell you better than I can. So I have that meal at 7:30 a.m., then I go to the TUF set, coach and then I have a Vitargo shake. It’s a supplement drink. I’m hypoglycemic, so it gets my blood sugar back in line before I go to train. So I drink that and train. After training I eat a peanut butter and jelly sandwich with organic peanut butter, organic jelly and Ezekiel bread. I have a protein shake with that as well.

"Then I go home and eat lunch. Lunch can be anything from chicken breast, broccoli, to sweet potato, to pasta with ground turkey meat, organic tomato sauce, stuff like that. A big meal.

"Then I’ll rest, go back to TUF and coach my team. After coaching, I’ll have another Vitargo shake before my personal evening practice. Then I go home and have my biggest meal of the day – it might be ground turkey patties with vegetables and a huge salad, another sweet potato. I’ll eat any complex carb mixed with protein and vegetables."

That’s a massive amount of eating and it sounds like that’s important because you want to be as big as you can before making the cut to 135 pounds … is that correct?

"Right. My philosophy is, no matter how much I eat, with how hard I train I will never get over 160 pounds. That’s the heaviest I have ever been in my life. I walk around no heavier than 155 pounds. So I’m trying to stay heavy and put on as much muscle as possible in between fights. Then, three weeks out of my fight, that’s when I’ll start to cut my diet. I get down to about 150 pounds two weeks out of a fight.

"I’m doing two of my own workouts a day, plus two workouts coaching my team at TUF."

Obvious question: You’ve always had great cardio and been a great athlete, so that’s never been a problem. So what advantages have you specifically experienced with this more nutritious and advanced diet?

"The biggest thing is, with coaching TUF and training for a title fight, I have a heavier workload now than at any time in my career, besides when I worked full-time and trained fighting full-time years ago. But that’s what I’m doing again now. That’s four workouts a day, so it’s extremely important to get all the vegetables and nutrients and eat as much as possible throughout the day so I don’t atrophy my muscles. My energy levels are a lot higher and I’m not quite as lethargic in between training sessions. It might even help with alleviating lactic acid in the body and having less sickness because you’re getting the nutrients that you need."

Talk about being hypoglycemic.

“I’ve been like that since high school. I get light-headed, really, really agitated and cranky when my sugar levels are off. And I’ll shake profusely, even in the middle of training. So I have to get sugar in my body and usually the Vitargo gets me set again."

If you had the time to cook, what would be your go-to meal?

Tune in to UFC.com every Thursday for more nutritional tips from UFC superstars...