Eat Like the California Kid - Urijah Faber on Food

Read on for Urijah Faber's thoughts on proper nutrition... 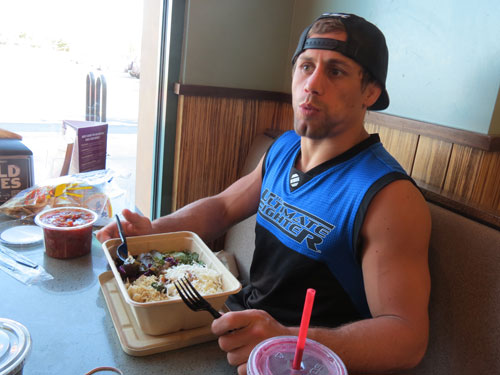 Urijah Faber and the Art of Instinctive Eating

“Man, this is good!” Urijah Faber raved, shaking his head in bliss, after a bite of his lunchtime creation.

The ensuing 2 pm feast at a Las Vegas grocery store was enough to make a medieval king jealous.

Watching Faber -- who battles Renan Barao (30-1, 1 NC) for the UFC interim bantamweight title at UFC 149 this Saturday -- build his own salad from scratch reveals a diet as dynamic as he is charismatic. On this afternoon, his table is engulfed with a $28 lunch, standard for him. There is a massive salad (maybe triple the size of a normal salad), a bag of chips, a large container of salsa and a 16-ounce smoothie to wash it all down.

“Traditionally I’ve always eaten a lot of salads,” the 32-year-old said, “because growing up we always ate a lot of salads … While I was in the womb, before I can even remember, I was conditioned to enjoy a healthy diet.”

As they say in the fight game, Faber “walks” most of the year in the neighborhood of 156 pounds. Before his fights, the former Division I wrestler cuts down to 135 or 136 pounds, then rehydrates immediately following his weigh-in. Over a 30-minute lunch, the sport’s most popular bantamweight offered his unique philosophies on food and nutrition. The picture he painted is one of a man who doesn’t deprive himself -- but instead eats mostly whatever he wants, mindful of always seeking out the highest quality ingredients.

He has sipped Pepsi and Coke a time or two, but has otherwise shunned conventional soda pop. He draws parallels between his own views on food and the ‘everything is the devil’ hang-ups of The Water Boy, Bobby Boucher. Spontaneity and impulse are central themes to the Faber “diet.” This is a man who always listens to his gut. Here is a compelling sit-down interview with Urijah Faber on the art of Instinctive Eating:

What are some of the ‘Don’t’s on your eating list?

“There are a lot of things I don’t like. It’s like the Water Boy, Bobby Boucher and his mom saying that ‘Everything is the devil.’ I had that growing up. Like, I’ve never had a soda pop or a Pepsi. I’ve tasted it a couple times but never really drank one. It’s like, you know, ‘It’s the devil!’ (chuckles). I’ve had root beer …and I’m not a complete weirdo when it comes to stuff like that, but I don’t ever drink soda. I try to avoid candy but sometimes I crave it and I’ll have a little. I don’t eat red meat very often; I just don’t like the way I feel when I eat it. On occasion I’ll have a good steak or In N’ Out burger if I feel like it. I don’t like milk very much … I’ll drink goat milk, I think it’s better for your body and easier to digest. I’ll try to get it as close as ‘out of the goat’ as possible without sucking on the nipple of the goat (chuckles).

“I don’t avoid milk in all cases. I actually like Egg Nog at Christmas time. But milk, in general, I feel like it makes a lot of mucous for me and I think there can be a lot of hormones in milk that I don’t like. It’s just another one of those things that mom raised me to be anti against since I was young.

With your team on The Ultimate Fighter, do you simply stick to teaching techniques, instilling confidence, etc… Do you actually go over dietary considerations with them as well?

“If I see there is a problem with someone, I’ll definitely step up and say something about their diet, at least make them aware. Because a lot of times people don’t even know that they’re not eating right. For example, this is a salad. Is a salad from McDonald’s the same thing? Because they have ‘em with iceberg lettuce, cheese, croutons and tomatoes … so it sounds great.

“We had this guy on our team from Hawaii and he was having the hardest time making weight. He’s like, ‘All I had last night was salad, blah, blah, blah. So he had this family get-together and invited the whole team over. They had three types of salad: One was a fruit salad with marshmallow mix. Another salad had fried bacon bits, wonton sticks, iceberg lettuce and chicken. And then they had like an iceberg lettuce salad. They all were salads, but they were all super unhealthy! So I started thinking, ‘Yeah, he just had salad but it had a bunch of ranch dressing or something on it.’

The Dominick Cruz diet vs. Urijah Faber diet. Who wins?

“I’ve talked to Dominick and spent some time with him and it sounds like his diet is horrible. He was kind of making fun of himself about it. It’s a testament to his mentality. He’s pretty tough mentally from the crap he puts into his body. So he does pretty well.

“So, hands down, first round KO, Faber wins the diet contest.”

Tell the fans reading this about your lunch today and why you chose it.

“Traditionally I’ve always eaten a lot of salads because growing up we always ate a lot of salads. Like this salad here has chicken in it, some cheese, a lot of olive oil and garlic, apple cider, some dark green lettuce, couscous, some Israeli couscous – which I don’t even think I’ve eaten that before – but it looked good so I threw it in there.

“There are a lot of complex carbohydrates in here, a lot of saturated and unsaturated fats, fiber, protein and a whole lot of flavor. Protein is important. Protein isn’t necessarily an energy source but it’s for rebuilding your muscles and you utilize the creatine that you get from meat. The first three to seven seconds of explosive activity you use creatine. Some people take creatine supplements … Everybody has creatine naturally and some people have high levels naturally, but you can also get it 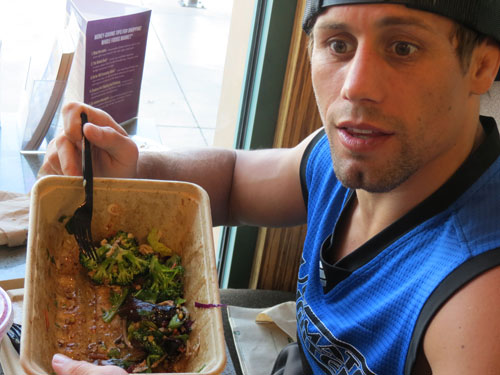 “So this is a high calorie meal; I don’t count calories but I know there are a lot in here. I need a lot of energy and this will satisfy me. I’ve got a smoothie for sugar (16 ounce mix of blueberries, strawberries, banana, low-fat yogurt and orange juice). I also love chips and salsa. It’s something that I crave. I’ve seen people go on diets where they try to avoid a bunch of things. I’m not like that. I’m more of an instinctive eater. I’m craving chips probably because my body is telling I need some salt and carbohydrates – and probably because it just tastes good. You want to enjoy what you’re eating … Man, this is so good.”

What figures, people or sources have most shaped your philosophies on eating healthy?

“First and foremost, my family, my mom and dad and how they raised us and what they taught us to like. If we were watching movies we had popcorn and smoothies. My mom would cook with olive oil instead of butter, honey instead of sugar, and all those kind of things. So I learned a lot and created a regimen through them.

“I also had a lot of influences when I was in college at UC-Davis (University of California-Davis). I took classes, did research and educated myself as to what’s behind good food and what makes it healthy. My third big influence was the wrestling world. Cutting weight is so important in our sport and I’ve had a lot of good coaches who built knowledge through trial and error. So I’ve learned a lot from them.

How much of your diet is based on upbringing, how much on what you have learned from others and by studying nutrition, and how much on instinct?

“While I was in the womb, before I can even remember, I was conditioned to enjoy a healthy diet. After that I started learning more when I was an athlete. I learned a lot through trial and error as an athlete. I learned what you should and shouldn’t put into your body, especially at certain times of the day (what Nutrition expert Dr. John Ivy of the University of Texas calls “Nutrient Timing”). The scientific part of my diet is things like … I don’t want to eat a steak an hour before a workout. Steak takes like six to eight hours to digest so you can’t utilize that energy for a long time. A piece of bread trickles into your system and you can use it over a couple of hours, it’s steady energy. Sugar (holds up his smoothie) is a right away energy source, in 15 to 45 minutes I’ll feel the effects of this sugar. 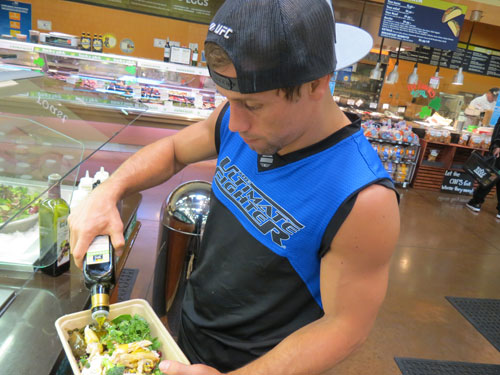 “Sometimes it’s good for me to have simple carbohydrates, like white rice. I come down 21 pounds from my walk-around weight (roughly 156 pounds) to make 135 pounds. So when I get down to about 10 pounds over (145) it makes sense to have high energy dense food. So it’s fine to eat white rice on an occasion like that, but for the most part I like complex carbohydrates – beans, rice, vegetables, couscous, all those grains, nuts, they are complex carbohydrates.

Tell us the difference between weight cutting for wrestling versus a UFC fight?

“You can imagine, if you weigh in for a wrestling match and you have to compete in an hour, you’re not going to cut as much in that final week. You have to come down gradually and be able to function right after you make weight. It may mean, for example, if I were to make weight for wrestling, I don’t want a full meal. I want something that is going to give me some energy quick: a bagel, power bar, fruit, some sort of recovery drink with electrolytes and sodium to get myself hydrated. Just enough to get me through my seven minute competition. You need to be able to function for seven minutes at the highest rate possible.

“I’ve had twenty something title fights, so when I’m making weight I have a whole day to recover. So I can be a little more dramatic with my weight loss and deplete my body more during the week of competition, (and after weighing in) then get that rebuilding, rest and completely rehydrate. But I have a lot more resources to get ready for a 25 minute battle, versus seven minutes in wrestling. If I had to make weight in MMA the way I did in wrestling, and compete for 25 minutes, I would be in some serious trouble.”

Do you cook? What are some of your go-to dishes?

“I’m a really good cook. I can cook everything my mom cooks – just not as well. I think that comes with time. Growing up we had to make a lot of food for ourselves. My mom would make us cook dinner once a week during high school, so my brother and I would have to make dinner. My parents also worked their butts off so I was always cooking stuff for myself. I make smoothies, salads, Italian dishes, I know how to steam vegetables … I do it all.”

For more info on the Faber diet you can log onto Faber’s Web site at http://urijahfaber.com/category/eat-like-a-champ/.

Tune in to UFC.com every Thursday for more nutritional tips from UFC superstars...