Easton Aims to Return with a Fight of the Year Performance

"This is our opportunity to show what the ‘35ers are about, especially the guys that like to fight." - Mike Easton 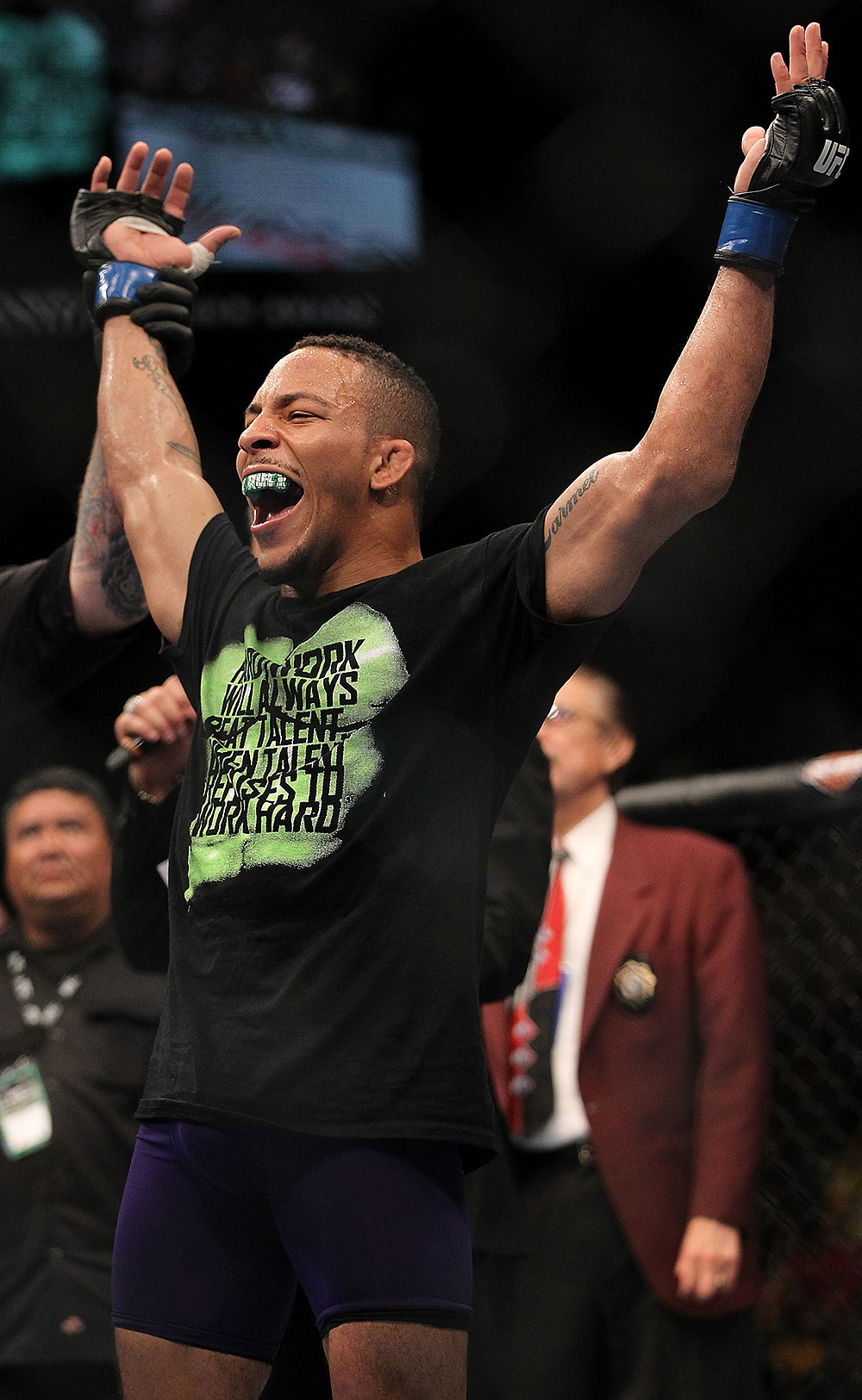 Pull a coin out of your pocket, flip it in the air, and call it. Sometimes you’re right, sometimes you’re wrong. Even when you’re riding a hot streak – two, three in a row – the next one could be the one that goes against you.

Fighting can be like that sometimes, especially when two evenly matched competitors are sharing the cage - neither giving an inch, but neither pressing too hard to claim any extra space either. One jabs, and the other counters. Attack and defend, now switch. For 15 minutes, the pattern repeats itself without anyone gaining a clear, distinct advantage.

There are plenty of fights we call “coin flips” on paper, and many that land in the judges’ lap feeling like that might be a reasonable way to render a verdict, the action in the case so close that scoring each round comes down to splitting hairs.

After earning a stoppage over Byron Bloodworth in his UFC debut, Mike Easton’s next two fights went down to the wire - close, hard fought battles where the outcome was left up to the judges; the difference between victory and defeat a handful of punches thrown and landed in each round.

Against Jared Papazian and Ivan Menjivar, the 29-year-old bantamweight came away on the right side of the results, sending him into his fourth appearance on a three-fight winning streak. Originally scheduled to meet fellow up-and-comer TJ Dillashaw on FOX in Seattle, an injury forced the Team Alpha Male member out of the pairing, with Brazilian Raphael Assuncao stepping up to replace him.

Another fight. Another coin flip.

“The first round was pretty close, and he switched it all up on me in the second round,” said Easton, recalling the December bout that didn’t go his way. “(He) got me in a situation where I had to chase him down, and you don’t want to have to be in that situation. It makes for a boring fight. He played his game plan, and I learned a lot from it. It was a good experience for me.

“He caught me with a nice right hand right in the eye; it was an awesome shot that he caught me with. That messed my vision up, and that changes the fight. It wasn’t like it was a bad loss; he didn’t get no takedowns, I had some good strikes, but he out-countered me.”

The loss hit the brakes on Easton’s climb up the rankings in the 135-pound division, and sent the diminutive bundle of kinetic energy known as “The Hulk” back to the gym to figure out what went wrong, and make the necessary changes to prevent this stumble from being a prolonged fall.

For the most part, fighters are their own harshest critics, just like the rest of us, and Easton is no different. He’s gone over the fight with Assuncao in his head and on film, solo and with his coaches, looking to isolate the mistakes and missteps that turned his eight-fight winning streak into a thing of the past.

“Sometimes I need to calm down a little bit,” suggested Easton. “I felt I was a little too amped or too hyped; I could have slowed the pace down a little bit. I feel like if I didn’t chase him, and he had to keep coming to me, it would have been a totally different fight.

“We didn’t expect him to fight that way (either). In all his earlier fights, he came to bang, he came to rumble, and I guess he just changed up his style, which, you know, I guess was a smart game plan.”

In early April, Easton, his Alliance MMA teammates Ross Pearson and Phil De Fries, and their coaching staff will travel to Sweden to connect with another member of the squad, light heavyweight contender Alexander Gustafsson. On Saturday, April 6, the quartet will make up one half of the final four bouts on the main card of this year’s UFC event at the Ericsson Globe Arena.

Though he usually prepares at home in “The DMV,” the tri-state area made up of the District of Columbia, Maryland, and Virginia, this camp has been spent in San Diego with the team at Alliance, where Easton has been picking up pointers from another accomplished teammate.

“Being around Dominick Cruz – having him coaching me in sparring practice – it felt great because now I understand how he does what he does, and how he mixes it up, and that grows me up,” Easton explained about working with the currently sidelined UFC bantamweight champion.

“I have to use more of my skills, and not just being one-dimensional. I’m so good on the ground; a lot of people don’t know how good my jiu-jitsu is. They’ve seen how good my takedown defense is, but they haven’t seen me on the ground, and that’s one thing I definitely have to show the world. If I get it to the ground, and I can get a submission, I’m going to take that submission.

“It’s not always about the knockout, and that’s what I’ve learned from the last fight. I can’t be one-dimensional; I have to be a little more open to everything.

“We really worked on that - mixing my kicks with my boxing and my takedowns; mixing it up so that we can get the points that we need to keep the fight as close as possible so that opponents have to come in and fight me. When those opportunities come, the opportunity to get the knockout is definitely going to show itself because it puts them into a desperate situation, and that’s what we’re working on. It’s about being smarter.”

Like Easton, his opponent in Sweden, Brad Pickett, is coming off a frustrating loss that halted a winning streak. Three weeks after Easton lost to Assuncao in Seattle, Pickett stood toe-to-toe with Eddie Wineland, and came away on the wrong side of the results. While Wineland is now lined up to face Renan Barao for the interim bantamweight title, Pickett is astride Easton, looking to regroup and get back in the championship chase.

“This is our opportunity to show what the ‘35ers are about, especially the guys that like to fight,” Easton said of the pairing, which pits the fifth- and ninth-ranked fighters in the division against one another. “He’s a bigger name than Rafael Assuncao, and it’s just one of those matchups where (the UFC) knew it was going to be a good fight for the fans to see. It makes much more of an interesting fight.”

If things go the way Easton envisions, fight fans in Sweden will be treated to one of the year’s best battles on the first Saturday in April.

“I want this to be the fight that goes down as Fight of the Year.”