Jacob "Christmas" Volkmann looks to make it five wins in a row when he faces Efrain Escudero at UFC 141 on December 30th... 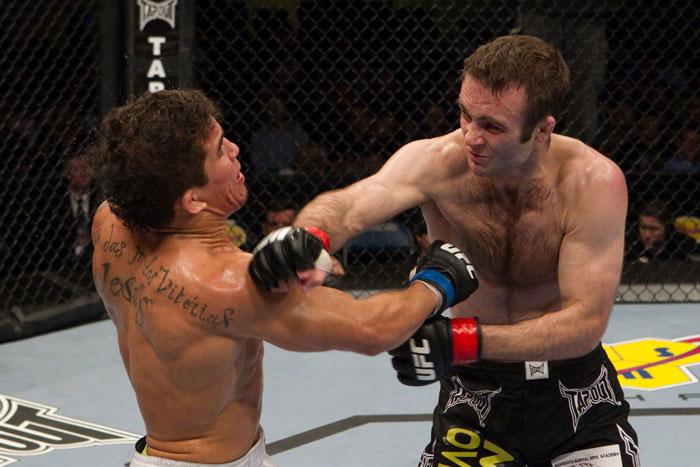 On New Year’s Day of this year at UFC 125, several fighters truly captivated fight fans with their memorable Octagon performances. Dustin Poirier introduced himself to the featherweight division with authority in his lopsided victory over Josh Grispi, Clay Guida surprised all with his second round guillotine choke over former PRIDE champion Takanori Gomi, Brian Stann legitimized his presence as a dangerous 185er with his TKO of Chris Leben, and, least of all, Frankie Edgar and Gray Maynard battled to a draw in one of the most unforgettable title fights in UFC history. Oddly enough, what gained national attention and headlines wasn’t what transpired in the cage, but an offhand comment said backstage.

The minor celebrity who emerged from UFC 125 was its first winner of that night: Jacob “Christmas” Volkmann. After a somewhat uninspiring split decision win over Antonio McKee, Volkmann was asked in an interview by MMAFighting.com’s Ariel Helwani, “who would he like to fight next?” Volkmann’s first answer was Clay Guida and his second was President Barack Obama. The following hyperbolic controversy and 15 minutes of fame for Volkmann obviously didn’t stem from calling out “The Carpenter”. The quick political soundbite was hugely popular on the internet, was featured on the Jay Leno show, got Volkmann a visit from the Secret Service and cost him his coaching job for White Bear Lake high school wrestling for two weeks.

As impressive as all that is, Volkmann’s most remarkable feat in 2011 was simply dominating Danny Castillo at UFC Live in August.

At the end of the day, nothing holds greater sway on a fighter’s career than whether they win or lose inside the Octagon. The three-time NCAA Division I All-American from the University of Minnesota took an up-and-coming lightweight talent who was on a three fight win streak and ran the tables on him for 15 minutes. It didn’t earn Volkmann any more time on late night talk shows, but it was another victory highlighting his imposing ground game. Also, it was arguably his best win in the UFC and one that Volkmann slightly predicted.

“I was fairly confident I was going to win because his strength is my strength,” states Volkmann. “He was a Junior College wrestler, which doesn't say much to be honest. I was confident going in there that I could take him down and ground and pound him. I tried to submit him, but that didn't work. That was the submission I was working on the whole camp leading up to the fight. I assumed I could get that on him. Even on the pre-fight interview, I said I could get a D'arce on him.”

For the majority of the three rounds, Castillo was underneath Volkmann and caught in a prolonged D’arce choke attempt. “I have watched the fight, but I don't know why it didn't work,” tells Volkmann, who is as baffled as the rest of us with Castillo’s ability to struggle and not tap to being in a tight choke for minutes at a time. “I couldn't submit him! He's a tough kid with a lot of grit for not tapping there. I could hear his neck cracking and everything.”

At 31 years old, the Minnesotan is 4-0 at 155 pounds in the UFC since dropping down from welterweight. Volkmann was thrown to the wolves in his first two fights inside the Octagon, facing and eventually losing to Paulo Thiago and Martin Kampmann. Volkmann attributes part of those losses to more or less the culture shock of not realizing what a step-up in competition it was from smaller organizations, where Volkmann was 9-0, to the UFC.

“It's just like wresting Division I wrestling,” asserts Volkmann. “You have to train twice a day at least. You have to have a coach coaching you and yelling at you every day because if you don't then you're not going to succeed. When you first start fighting in the UFC, it is kind of a shock because you don't realize how much better fighters the guys in the UFC are than in these other shows. These guys who are going 0-2 in their first two fights in the UFC, it’s is not a really good judgment of how good of a fighter they are because they are in shock. I don't think they are ready for it.”

The next challenge for “Christmas” will be on December 30th at UFC 141 against returning Ultimate Fighter season 8 winner Efrain Escudero. “I met him once down at a CFA show in Florida and I did not like him at all when I met him,” remembers Volkmann, who sprinkles very little Holiday cheer on his first impression of his 19-3 opponent. “He was just an arrogant little *$%^$. He was very cocky. Seems like the world revolves around him type.”

Like or dislike on a personal level, Volkmann is busy training per usual for this dangerous adversary with Greg Nelson’s team at the Minnesota Martial Arts Academy. Escudero’s record is heavy on submission victories (13 of 19), so obviously, Volkmann is preparing for the very probable ground battle with Escudero, but he has also been working extensively on improving his standup, which will help with him getting the fights to the ground.

“The thing about his strength is it is wrestling too, so I’m not as concerned about that,” says Volkmann. “My main goal is to try and stay standing because I want to open up my standup game. The key to fighting a guy like Efrain, it is going to be hard as hell to take this guy down, so I'm going to have to have a better standup game to set up for better takedowns. I want to work on opening my standup to transition to takedowns better. I spar twice a week. I work on my hands three or four times a week. I do big work with the coach doing kicks with the heavy bag and he's got me hitting all types of pads. In high school, I did boxing for three years, Golden Gloves boxing. I didn't do any Muay Thai or nothing. I had three fights in boxing. I fought the sheriff's kid.”

The most likely outcome in this scrap is these two trading submission attempts, and Volkmann has Escudero’s favorite techniques well scouted. “Efrain has a good front headlock and a good guillotine, so I've been working with Nik Lentz and a few other guys I work with to prevent the guillotine,” reveals Volkmann of what he expects from Escudero and offers up, like with the Castillo fight, a peek into his own playbook. “I've been working on a lot of kimuras, not so much armbars, and on top guillotines. I might go back to the D'arce. If he gives me that arm, I'm going for the D'arce.”

After four consecutive wins at lightweight, Volkmann’s stint thus far in the UFC has been a lot about learning how to compete and not whether he could compete. “The thing that I think is the biggest difference of when I fought Paulo and where I am today is knowing when to stay standing and when to take a guy down,” claims Volkmann, and now that he has acclimated himself to the level of his opposition's abilities, he is ready to take them on and win. “I'm not going to stay standing with a guy like Martin Kampmann again - who I hope to fight again. I'm not going to stay standing with that guy because he has a reach advantage, experience advantage and he's a counter fighter. The biggest thing is to know when to stay standing and when to shoot to take him down.”

At UFC 141, Volkmann looks to impose his strength and will on Escudero to continue his undeterred winning ways at 155 pounds. “My old teammates from college used to call it ‘Farmer's Strength,’” relates Volkmann, noting that back-to-back commanding performances inside the Octagon would send a sobering message to the lightweights that they have a new powerhouse amongst them. “I have two to three practices a day, so I don't have time to lift weights and get big muscles. I didn't lift very strong, but when I got a hold of them they felt it.”