A first look at EA Sports UFC, in stores today for the Xbox One and Playstation 4 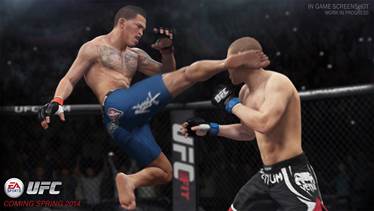 In the midst of all the excitement about the release of EA Sports UFC for the Xbox One and Playstation 4 today, I must first address a gripe to the game’s Ultimate Fighter coaches Dominick Cruz and Urijah Faber:

Did you have to pick me last?

I know I had no professional MMA experience and my win to get into the house could have been questionable, but last?

Well, guess who won TUF? Yeah, me. Of course I went on to lose my first post-TUF UFC fight, but that’s beside the point. You should have picked me higher.

Okay, with that out of the way, it’s on to the game, and the above rant should let you know immediately that EA Sports’ first foray into the world of the UFC (and on next gen consoles exclusively no less) is an immersive one. In Career Mode you feel the weight of each fight on your digital life. A win – by whatever means necessary – is the only thing on your mind, knowing that a loss can knock you out of the Ultimate Fighter competition or cripple your career. And once that career starts, a cumulative damage meter marks your progress, so win or lose, too many wars will shorten your time in the sport, and losses will affect your fan base and your ability to get sponsors.

It’s a tough fight game out there; glad I sit on the other side of the Octagon fence in the real world. In the digital one though, I have a complete array of fight techniques at my disposal; the only problem is doing well enough in the gym and in fights to get the points necessary to build my arsenal. It makes career mode a daunting and strategic process as you build the fighter you want to be. At the moment, one fight into my UFC career, I’ve got a nasty clinch game and solid takedowns, but my stand-up striking needs some work, especially defensively. Again, this is where the pressure of the fight comes in, and where the game really shines. Forget flashy moves or aesthetically pleasing performances; if you’re getting lit up on the feet, you will shoot for a takedown to catch your breath and get in a few ground strikes. But even there, your opponent will be constantly trying to either improve his position or get back to his feet, making it a fast-paced chess game that can get your palms sweaty as you try to keep pace. And if you happen to land that perfect strike and your opponent’s HUD lights up in red, the rush to finish is a rush because as UFC President Dana White says, “don’t leave it in the hands of the judges.”

So what about the mechanics of the game? I have one note of advice: don’t just run through the tutorial, but also play through the Challenges portion of the game. It will give you a greater awareness of what’s available for each fighter as well as get you up to speed on all the different maneuvers and combinations at your disposal. This is a deep game, so the more you know the more successful you will be. Button mashing isn’t really an option here, especially on the ground. And while EA has proven its ability to master the stand-up game with its Fight Night series (and it hasn’t slacked off here), the real test was going to be if they could do the same with the ground and clinch games, an issue with all previous MMA games.

The verdict? It’s clearly the best attempt yet, with clinch and ground battles truly represented as battles, with it possible for minutes to slip by on the clock just jockeying for position with your opponent on the mat or in close. Submissions are still tough to pull off, but at least in my experience, they’re possible and I’ve done it, unlike my struggles with past MMA games, where I am ashamed to admit that I never pulled off a sub. In EA Sports UFC, you use a method with the right and left sticks, and you have to be aware at all times both offensively and defensively during submission attempts, because a false move and it can be the difference between a tap and an escape. Again, running through the challenges and the tutorial is essential for success here. And while it’s difficult, there is nothing more satisfying than getting the tap out, and even if you don’t get a submission, it is possible to get a win with your groundwork, whether through ground control or strikes on the mat. That wasn’t always the case with MMA games, where frustration with the submission system led most to abandon it in favor of a strictly strike-based attack.

Stand-up wise, it may sound simple, but so many people forget the necessity of defense. And in the heat of the battle, you could forget to put your hands up and block or try to parry your opponent’s strikes. All of a sudden, your HUD is bright red and you’re looking for an exit. Guess what? Play through your challenges to figure out how to block those shots to the head as well as check those leg kicks. And yes, leg kicks can win fights, and while throwing those shots to the legs with Pat Barry against Mark Hunt, one of those subtle little details that this game excels in showed up, as Hunt actually switched stances after taking a series of shots to his lead leg. Body shots can devastate as well, with Alistair Overeem scoring a couple body shot knockouts with his kicks to the midsection.

But don’t think spectacular head kick or head punch knockouts aren’t around, because they are, with a number of different finishing animations sure to lead to some serious bragging rights when playing with friends.

The fighters also do what they’re supposed to do. Anthony Pettis has his flash, Ronda Rousey fishes for submissions, and Roy Nelson throws right hands from the cheap seats. It’s also possible to go the distance in this game, a struggle in past MMA releases. My first fight was a preview of the Rousey-Alexis Davis bout happening next month at UFC 175. Rousey won via fifth round TKO. I’ve also had some pitched battles that have gone to the scorecards, which was near impossible previously unless you took your foot off the gas pedal to go the distance. That doesn’t mean there aren’t flash knockouts, but it’s not a given that every fight will end in the first round. I would like to see the scorecards at the time of the stoppage though, and maybe this can be added in the future (hint, hint).

As far as other additions, in my opinion there are never enough fighters in the game, so while the current rosters are solid, I’d love to see more added. Thankfully, EA Sports has promised downloadable roster updates, so that end of things will be covered.

Last, but not least, and I’m sure you knew this already from seeing screenshots and gameplay videos, the graphics are truly next gen. Each fighter is intricately detailed, the animations are something to see, collision detection is spot on, and the complete UFC presentation is there, from Bruce Buffer and the Octagon Girls to Stitch Duran and Goldie and Rogan in the booth. Videos with encouragement from fighters and White also appear throughout career mode, and nothing made me feel better than hearing the UFC boss tell me after my first loss that Joe Silva probably wasn’t going to cut me.

Like I said, this is one immersive experience, one that has already resulted in a backlog of stories, two missed interview times, and the struggle to put the controller down and get back to work. But hey, no real fights this weekend, only on my console.