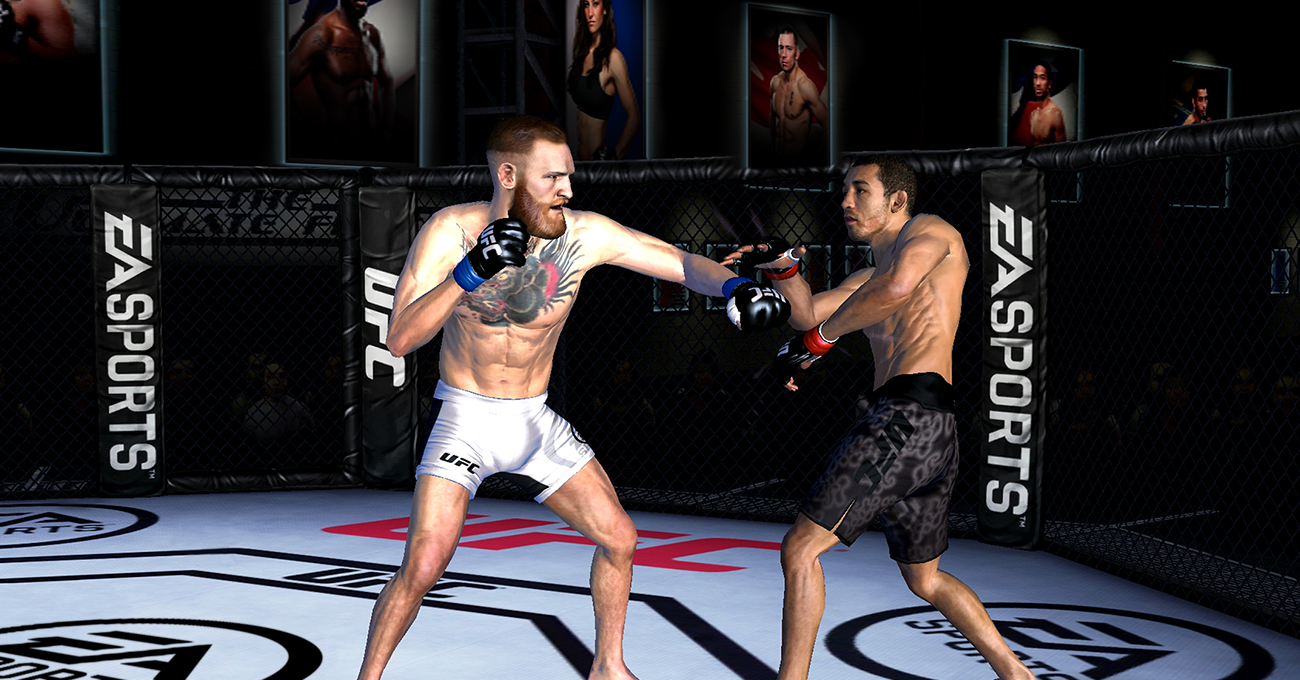 Warning: Don’t play the mobile version of EA Sports UFC if you’re on deadline or have something important to take care of. It’s that kind of game. Call it the potato chip syndrome. You can’t eat just one chip and you can’t have just one fight. That’s a good thing, well, as long as you don’t have the aforementioned deadlines or something important to do.

Confession: I normally hate mobile games. To me, they’ve always been half-hearted ports of console games or simple time wasters that grow boring fast. That’s not the case with EA Sports UFC, and while I work here in Octagon-land, if you download the game for your phone or tablet, I dare you to not – at the very least – admit that it’s one of the best mobile games you’ve seen.

So with one warning and one confession out of the way, I’ll get right to the point. Go get EA Sports UFC and play it. It’s free, and free is nice. Of course you can buy “Gold” to build up your fighter roster or buy extra moves or boosts, but I’ve been playing since its release last week and have had plenty of fun with it without reaching into my virtual pocket.

As you can guess, this is the mobile version of the hit Xbox One and Playstation 4 console game, and while that game tends to lean toward the side of simulating the sport of mixed martial arts, the mobile game is definitely on the arcade side. That doesn’t mean there’s no strategy involved, because you can’t simply tap away and win bouts, especially the deeper you go into the game.

Presented with a ladder-like system that sees you fight tougher and tougher foes as you build up your arsenal of moves and level up, the career mode of the game contains four weight classes (heavyweight, middleweight, lightweight and flyweight), so you will see fighters competing outside of their normal weight classes and there are no female fighters included. Win a certain amount of fights and you can open a box that contains new moves and new unlockable fighters, but after winning a bunch of fights you can fill out your career roster with someone for each division.

The graphics are as impressive you can get for a mobile game, with the high-def representations of the fighters making them instantly recognizable. Animations are top notch as well, and if you’re looking to sell someone on what you can do game wise with a mobile device or tablet, this is the game to show them.

As for the most important part of the game – the gameplay – this is where things really shine, and I write that because I had to wonder how do you fit so many different aspects of MMA on to a touch screen. I’ve tried playing console ports before and it either confused the heck out of me or wasn’t responsive enough. In EA Sports UFC, the gameplay is the star of the show. Using your fingers. You can tap quick for basic punches, swipe across for heavier blows, and swipe diagonally for real power shots. To block, you put two fingers on the screen, to dodge you swipe backward, and to create space you swipe back twice. It’s the most intuitive system in the world and that’s coming from a 46-year-old with slowing reflexes.

To begin, the only thing you can do is punch, but as you land shots, that’s when the special maneuvers come in. Kicks, knees, superman punches and takedowns will all come into play as you score with your punches, and if you land these “special” strikes they reduce your opponent’s health bar significantly the more these moves have been powered up by previous wins. If you get the opportunity to score a takedown, a little bar appears and you have to hit it at the perfect time to get your opponent on the mat. Once there, you can fire off ground strikes or get the opportunity to submit your foe, against with the little timing bar and then a meter that requires quick taps to get the tap.

Again, this is not a strict simulation, so if you see a Capoeira kick from someone who would never pull that off in real life, there’s no need to throw your phone out the window. Fights are scheduled for one round of two minutes each, and while I’ve only been to a decision a handful of times, it’s not a “button masher.” Unfortunately folks, you have to block sometimes. But that’s what makes this a fun fighting game. Add in the ability to keep building your fighter’s arsenal and you’re going to have a good time, especially when you can get Luke Rockhold’s head kick up to level 14 and he’s dropping opponents left and right.

Another cool part of the process is getting the occasional in game “email” that provides a boat load of extra moves and power-ups, and the ability to participate in “live” events like last week, when you could fight against UFC 186 headliner Demetrious Johnson for a limited time. This week there’s an EA community event that includes bouts against Gray Maynard, Eddie Wineland, Dennis Siver, Chan Sung Jung and Donald Cerrone, with wins adding more and more points toward limited unlockables.

Bottom line, this may be the best mobile sports game I’ve played, and while you might say “well, of course, he works for the UFC,” all I’ll respond with is “play it, and tell me if I’m wrong.” There’s a comments section below.