What a difference 21 months makes. The last time I checked in with the EA Sports gang for their first UFC video game release in 2014, Ultimate Fighter coaches Urijah Faber and Dominick Cruz saw fit to leave me on the sidelines until making the last pick.

In 2016, former UFC heavyweight champion Cain Velasquez picked me first after I won my fight to get into the TUF competition, and I rewarded his faith by winning the show.

So why the switch? Has EA Sports UFC 2, which was released today for the Xbox One and Playstation 4, gotten easier? Hardly. But after a lifetime of button mashing behind me, it took me a while to be weaned off that habit the first time around. This time, I took a more strategic and measured approach to the world of video game fighting, and it worked wonders.

And that’s the beauty of EA Sports UFC 2. If you’re 47 years old with dulled reflexes, you can still find a way to beat a fast-twitch enabled teenager by knowing your fighter, knowing the sport, and picking your spots.

To paraphrase Vince Lombardi, the fatigue system in this game will make cowards of us all. You can’t fire off 20-punch combinations without emptying your gas tank and forcing yourself to take a breather, making it important to pick your openings wisely with your strikes. There’s nothing like throwing everything at an opponent, hurting him, and then not having enough energy to finish him off. In this way, it’s more like a real fight. Yes, you can catch an opponent with the perfect shot early and end the fight seconds later, but in reality, you’re likely to be involved in longer wars of attrition if you and your opponent have a grip on defense and bobbing and weaving.

In addition, while it’s possible to have bouts that are completely stand-up in nature, the ground and clinch games have been amped up to such an extent this time around that not only can you engage in enjoyable exchanges on the mat, but you can have an entire bout there, trading transitions, submission attempts and ground-and-pound assaults. With the new HUD system, you can see the moves available to you and then try to implement them while your opponent tries to counter or defuse your attack. It’s not just easy to work, but it’s also educational, as you can see the particular moves that will or won’t work from a certain position. And I said it last time and will say it again, for my money, there is nothing in video games more satisfying than pulling off a submission. Is it easy? No. But it’s possible with practice, and that’s all you can ask for.

Practice is a big part of the game as well, and while that’s not as sexy as fighting in a main event with a championship on the line, if you run through the tutorials and challenge sections, it will make your likelihood of getting to those main events even easier. And unlike a lot of games of this sort, EA Sports UFC 2 rewards your efforts and allows you to show off your wares in several different game modes – many of which are new to the series. So maybe it’s better to call this piece a “review in progress,” as there’s so much to get to that one week just doesn’t cut it.

As a longtime sports sim player, I like the idea of being a general manager of sorts, making fights and watching as the league or promotion plays out. For the first time, EA Sports UFC 2 takes a stab at this with the “Custom Events” mode, which allows you to set up your own fight cards, put championships on the line and basically run your own universe. The completed cards are saved, so you can see past results and play Joe Silva or Sean Shelby to determine future matchups. I can only see this mode growing in future editions, but for now, it’s a welcome addition. 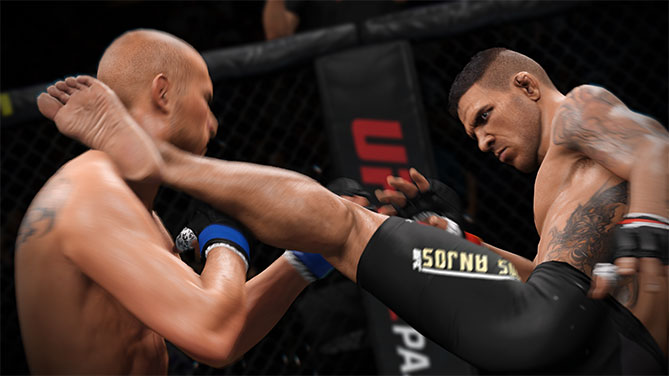 Another welcome addition to the series is the addictive “Knockout Mode.” Made for the button mashers of the world, there is no ground game in these fights, which are conducted much like traditional fighting games like Street Fighter. It’s the best two out of three (or three out of five), with adjustable life bars that will dwindle with each shot taken. And when the final blow is landed, the knockouts are save and share worthy. It’s a fun mode that will eat up plenty of time.

The heart of the game for most will be “Career Mode” though, and like the first edition of the game, it allows you to make your own character and take him or her to the height of the MMA world. Like the 2014 version, the damage meter is back, and I love the fact that a few wars may please the fans but shorten your longevity in the sport. In other words, defense isn’t something that goes around deyard. You’ve got to block and, if necessary, take the bout to the mat and win a decision. You also have to watch how you train, because a few hard sessions can leave you injured going into a pivotal bout. Then there are the unexpected occurrences, like your family coming in and causing a lost training session or a late notice fight that can shorten your camp. Each instance can leave you at less than a hundred percent and can affect the fight.

At the moment, I hold a 7-1 record, and that one loss came in a step up fight against Quinton “Rampage” Jackson. For that fight, I didn’t just have to win, but there were also specific requirements to hit to get the most bang for my buck. Hurt Rampage with leg kicks, land close to two dozen significant strikes, and then finish in the third. I landed the significant strikes, but fell short everywhere else, so now it’s back to the prelim card. 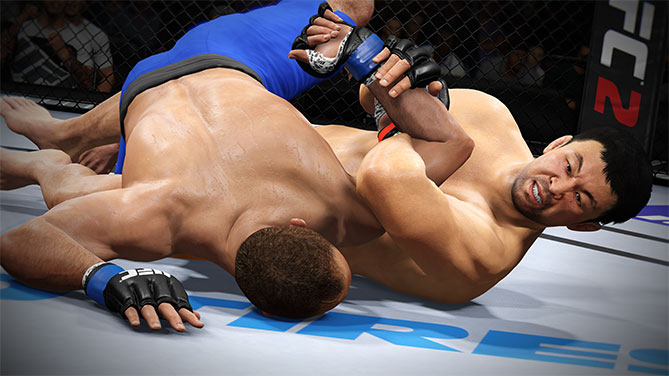 Eventually, you become invested in your created character, and you can amp that up five fold in the new “Ultimate Team Mode.” By creating up to five characters to populate your squad, you take your team into battle online, where you build up points to buy packs that include signature moves, training boosts, and fighter perks. Like Knockout Mode, this one can get addictive fast.

And that’s just with created fighters. As far as the game roster goes, EA has gone above and beyond the call of duty with over 250 fighters, ranging from legends like Chuck Liddell and Mark Coleman to a huge array of current stars, contenders and prospects. And while a few favorites may not be on the roster at the moment, EA has a robust DLC attack on the way, so expect any holes to be filled over the coming months. Graphically, you know the drill – it’s the most realistic depiction of MMA and its athletes ever, and that goes for all the peripherals as well.

Some of the game’s stars, like Ronda Rousey and Anderson Silva, even have their signature entrance music, and if you want to smile, just fight with Conor McGregor and hear the “ole, ole, ole” chant from the crowd, or with a Brazilian fighter and hear “Uh, vai morrer” ringing in your ears. It’s the little things sometimes, and EA nails them. They missed me at Octagonside, but maybe next year.

In the meantime, if you’re a gamer and a UFC fan, this is the one you’ve been waiting for.