Dana White’s Tuesday Night Contender Series has been the surprise hit of the summer, delivering a bevy of entertaining fights every Tuesday night from the jump, and somehow the combatants have managed to up the ante each successive week.

This week’s installment featured the first two-time competitor of the series as Charles Byrd returned to square off with Randall Wallace in the featured middleweight contest that closed out the show.

Despite getting a first-round finish in his first appearance, Byrd was the odd man out when Dana White handed out contracts, but he made the most of his second chance. While it took him until the second round this time, Byrd locked up another submission win and got the call to the UFC.

Joining the middleweight finisher in moving to the biggest stage in the sport is Grant Dawson, the featherweight prospect who has earned finishes in all 12 of his professional victories and delivered the most impressive performance of the night on Tuesday.

Here’s a look at what went down. 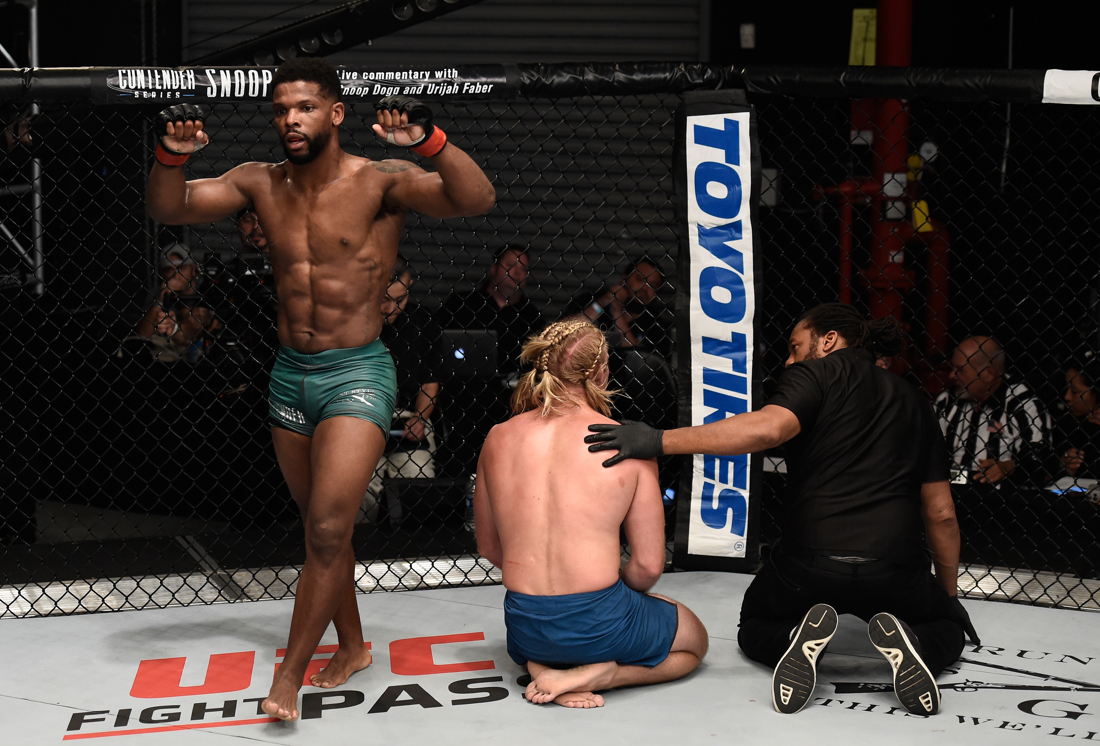 Byrd impressed in his first Contender Series appearance, collecting a first-round submission win over Jamie Pickett on Week 1, but wasn’t able to secure a contract. In order to make good on his second attempt, the Janjira Muay Thai product would need to get through Wallace, a seasoned regional vet who has shared the cage with UFC vets Marco Polo Reyes, Max Griffin and Roan Carneiro in the past.

Early on, it looked like Wallace was going to spoil Byrd’s return, taking the fight to the canvas and hunting for a rear naked choke, but “Kid Dynamite” escaped and went on the offensive, countering with a takedown of his own and finishing the frame in top position looking to score with ground-and-pound.

Out of the chute to start the second, Byrd pressed forward behind heavy hands, securing the clinch and taking the fight back to the floor with another takedown. After softening up Wallace with punches, he slid around to the back, wrapped his arm around Wallace’s chin and squeezed, collecting his second submission win on the Contenders Series and getting the contract he missed out on the first time around. 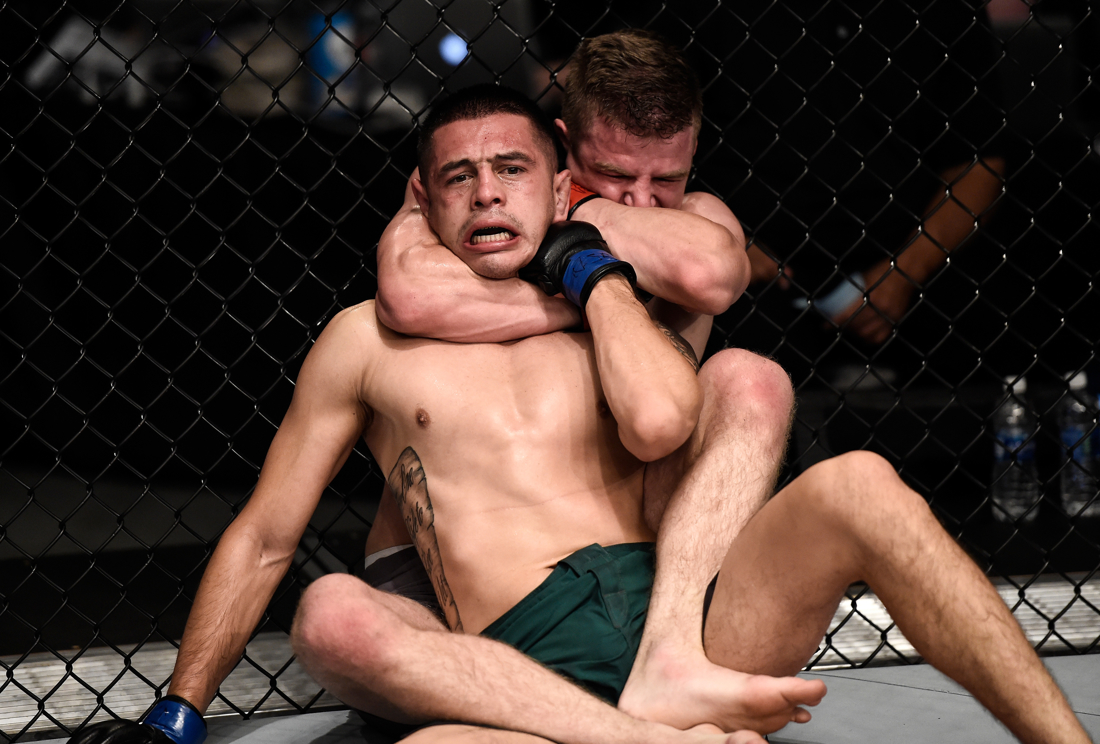 A pair of talented featherweight prospects connected in the second to last fight of the night, with the 23-year-old Dawson taking on Team Alpha Male’s Diaz in a battle of hopefuls with 11 wins on their resume.

Dawson, who trains at Glory MMA and Kickboxing with UFC vets James Krause, Zak Cummings and Tim Elliott, quickly took the fight to the canvas and put in work from top position, offering non-stop ground-and-pound. After punishing Diaz throughout the frame, Dawson nearly finished things in the final seconds of the fight, bombing on Diaz from back mount and lacing up a rear naked choke just a couple seconds too late to get the tap.

As soon as the second round began, Dawson charged across the cage, scooped Diaz up and dumped him on the canvas. The ground-and-pound opened up another opportunity to sink in the choke and, this time, Dawson was able to finish, squeezing out a tap from Diaz to secure the 12th stoppage victory of his career.

Whenever they were in space, Reed was able to find success, using his length and diverse striking arsenal to lump up Olson, but as soon as they came together in the clinch, the tables turned and the gritty Midwesterner Olson controlled things, landing strong knees and keeping Reed in uncomfortable, unfamiliar positions.

Early in the third, Olson resumed grinding, pinning the action against the cage before dumping Reed to the canvas once again. Even though Reed was able to quickly return to his feet, Olson never lost his grip around Reed’s waist, staying tight and staying out front as the seconds ticked off the clock.

The final horn sounded and the scores were turned in, all coming in favor of Olson, who pushes his record to 7-3 while handing Reed the first loss of his career. 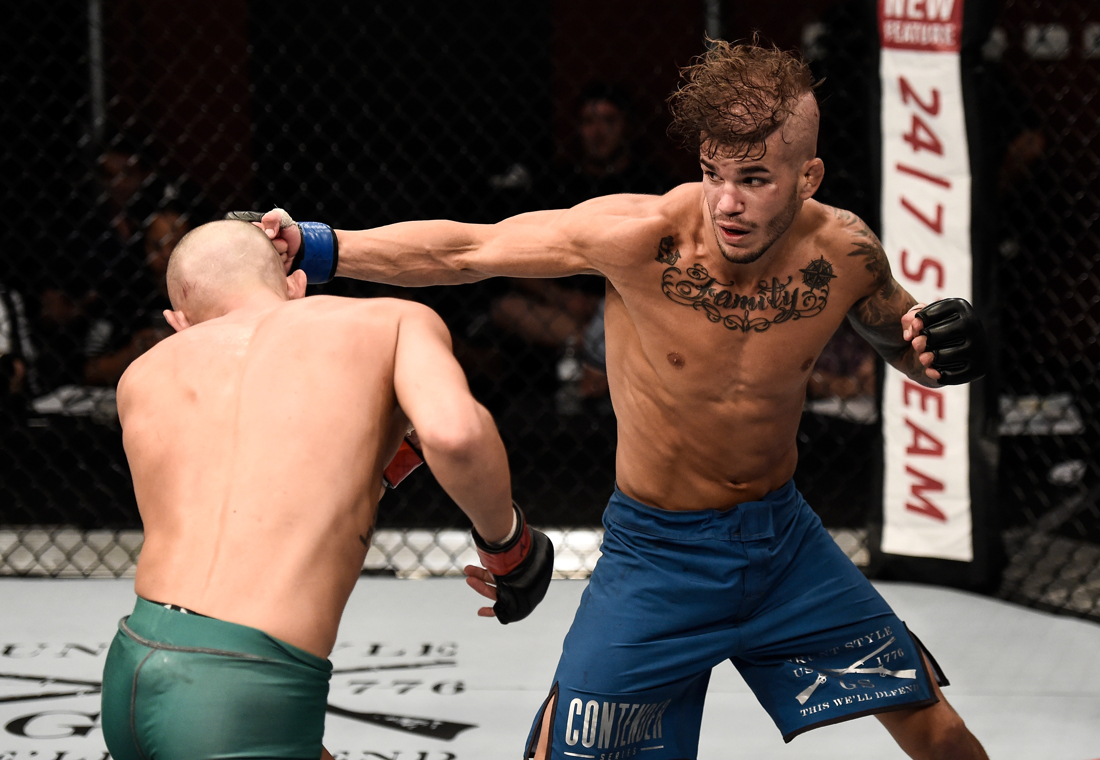 The second member of the TUF 24 cast to appear on the Contenders Series, Jaime Alvarez looked to capitalize on his second chance inside the Ultimate Fighter Gym as he squared off against tough Hawaiian Martin Day, a training partner of featherweight champ Max Holloway and the Gracie Technics contingent.

As has been the custom throughout the series, the flyweights brought it early in this one, with both men having success in the standup and doing work following successful takedowns in the final two minutes of the frame.

Right out of the chute in the second, Alvarez brought the fight to the floor, digging in his hooks and securing back mount, peppering Day with short punches as he tried to soften him up and find room to snake his arm under the chin to secure a choke. When Day attempted to scramble free, Alvarez stuck to him, pinning his back to the mat again and continuing to land shots and score points from top position.

With Alvarez fatigued and in full retreat mode in the third, Day found his rhythm on the feet and started piecing up the American Top Team product, crashing home body-head combinations while pressing forward looking for the finish. It didn’t come, but Day clearly dominated the final stanza, leaving the verdict unclear as the final horn sounded.

When the scores were tallied, Alvarez came out on top, salting away the first two frames and holding on down the stretch, much to the displeasure of the vocal Hawaiian contingent in the audience.

The ladies made their first appearance on the Contender Series with this strawweight scrap between Jamie Colleen and surging finisher Tiffany Masters.

After a feeling out process on the feet to begin the opening round, Masters ducked down for a takedown two minutes in and spent the remainder of the frame controlling the action in the clinch or on the ground. While she transitioned to back mount with 90 seconds before the horn, Masters wasn’t able to lace up a choke, but she clearly took the round.

When Colleen slipped along the fence in the opening minute of the second, Masters pounced, using the opportunity to take top position on the canvas and start connecting with punches and elbows. Though Colleen was able to weather the storm, she was on the business end of a lopsided round and entered the third in need of a finish.

In the final frame, it appeared that Masters was going to be able to grind out the victory from top position down the stretch, but out of nowhere, Colleen managed to find a submission. As Masters left her arms in from top position, Colleen was able to connect on a deep armbar, collecting a verbal tap as she readjusted and went belly-down in the final 20 seconds of the contest.

Official Result: Jamie Colleen def. Tiffany Masters by Submission (Armbar) at 4:43 of Round 3