The excitement and the intrigue on Dana White’s Tuesday Night Contenders Series was taken up a notch last week as all five bouts ended inside the distance with not one, but two of those contests being halted due to injuries sustained in the heat of competition.

In the end, Karl Roberson and Geoff Neal turned first-round stoppage wins into UFC contracts and this week, another crop of 10 hopefuls arrived in the TUF Gym looking to do the same.

Several fighters turned in impressive efforts and Dana White could have easily handed out four contracts, including potentially giving one to a fighter on the wrong side of the results for the first time. When the dust settled and the decisions were made, the UFC President once again awarded two contracts, graduating Julian Marquez and Brandon Davis from the regional circuit to the UFC roster.

Here’s a look back at what went down.

Once tabbed as a can’t-miss prospect, Hawes was expected to make an impact on Season 23 of The Ultimate Fighter, but ran into eventual winner Andrew Sanchez in the elimination round and was bounced from the competition before it ever really got started. He got his second opportunity to make an impression on the UFC brass Tuesday night in the featured bout, squaring off with Marquez, a gritty Syndicate MMA product intent on once again keeping the Jackson-Wink product from matriculating to the UFC roster.

The massive middleweight went hard over the first five minutes, with Hawes hitting an early takedown and transitioning to back mount, sinking his hooks and searching for a choke. But Marquez defended well and while Hawes was able to compete another takedown and land in top position, it was Marquez who was doing more damage, striking from the bottom. 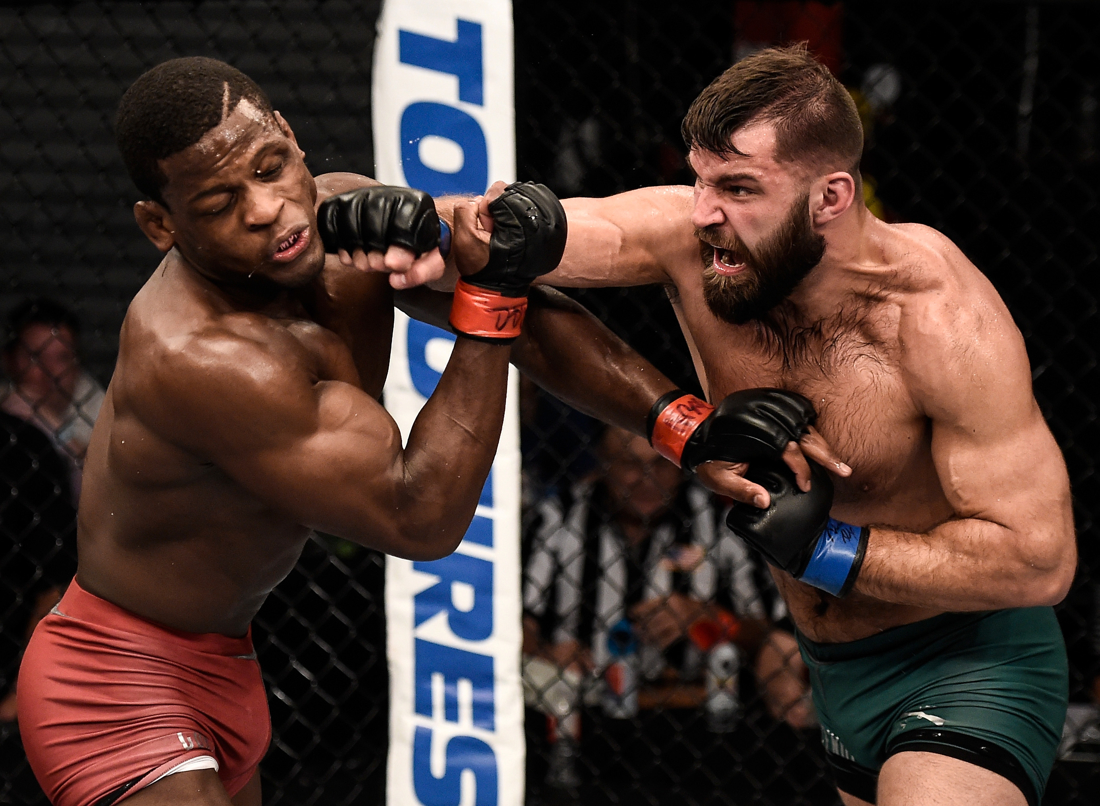 Right out of the chute to start the second, Marquez rocked Hawes with a series of big punches that put “Megatron” on shaky legs. While Hawes showed toughness surviving the initial onslaught, Marquez stayed on him and brought the fight to a close in spectacular fashion, blasting Hawes with a head kick that got Dana White and company out of their seats.

With the win, Marquez advances to 6-1 in his career and extends his winning streak to four, while Hawes falls to 4-2 overall.

Bantamweights locked up in the penultimate fight of the evening with Philadelphia’s Gray taking on Phillips, another 22-year-old upstart from The MMA Lab who looked to join his teammate Sean O’Malley in making an instant impression on the Contenders Series.

And that’s exactly what he did.

As Gray dove in and attacked a single leg, Phillips unleashed a series of “Hapa” elbows, the punishing strikes to the side of the head made famous in the Octagon by heavyweight Travis Browne. Phillips continued to bomb on Gray as he fell to his back looking to cover up and when “The Matrix” stepped back to reset, it was clear Gray was incapable of continuing and referee Chris Tognoni stepped in to wave off the action.

The biggest favorite on the fight card, Phillips showed why, picking up the second fastest finish of the season.

Official Result: Kyler Phillips defeats James Gray by Technical Knockout at 0:46 of Round 1

A pair of 6-0 prospects squared off in the middle of the card, as Connecticut’s Candelario squared off with TUF 24 alum Candido in a flyweight battled that looked like it was going to be over quickly, only to see tides shift and a drawn out war of attrition ensue.

Almost immediately, Candido got the fight to the ground and worked around to Candelario’s back, locking up a body triangle as he searched for a choke. But after defending well and turning into the Brazilian jiu-jitsu specialist, “The Cannon” gained control, punishing Candido with non-stop strikes and busting his nose before the end of the first.

The second round was a near mirror image of the first, with Candido again finding success with his grappling, but taking damage every time Candelario was able to spin free and gain top position.

In the third, Candido was again able to get a hold of Candelario and keep the fight on the ground, transitioning to mount and searching for a choke. As Candelario looked to create space and separate, Candido clamped onto an arm triangle choke that looked deep, but he wasn’t able to finish and the fight went the scorecards.

After tallying the tens and nines, the judges awarded the victory to Candelario, who moves to 7-0 with the win, while Candido suffers the first loss of his professional career. 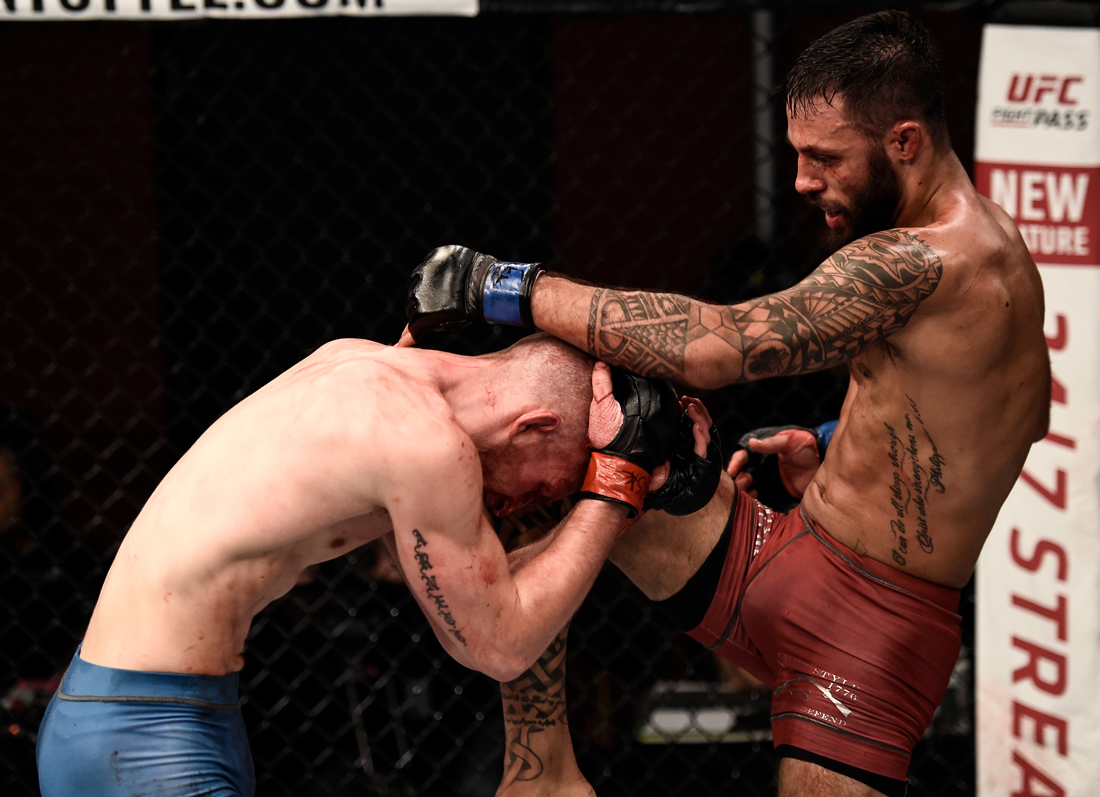 This lightweight pairing was a meeting between emerging talents keen on joining their long-time training partners on the UFC roster as Arnett works alongside former TUF winner Michael Chiesa at Sikjitsu in Spokane, Washington and Davis looks to follow Jason Knight from Mississippi to the Octagon.

The confident combatants spent the first five minutes slinging leather and talking junk, each man taking their turn getting the better of both the physical and verbal exchanges. While the talking ceased, the action did not, as the back-and-forth battled hit the canvas midway through the frame after Arnett jumped on a guillotine choke, only to have Davis shake him off and cut him with a vicious series of elbows from top position.

Arnett showed his toughness by surviving the onslaught and continuing to come forward despite being busted up and bleeding profusely, but Davis used the momentum he built in the middle stanza to pull away in the third, pouring on the pressure and throwing combinations through to the final bell.

With the victory, Davis pushed his winning streak to eight, while bringing Arnett’s 13-fight run of success to a halt with one of the most memorable performances of the season.

Tuesday’s action kicked off in the bantamweight division, with Cheyden Leialoha looking to be the third Hawaiian fighter to impress on the Contenders Series (and second to get a contract) taking on Minnesota Martial Arts Academy product John Castaneda, who carried an eight-fight winning streak capped by a second-round technical knockout win over UFC veteran Chris Beal into this one.

Leialoha started quickly, catching an early kick and turning it into a takedown, opening up cuts under the left eye and in the hairline of Castaneda with precise elbows and punches. In the second, Castaneda started to find his rhythm, mixing up his strikes more and stinging Leialoha with a smattering of punches before hitting a well-timed takedown, drawing level heading into the third.

Grappling exchanges dominated the final five minutes, with both fighters finding success. Just when it appeared that Leialoha was primed to control the bout on the canvas along the cage, Castaneda was able to reverse the position and go on the offensive, landing in back mount with the unbeaten Hawaiian flattened out in the final minute. While he didn’t get the finish, Castaneda’s second half effort in the third was enough to earn him the nod on Tuesday night and a ninth straight victory overall.