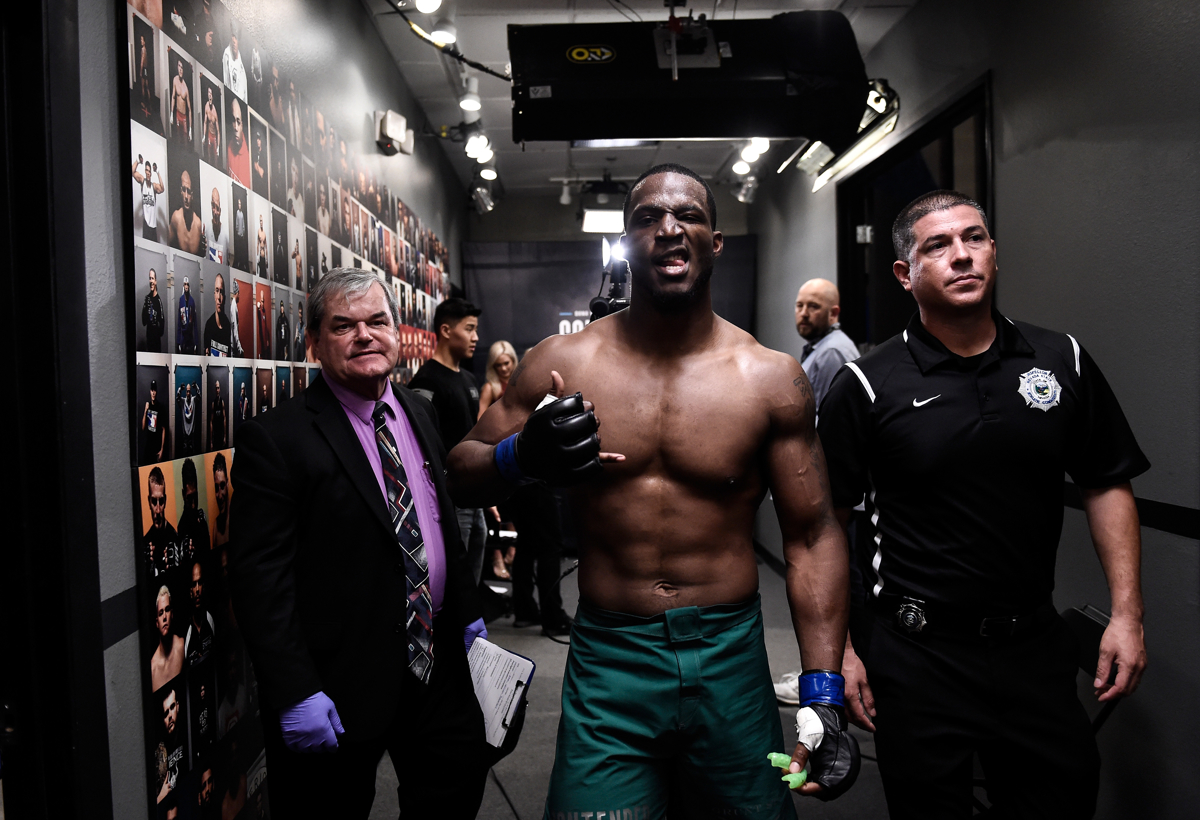 Over the first two weeks, the 10 fights on Dana White’s Tuesday Night Contender Series have produced six finishes and seen three fighters earn the opportunity to compete in the UFC.

Tuesday night’s action left UFC President Dana White and company with a difficult decision when it came to handing out promotions, as all five fights ended inside the distance, including a pair of unfortunate injury stoppages.

The third week of action wrapped up with the most impressive performance to date on the DWTNCS, as New Jersey-based kickboxer Karl Roberson laid waste to Ryan Spann with a series of short, heavy elbows to the side of the head as the submission specialist pursued the takedown along the fence.

Tuesday night, he made everyone in the TUF Gym stand up and take notice, including the UFC President, who awarded the now 5-0 prospect a UFC contract and a chance to join his teammates competing in the biggest stage in the sport.

Official Result: Karl Roberson defeats Ryan Spann by Knockout (Elbows) at 0:15 in Round 1

The first five minutes of this one were wide open, with Jackson having success in the clinch and Stewart showing his advantage on the feet. Late in the first round, the unbeaten Stewart dropped Jackson with a big right hand and as the Combat Club representative fell to the canvas, his left leg buckled under him awkwardly, similar to the way Mirko Cro Cop’s foot landed under him in his first bout with Gabriel Gonzaga.

Jackson fought through the remainder of the round, taking Stewart’s back late in the frame and he came out ready compete in the second. Unfortunately, as the two circled each other in the opening seconds of the round, Jackson’s ankle gave out on him, forcing the bout to be stopped.

Official Result: Kyle Stewart defeats Jason Jackson by TKO (Injury) at 0:21 of Round 2

Middleweights manned the swing bout on Tuesday’s card, with the Wisconsin-based veteran Waldon squaring off with Neal, a short-notice replacement from Texas who picked up a first-round technical knockout win 11 days ago.

And this one ended quickly.

After defending a takedown attempt along the cage at the outset of the fight, Neal spun into space and started letting go with his hands, piercing the guard with a couple clean jabs before dropping Waldon with a sharp left hook. As Waldon looked to cover up on the canvas, Neal picked his spots and poured it on, forcing referee Jason Herzog to step in and bring the bout to a close.

The quick turnaround, coupled with his sub-two-minute stoppage victory, impressed the UFC brass in attendance and earned the now 8-2 welterweight upstart a chance to test himself at the highest level later this year.

Official Result: Geoff Neal defeats Chase Waldon by TKO (Strikes) at 1:56 of Round 1

After running into dangerous up-and-comers Misha Cirkunov and Khalil Rountree in his first two Octagon appearances, Jolly stepped into this one looking to earn his way back to the biggest stage in the sport by halting Menifield’s unbeaten climb up the light heavyweight ladder.

The first round was a closely contested back-and-forth, with both men throwing heavy shots and battling to control the clinch. Neither was able to garner a clear advantage and late in the frame, Menifield connected with a right hand that left Jolly squinting and complaining to the referee about what he believed was an inadvertent eye poke.

Replays showed that it was a punch that connected and caused the damage, and when Jolly went back to his corner between rounds, he still couldn’t see clearly out of his left eye, bringing the fight to an unceremonious end.

The third week of action kicked off in the featherweight division as Gomez squared off with Ige.

This one was all Ige early as the 25-year-old Hawaiian put pressure on Gomez from the outset, earning a takedown and doing damage on the ground early before using his reach advantage to crack home clean shots that left his Cuban counterpart bloodied and standing on shaky legs.

While Ige started quickly again in the second, stinging Gomez on the feet, the Cuban did his best to shift the momentum into his favor midway through the round, completing a pair of takedowns and keeping the action on the canvas, where he was able to avoid further punishment and pile up time in a control position.

In the third, the difference in experience and poise between the two showed through, as Ige remained patient, steadily working behind his hands before turning Gomez’ desperate takedown attempt into a sweep attempt and back mount. From there, “The Danimal” softened up Gomez, laced his arm under the chin and collected the third-round submission victory.