This week's matchups feature a couple familiar names from past seasons of The Ultimate Fighter, including a light heavyweight who is responsible for one of the nastiest knockouts in the history of the reality show.

Plus, several veteran competitors and top prospects will be vying to make an impact as they look to land on the radar of the UFC brass.

With that said, let's take a look at the matchups for Week Two of Dana White's Tuesday Night Contender Series.

The light heavyweight main event features two hard-hitting fighters who will both undoubtedly be gunning for a knockout in this featured bout on Tuesday night.

Dan Spohn (15-6) may be best remembered for his stint on The Ultimate Fighter 19, when he made quite the debut with a vicious 10-second knockout over Tyler King to punch his ticket into the house. The moment Spohn laid out King in the opening seconds of the first round, UFC President Dana White called it "probably the nastiest" knockout he'd seen in the history of the reality show. Spohn made his way to the semifinals before having one lone fight in the Octagon, where he lost a unanimous decision to Patrick Walsh. Since that time, Spohn has put together an impressive 7-1 record outside the UFC. with four of those victories coming by way of knockout.

Meanwhile, Angel De Anda (18-5) is a veteran fighter from Modesto, California, where he trains alongside former UFC bantamweight title challenger Michael McDonald. De Anda is best known for his vicious punching power, as he's finished 14 of his 18 wins by way of knockout. De Anda has faced a laundry list of tough opponents on the regional scene and even managed to go three rounds with kickboxing legend Tyrone Spong. He has also put together a six-fight win streak going into this main event.

Given how Spohn and De Anda both love to look for the knockout, it's hard to imagine how this main event makes it to the judges' scorecards.

Undefeated flyweight prospect Casey Kenney (6-0-1) will look to keep his perfect record intact when he steps into the DWTNCS this week. Kenney fights out of Tucson, Arizona, where he's competed in several notable regional promotions, including Tachi Palace Fights and Legacy Fighting Alliance. Kenney comes from a wrestling and judo background, which has led to four submission finishes out of six professional wins.

CJ Hamilton (11-4) has the experience edge in this matchup against Kenney after spending the bulk of his career competing in promotions such as Titan FC and Legacy Fighting Alliance. Hamilton enters this fight off six wins in a row and one of his only losses came in a hard fought split decision to undefeated UFC prospect Jarred Brooks in 2015.

Sean O'Malley (7-0) has already put together a highlight reel through the early part of his career with five finishes in seven wins, including four by knockout. In Arizona, O'Malley works alongside a slew of top UFC fighters, including Bryan Barberena and fellow undefeated fighter Drakkar Klose. Most recently, O'Malley made quite a splash with a spectacular wheel kick knockout at Legacy Fighting Alliance in March before getting the call to compete in the contender series.

Alfred Khashakyan (8-3) will try to hand O'Malley his first career loss after coming up under Edmund Tarverdyan, who is best known as the head coach for former women's bantamweight champion Ronda Rousey. Last December, Khashakyan pulled off the most impressive win of his career when he finished former UFC and Ultimate Fighter competitor Chris Beal with a first-round TKO.

With both fighters capable of finishing this fight in a hurry, expect fireworks when O'Malley meets Khashakyan. 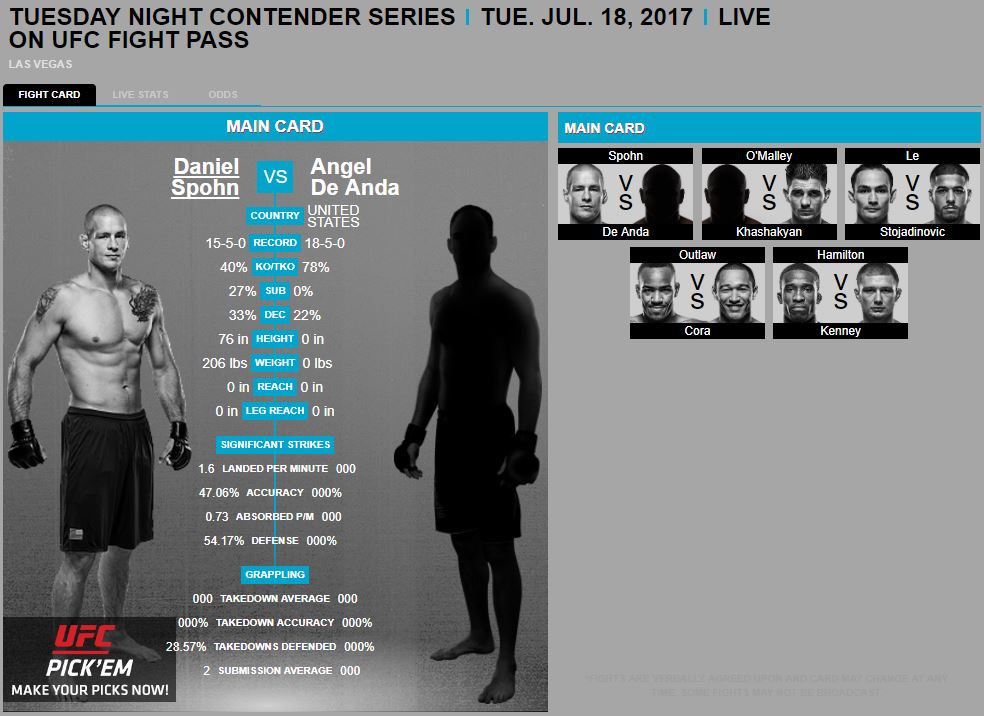 Following a run on The Ultimate Fighter season 22 under head coach Urijah Faber, Thahn Lee (6-1) will look to show off his growth since his time on the reality series when he steps back into familiar territory this week. Le made waves on the show as a very technical and creative striker who landed a jaw-rattling knockout during the elimination round to get into the house.

Le will try to make a similar impact this time around, but he'll have his hands full with Lazar Stojadinovic (12-5), who fights out of the famed American Top Team academy in Coconut Creek, Florida. Stojadinovic has won eight fights in a row, including a lopsided decision over veteran fighter Mike Richman in January, which earned him the look by the UFC in this showcase matchup.

Sidney Outlaw (8-4) is a name that just sounds made for mixed martial arts. The 25-year-old prospect trains under former Ultimate Fighter competitor Dante Rivera at his academy in New Jersey, and he recently put together a two-fight win streak. Outlaw has stayed very active throughout his career while competing in numerous promotions around the east coast, including several fights for Ring of Combat, which once served as home to UFC fighters such as Chris Weidman and Uriah Hall.

Michael Cora (4-1) may not have a name that stands out quite like Outlaw, but he definitely has a resume that earned him this opportunity. Cora is a “go big or go home” type of fighter who has earned his last four wins in a row by knockout. In his most recent fight, Cora absolutely demolished opponent Will Starks in the first round. That fight marked the third time in a row Cora has finished his opponent inside the first round, so don't blink when he faces Outlaw in the fight that will kick off the card on Tuesday night.