This week’s debut of Dana White’s Tuesday Night Contender Series on UFC FIGHT PASS features five fights that tell the audience exactly what kind of talent they can come to expect when they tune in this summer.

Each of the five bouts features either a promising regional talent looking to use this opportunity as a springboard to competing in the Octagon for the first time or an athlete who has already had a cup of coffee in the big leagues and is eager to show they’re ready for a more lengthy stay the second time around.

There are no guarantees heading into these contests either – this isn’t a “win and you’re in” situation where victory automatically punches your ticket to the UFC. This is a chance for these 10 competitors to stand out from the crowd of hopefuls competing each week around the country looking to collect enough victories or win in such devastating fashion that it catches the eye of the UFC brass.

This is a chance for each of these 10 competitors to show up and show out and it should be one hell of a show.

Here’s a look at this week’s matchups.

How’s this for a main event on the inaugural episode of Dana White’s Tuesday Night Contenders Series – a fight between a pair of champions from outstanding regional promotions, both of whom have extensive experience and established track records against very good competition.

Holobaugh is the Titan FC lightweight champion, having claimed the title in May with a fourth-round technical knockout victory of Gesias Cavalcante, a triumph that extended his winning streak to three. The 30-year-old Louisiana native dropped a decision to Pat Healy on short notice under the Strikeforce banner before suffering a submission defeat at the hands of Steven Siler in his lone Octagon appearance to date. But, since then, Holobaugh has posted an 8-2 mark with wins over veterans Eric Marriott and Lloyd Woodard, former UFC fighter Yosdenis Cedeno and current UFC lightweight Desmond Green.

A staple on the East Coast, Connecticut’s Bessette is the CES MMA featherweight champion, claiming the title in August 2016 and collecting a pair of successful title defenses over Kevin Croom and Rey Trujillo to give him seven straight victories heading into this one, all coming by way of stoppage. The 32-year-old appears to be in a groove and hopes to carry that over into his showdown with Holobaugh on Tuesday night.
START YOUR 7-DAY UFC FIGHT PASS FREE TRIAL | CHECK OUT THE DWTNCS FIGHT CARD HERE

Like Bessette, Rebello is an East Coast standout that has made a name for himself under the CES MMA banner. A native of Rhode Island and a Team Sityodtong representative, Rebello is 6-1 over his last seven fights with his lone setback coming in a champion clash with Ashley Gooch.

Anyanwu has been plying his trade a little further down the coast from his opponent on Tuesday night, putting in work and winning the heavyweight title with Cage Fighting Fury Championships, the New Jersey-based promotion that has graduated a host of talent to the UFC, including Jim Miller, Aljamain Sterling and more recently Jared “Flash” Gordon, who picked up a second-round stoppage win in his debut in Oklahoma City.

Both are on tidy winning streaks and have a penchant for putting their opponents away. With White looking on and talented heavyweights always in short supply, this is a tremendous chance for both Rebello and Anyanwu to make an impression and potentially earn a chance to compete in the Octagon in the not too distant future.

Bantamweight has become one of the most competitive and consistently entertaining divisions in the UFC over the last few years. The same has held true on the regional circuit as well, and these are two of the division’s finest representatives of that.

An unbeaten fighter with tremendous height for the division, Turcios enters with eight straight victories as a professional after collecting four wins as an amateur. Originally from Houston, the 24-year-old prospect now resides in Sacramento and trains with the elite crew at Team Alpha Male.

Though he no longer carries a perfect record, Salmon still carries a ton of hype as the Waianae, Hawaii native earned five straight victories in RFA (Resurrection Fighting Alliance) before coming out on the wrong side of a split decision result in his last appearance. With four stoppage victories and a burning desire to get back in the win column while making a stellar first impression, don’t be surprised if “Boom Boom” comes out guns blazing in this one. 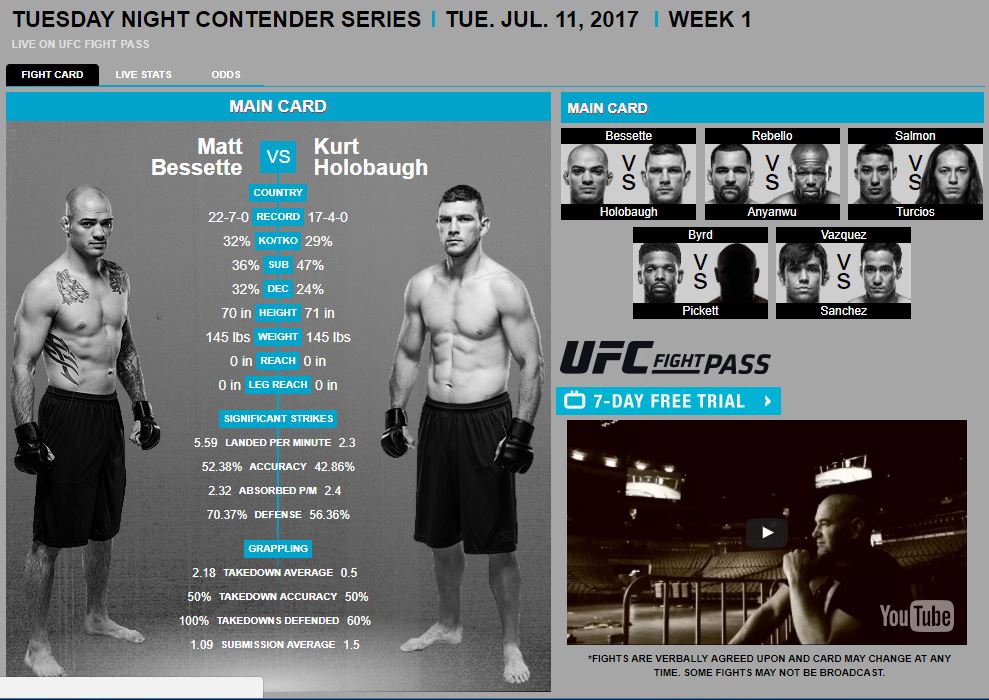 The Dallas-based middleweight was originally scheduled to face Justin Jones, but the two-time Octagon entrant was forced to withdraw, opening the door for North Carolina’s Pickett.

A pro since 2011, Pickett stumbled out of the gate, dropping two of his first three appearances, but instead of getting discouraged, he got extra motivated and continued to press on. In his six fights since, he’s gone a perfect 6-0 with five stoppages. After missing out on a couple opportunities earlier in the year due to circumstances out of his control, Pickett now gets the chance to make a first impression in this short notice opportunity of a lifetime.

An exciting clash in the flyweight division will get the action started on Tuesday night as Sanchez looks to earn a second opportunity to compete on the biggest stage in the sport while Vazquez aims to prove he deserves to test himself against the best collection of 125-pound competitors in the world.

Six straight wins capped by a second-round stoppage victory over grizzled vet Antonio Banuelos earned Sanchez a late-notice call to the Octagon against Wilson Reis in August 2014. After battling hard but coming up short against the eventual title challenger, Sanchez collected a split decision win over Tateki Matsuda, but was released by the promotion following a knockout loss to Geane Herrera at the close of 2015. With a pair of victories in as many fights since his last Octagon appearance, the now 26-year-old Team Jackson Wink product hopes to make the most of his second chance to make a lasting impression on Dana White and company.

Though he’s just 23 and has been a professional for less than four years, Vazquez has already established himself as one of the top flyweight prospects in North America, amassing an 11-2 record that includes a first-round submission win over current UFC bantamweight Ricardo Ramos. After failing in his bid to claim the Legacy Fighting Alliance bantamweight title a year ago, Vazquez has rebounded with consecutive victories and aims to keep that streak rolling as he steps in against Sanchez.