The second half of Season 3 of Dana White’s Contender Series kicked off on Tuesday as five more pairs of hopefuls headed into the Octagon hoping to impress the UFC President and matchmakers Sean Shelby and Mick Maynard.

Through the opening five weeks of this season, 16 athletes from seven divisions have earned contracts, including four middleweights, three bantamweights and two fighters in each of the heavyweight, light heavyweight, lightweight and featherweight divisions; the remaining competitor came from the welterweight ranks.

Tuesday’s matchups covered a wide swath of weight classes, beginning in the heavyweight ranks and culminating with a matchup between undefeated light heavyweights Aleksa Camur and Fabio Cherant, with a welterweight bout, a women’s flyweight bout and a featherweight contest in between.

Four more athletes graduated to the UFC on Tuesday night, as heavyweight Rodrigo Nascimento, light heavyweight Aleksa Camur, featherweight Aalon Cruz and flyweight Tracy Cortez all impressed the brass with their efforts, earning an opportunity to compete in the Octagon.

Here’s a look what transpired on Week 6 of Dana White’s Contender Series.

Even though he hadn’t stepped into the cage since October 2017, Nascimento showed no signs of rust or regression, strolling into the Octagon and securing a first-round submission win.

Early in the contest, the heavyweights traded low kicks and jabs as they both looked to establish their range and feel the other man out. After clinching up along the cage, Martinek looked for a body lock takedown but didn’t have the muscle to toss Nascimento to the mat, with the Brazilian landing in top position. From there, it was academic.

Following a handful of short shots and positional advances, Nascimento threatened to move to mount, but instead used the opportunity to lock up an arm triangle choke, quickly slipping off to the side, going knee on belly and securing the tap to wrap up an impressive showing to kick off Week 6 inside the UFC Apex. 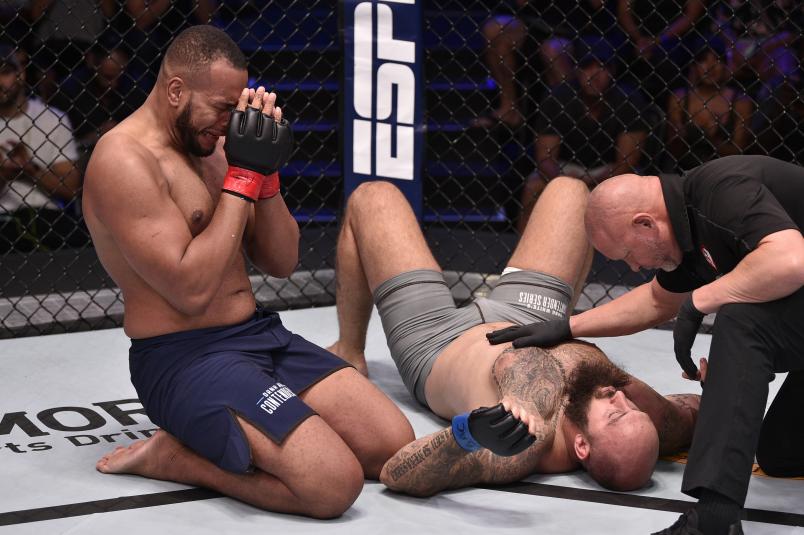 This welterweight contest was a battle at range for the most part, with Rodriguez working to get inside Farrington’s considerable reach.

Through the first two rounds, Rodriguez was the aggressor, hunting for big left hands and mixing in low kicks as Farrington countered with single shots from range. Late in each stanza, the Californian crashed forward to hit relatively easy takedowns, though he wasn’t able to do much with them given the short time.

Both came out more aggressive in the third, but again it was Rodriguez showing the more diverse game. Just when it felt like Farrington was starting to build some momentum with his striking, seemingly hurting Rodriguez with a left hand to the body, “D-Rod” dipped and put him on the canvas, finishing the fight in mount, reigning down blows.

It wasn’t the most exciting contest of the season, but it was a solid effort from Rodriguez, who rightfully took home a unanimous decision win. 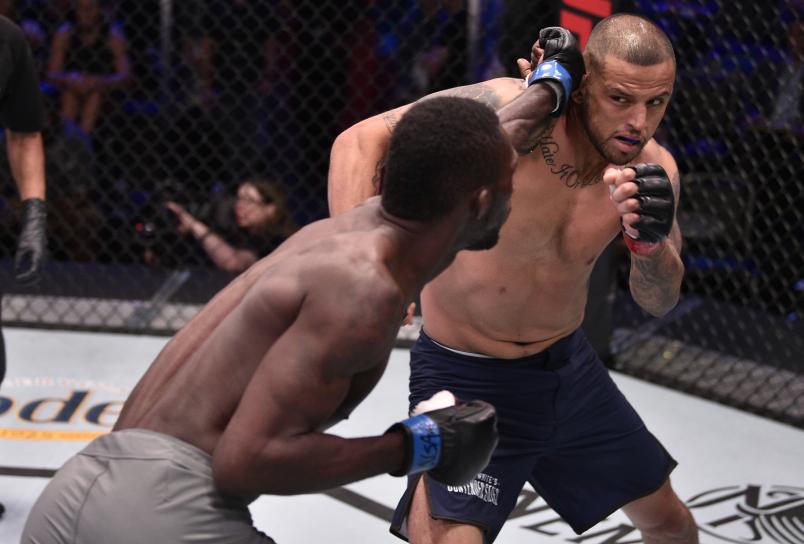 Cortez’ superior grappling skills proved to be the difference in this one, as the Fight Ready representative was able to take the fight to the floor at will and dominate Agapova on the canvas throughout.

Early in the bout, Agapova used her length and quick hands to get the better of the striking exchanges, connecting flush with a smattering of straight left hands that got Cortez’ attention. Those shots seemed to make the streaking American alter her approach, as she quickly opted to drag the fight to the ground.

Over the final half of the opening round and the whole of the second, Cortez controlled the action on the mat, taking Agapova’s back and threatening with submissions throughout. While she wasn’t able to lace anything up, she clearly dominated the action, showcasing her ability to control the fight.

It was more of the same in the third, as Cortez quickly pressed forward for a takedown again, initially getting stuffed, but showing a good ability to chain together attempts and progress through positions until once again landing on Agapova’s back. Though Agapova reversed to top position, got to her feet and let her hands fly over the final minute, it was a case of too little, too late for the promising 22-year-old. 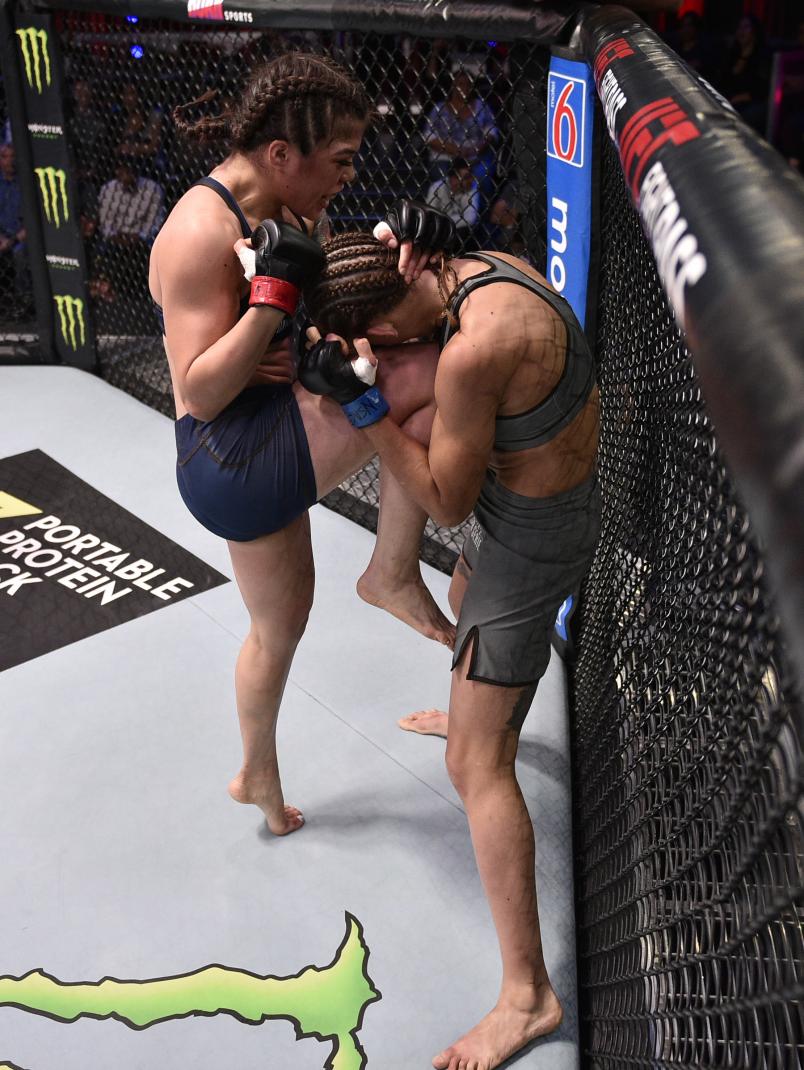 For 14-and-a-half minutes, this was a fast-paced affair, the kind of back-and-forth fight that looked destined to come down to how the judges valued volume, damage, and forward pressure.

In each round, Nguyen was the man moving forward, attempting to walk down Cruz and find a home for power strikes, throwing and landing at the higher clip. But in each round, it was Cruz who landed the more telling blows, using an assortment of kicks to keep Nguyen at bay, connecting with shots to all levels.

But with just a handful of seconds left in the contest, Cruz connected with a jumping knee that put Nguyen out in a flash. He’d landed a similar knee midway through the second and Nguyen ate it without issue, but this one sent him crashing to the canvas, giving Cruz the impressive walk-off win.

Social Post
Aleksa Camur def. Fabio Cherant by TKO (strikes) at 0:48 of Round 2

The first five minutes of this clash between unbeaten light heavyweight hopefuls were relatively uneventful, as Camur tried to corral Cherant, attacking with a handful of low kicks and the odd punch, never connecting with anything too serious.

Both men came out more aggressive in the second, and after Cherant stung Camur with a left hand that had the Strong Style Fight Team member backing up, Camur went airborne, connecting with a flying knee that left Cherant stumbling backwards. From there, the 23-year-old Ohio native swarmed, unloading a barrage of lefts and rights on the ground as Cherant covered up, prompting referee Chris Tognoni to step in and stop the fight. 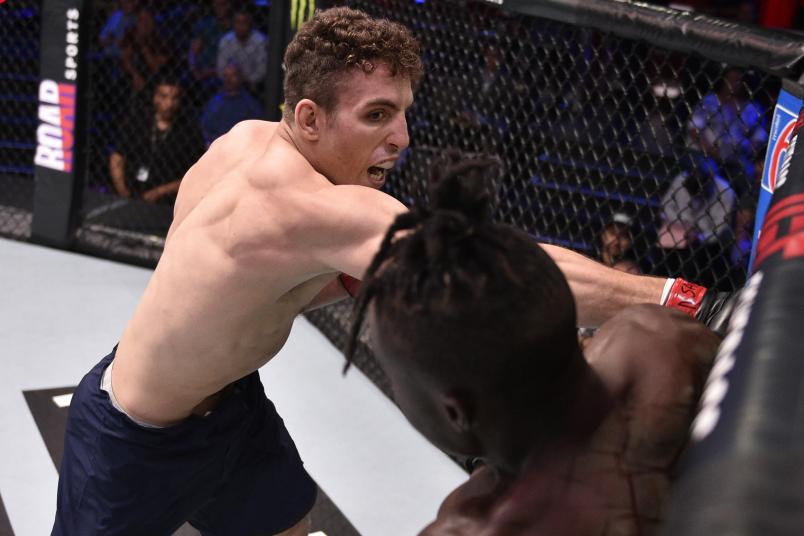