Check out the full interview from Dwayne “The Rock” Johnson cover feature in the August/September issue of UFC: The Official Magazine. Click here to subscribe. 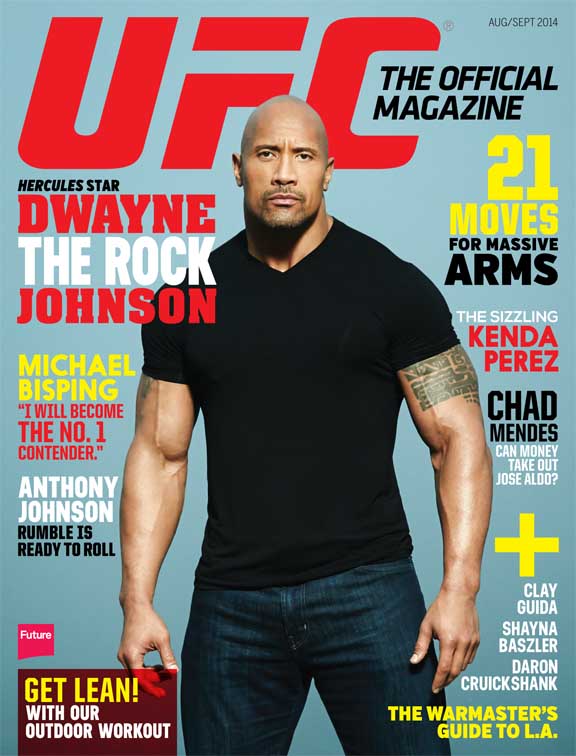 For the past two decades, Dwayne “The Rock” Johnson has transformed himself in every sense of the word. He morphed from Canadian Football League castoff into one of the most popular professional wrestlers of all time, and then into the most bankable star in Hollywood. Along the way, he has matched his career gains in sheer physical size. As a teen growing up in Hawaii, Johnson fell in love with the weight room. His singular talents as an entertainer are unequivocal, but he owes no small part of his success to his dedication to the iron. Seeing Johnson on the silver screen, it’s easy to overlook the sacrifice and work he puts in every day. To prepare for the lead role in Hercules (in theaters July 25), Johnson put himself through a six-month training camp to physically embody the legendary demigod. Here “The Rock” talks up his new role, his longtime fandom of the UFC, Ronda Rousey versus Gina Carano, who he thinks will hold the light heavyweight belt in 2015 (it’s not Jon Jones), and more.

UFC Magazine: The source material for Hercules—the graphic novel Hercules: The Thracian Wars—is all kinds of grim, which actually lines up with the Greek myths. Did that increase your interest in the part?
Dwayne Johnson: Absolutely! The graphic novel was a very cool, dark source of material that provided a smart, badass platform to write a script. The screenplay came, I read it, loved it and said we can make an epic movie with this. Hopefully, we did.

Bodybuilding has always been close to your heart. Which bodybuilder-turned-actor’s portrayal of Hercules struck you the most?
The man who always stood out most and inspired me when it came to Hercules was Steve Reeves. Dude was a stud and had the type of physique that was damn near flawless. He delivered a truly iconic Hercules character. He passed away in 2000. But, man, what a Hollywood legend.

Going into the film, did you have a clear idea of how you would put your personal stamp on the role?
Once I committed to the role, I approached it as if this was the very last shot anyone was ever going to have to play the character, so I wanted to create the defining version of Hercules: create a look that I could transform and disappear into, a physique where my muscles looked grainy, cut and scarred up. And, amidst the darkness, to still find room for some humor and “Hercules charm.” You’d be surprised how charming Hercules can be while bashing in someone’s head with his club.

Your home state of Hawaii has produced a steady stream of UFC talent. What is it about the Aloha State that produces so many guys who are willing to scrap?
Scrappin’ is just in the blood. In Hawaii, you eat, drink, play ukulele, have jam sessions, scrap, hug it out and do it all over again. I’m very proud of all the local boys who took that next step to hone their skills, work their asses off and become true mixed martial artists.

What fight or particular moment drew you into mixed marital arts? Was it Brock Lesnar, or were you a fan before he made his Octagon debut?
I was always a fan of the UFC, dating back to UFC 1 in ’93. But what actually drew me to MMA was when I attended UFC 60, when Matt Hughes faced Royce Gracie in a non-title catchweight fight. I was interested in MMA at that time, so I went to the Staples Center early and sat in the front row to watch every fight that night— including all the prelims. I wanted to absorb as much I could and become somewhat of a student for the night. When the main event was about to start, they sat the Gracie family next to me. Specifically Helio Gracie—his energy and presence was powerful. I’ll never forget shaking his hand. Royce lost, but even in defeat, the grace, pride and poise he and the Gracie family showed that night was inspiring. I went home that night with such a greater respect for the sport and all its fighters.

Are there any particular fighters you currently follow?
I always have my eyes on the champions, specifically the heavyweight and light heavyweight champs. Cain Velasquez is an animal with the type of heart and conditioning that makes me want to run through a wall at 3 a.m. and do my cardio and training. My buddy Jon Jones is a very special fighter who bridges fighting and artistry like no one ever before has. They’re both incredibly inspiring champions who are needle movers in the world of MMA. And I bet 2015 will be the year of Anthony “Rumble” Johnson: a bad dude. When he becomes champion, I’m gonna have to claim him as my cousin! [Laughs]

What’s the most surprising thing you learned about Ronda Rousey while filming Fast & Furious 7?
Ronda is one of a kind. She’s a champion with world-class drive and work ethic. And to be able to do what she’s doing—the drive of being a champion and then balancing that with the drive of being equally as good on the big screen—that type of ambition requires capacity, and it’s so cool to see her achieve and move mountains.

Gina Carano, who made F&F 6 with you, is possibly coming out of retirement. If she meets Rousey in the Octagon, who are you taking?
Come on, man, you can’t ask me that. That’s like asking me, “Hey, Rock, which side of your handsome face do you like better, left or right?” Obviously, it’s impossible to answer. You see what I did there? Avoided that question like the Filipino clap and managed to drop a “handsome” line in.

Well played, sir. What advice if any did you give Brock Lesnar before he transitioned to MMA?
I never spoke to Brock when he decided to compete in MMA. We’ve been good buds for years, and he always knew I supported his decision. To be able to accomplish what he did and become UFC heavyweight champion in that short amount of time was insane—historic.

Without giving away too much, what made you reach out to Dana White to participate in your show Wake Up Call?
On that episode of Wake Up Call, we have an 18-year-old high-school dropout who has one dream: to become a UFC champion. Despite the fact that his mom is in prison and he dropped out of school, he’s a good kid with a big heart and a dream. I told him if he meets me halfway and puts in the hard work, then I’ll provide the tools he needs to achieve his dream. I called Dana to see if he’d come down to Florida and take a look at this kid and see if he had any potential. I knew I could count on Dana to give it to me and the kid straight without any bullshit. Not only did Dana fly all the way to Florida, but he brought Mike Dolce with him. They put that kid through the ringer with training, conditioning and a shot to become part of Coach Libo’s [Ricardo Liborio] American Top Team up the road from where we live. I won’t give it away, but let’s just say that we may see that kid, Terrell Moore, in the Octagon one day. I can’t thank Dana and the UFC enough for their support of Wake Up Call.
You’ve got Wake Up Call, you do work with the Make-A-Wish Foundation and you use social media to speak up for the young women kidnapped by Boko Haram. What’s the source of your philanthropic streak?
Well, to be honest, it’s not so much a philanthropic streak, but more of a philanthropic spirit. I just want to give back when I can. I enjoy it. It may sound corny, but it’s the best part of fame.
As a country-music fan, what artist is powering your early-morning iron-slinging sessions, George Strait?
Ha, when I sling that iron before dawn, I respectfully am not listening to King George Strait, but I am listening to Merle Haggard. “Misery and Gin” is where it’s at.
As an actor, what’s the main difference between the guy who wrapped the role of Hercules and the guy who stepped onto the set of The Scorpion King for the first time?
Fourteen years of filmmaking experience and years of trying not to trip while running after bad guys.
Do you ever hear a voice in the back of your head whispering that you should give MMA a shot?
I used to hear that voice a few years back, then I remembered I don’t like getting punched in the face. Kidding aside, I have boundless respect for MMA and the discipline it takes to become a champion. The best way I can honor the warriors is through my support.