"I’m gonna be here for a while, so let’s make this a marathon and not a sprint. In the next couple years, they’re gonna know that I belong up there from beating the best guys." - Dustin Poirier 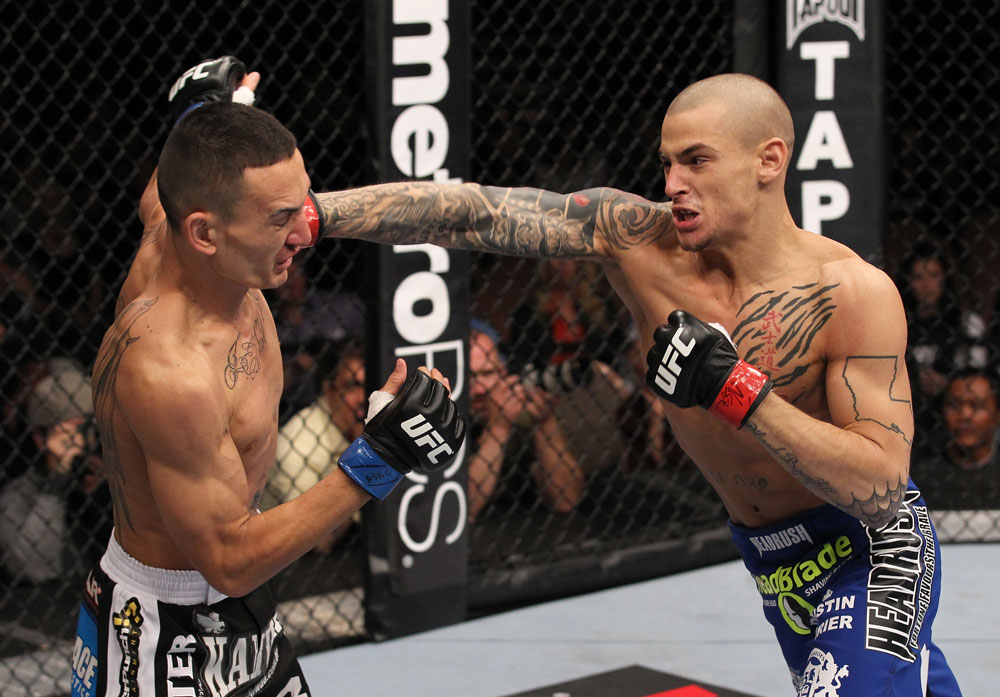 It’s been over two years between main events for Dustin Poirier, who takes the headlining spot tomorrow night for a bout against fellow featherweight contender Chan Sung Jung on the UFC on FUEL TV card in Fairfax, Virginia. That’s almost a lifetime for him in a fighting sense, as he’s gone from local hero to a young man on the verge of stardom in those short 26 months.

“It was at a big venue, and people were talking about it, there were all the flyers with our faces on it, and it was exciting,” said Poirier. “I also remember waiting in the damn locker room all night waiting to fight.”

He laughs, recalling the good memories that culminated in a submission win over Krantz at 3:35 of the second round. After one more win, Poirier got called to the WEC to begin the journey that has taken him to Fairfax. The way he sees it, everything began for him that night in Lafayette, and everything will go to another higher level after Tuesday night.

“People knew who I was around here, but after that fight people really knew who I was,” he said. “And I think it’s the same thing with this fight. It’s gonna be all eyes on us, we’re gonna be on the poster and every time somebody mentions the event, they’re gonna think about the main event. So even if you’re talking about (Donald) Cerrone and how awesome that fight with (Jeremy) Stephens is gonna be, you still know that I’m headlining the fight, so that’s awesome.”

It’s a well-deserved slot for both Poirier and Jung, fighters who have paid their dues and given their all when it’s their time to compete. Jung is coming off a 2011 Submission of the Year candidate against Leonard Garcia and a 2011 Knockout of the Year candidate against Mark Hominick. Poirier has won five straight and has never lost in the UFC, beating Josh Grispi, Jason Young, Pablo Garza, and Max Holloway in the Octagon. So when Poirier finished submitting Holloway in February, the first name out of his mouth was that of Jung.

“I think it’s a big step forward in competition, and he just knocked out Mark Hominick in seven seconds when Hominick was coming off a title fight,” said Poirier. “So he’s in the spotlight, he’s got a lot of fans, and I want to take that. I want to keep growing and I knew it would be a high-profile fight if we got it. I knew it would get a lot of hype and I knew it would be a good test, and I know it’s a fight that’s gonna push me. I learn a lot about myself in fights, and this might be one where I can get bloodied up and have to dig out of the trenches, and I look forward to that.”

It’s the tone of a grizzled veteran, making it hard to believe that the Louisianan is just 23. But he has an old soul and an outlook on life that few of his peers share. When he says he lives for the fight game, he means it literally, and though he is married and close with his friends and family, he knows that there are sacrifices to be made if he’s going to make it in this unforgiving sport.

“Life hasn’t really changed a whole lot, but my wife’s in college and she’s doing finals and stuff,” said Poirier when asked how his day job affects his marriage. “She’s in nursing, and she’s so busy, and I’m training for the biggest fight of my life, a five round fight, and I’m so busy. We see each other in the morning and then we see each other sometimes when we get home to make food or whatever, and we pass each other. It’s taken a lot of time away from not only her, but my little brother, my mom, and my family and friends. I commit myself so much to fighting that it’s like I’m locked away from the world. Even though I’m in my hometown, I’m in training camp and I’m locked down, tunnel vision. The only thing that matters to me is this fight and preparation for this fight and how I show up there, being the best I can be. This fight means so much to me, so much to my wife, and to my career, and I know that. So I’m just really focused right now.”

And if you’re one of the hundreds that have asked Poirier about a world title shot over the last year or so, you shouldn’t be surprised when he tells you he still wants a fight or two before getting a crack at the belt currently held by Jose Aldo. And that’s not because he’s avoiding the dynamic Brazilian, but because he realizes that any combat sport can chew you up and spit you out if you get put in a situation of too much, too soon. When Poirier gets his call to face the man holding the gold, he wants to be ready, and he wants there to be no doubt of his worthiness.

“I’m a fighter,” he said. “At the end of the day I have to put on my gloves, bite down on my mouthpiece, and I have to get in a fight with somebody. But I’m also a businessman, I’m young, and I’m not winning off of flukes. These aren’t accidental wins. So I’m not trying to ride that wave to the shore. I can stay out here in the water for a while because I feel like I am a legitimate fighter. I didn’t land a lucky punch and say ‘yes, I did it, let me call out who I can call out and try to ride this wave.’ I’m gonna be here for a while, so let’s make this a marathon and not a sprint. In the next couple years, they’re gonna know that I belong up there from beating the best guys, and the UFC is giving me the chance to do that by putting me against better competition. I was gonna fight Erik Koch before he got hurt, and that was gonna be a great fight, and now I’m fighting the Zombie, who’s on the wave. He’s got two huge wins, he’s finished some good guys, and when I get in there to fight whoever has the belt, and I think it’s gonna be Jose Aldo, people are gonna know that I’m supposed to be in there.”

Odds are that it won’t take a couple years. It may just take one more win on one more night to make it clear that the next in line hails from Lafayette, Louisiana. Dustin Poirier doesn’t talk about that though. He talks about his training camp, right down to the amount of days he has spent sacrificing for his art.

“85 days,” he said. “I’ve trained my brain, my body, my spirit, and all of that is ready. I’m a warrior and I want to go in there and battle. I don’t want to win or lose off of chance. I want to win because I’m better, or I want to lose because he’s better. I live for that competition.”