Take A Look Back At 5 Unforgettable Performances By "The Diamond"
By Thomas Gerbasi • Apr. 5, 2019

Dustin Poirier was at a crossroads. A three-fight winning streak ended at the hands of Conor McGregor in September 2014, and with a long road back into title contention at 145 pounds, he had to decide whether he was going to stay at featherweight or return to the lightweight division

The 155-pound weight class was going to be his next destination, and beginning with his April 2015 stoppage of Diego Ferreira, Poirier began a 8-1, 1 NC run that has led him to a shot at the interim UFC lightweight title against Max Holloway in the main event of UFC 236 in Atlanta on April 13. So what are the biggest performances of his second stint in the division? Read on to find out. 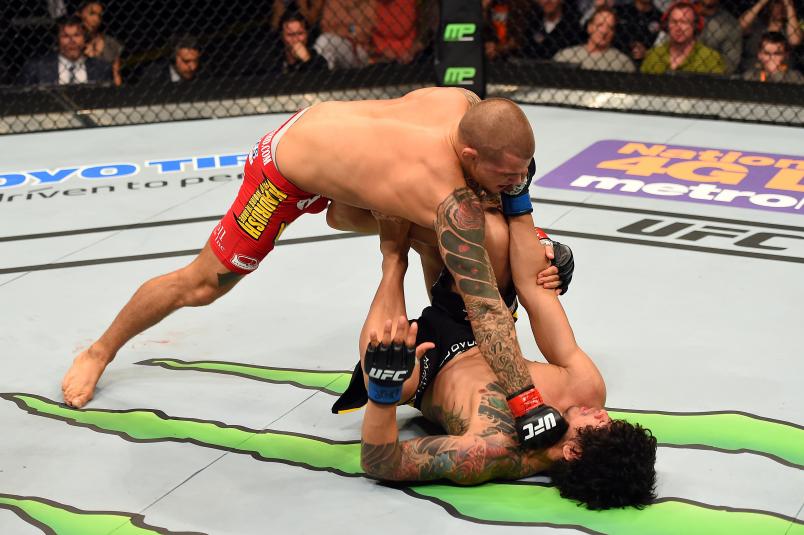 Dustin Poirier’s first lightweight bout since 2010 was a successful one, as the former featherweight contender got acclimated to his new UFC weight class with a first round stoppage of Diego Ferreira. Ferreira came out fast and the two immediately began

Dustin Poirier’s first lightweight bout since 2010 was a successful one, as the former featherweight contender got acclimated to his new UFC weight class with a first round stoppage of Diego Ferreira.

Ferreira came out fast and the two immediately began trading punches with Poirier landing a couple hard blows. Ferreira proceeded to clinch with Poirier against the fence briefly, and after breaking, the exchanges began again, both fighters getting in their share of shots. With under two minutes left, Poirier dropped Ferreira with a left hand, and while the Brazilian appeared to recover quickly, “The Diamond” didn’t let him off the hook, with ground strikes bringing in referee Todd McGovern to stop the bout at 3:45 of the opening stanza. 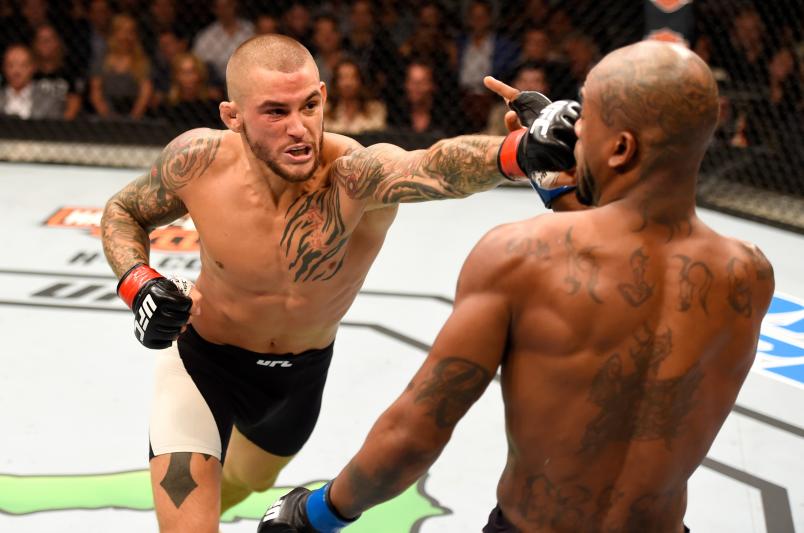 INGLEWOOD, CA - JUNE 04: Dustin Poirier punches Bobby Green in their lightweight bout during the UFC 199 event at The Forum on June 4, 2016 in Inglewood, California. (Photo by Josh Hedges/Zuffa LLC/Zuffa LLC via Getty Images)

Dustin Poirier continued his tear through the lightweight division in the main card opener, knocking out Bobby Green in the first round to make it four straight since his return to the division in 2015.

Green’s customary in-fight showboating and trash talking cost him in the second minute of the first round when Poirier cracked him on the jaw and nearly finished him. Green bounced back to his feet, but “The Diamond” kept the heat on, not allowing Green to get into gear, and after sending the Fontana, California product to the canvas again, this time he finished the bout, with referee Jason Herzog stepping in at the 2:53 mark. 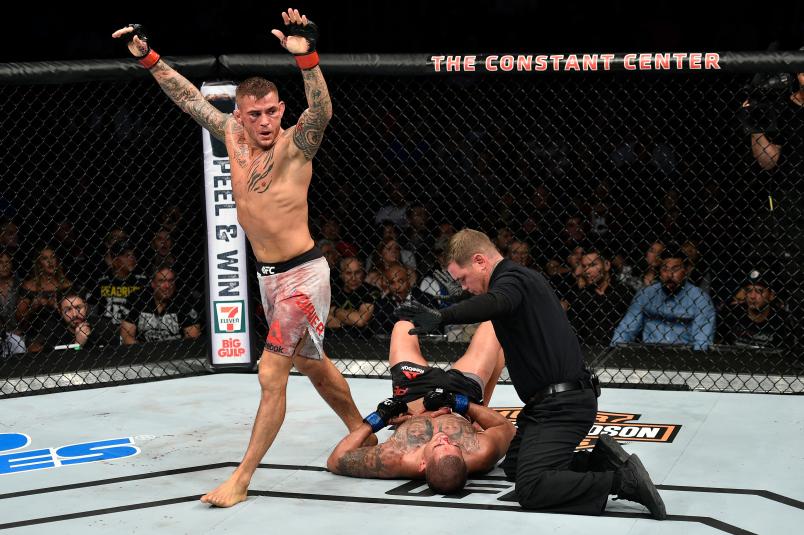 The UFC Fight Night main event in Norfolk was expected to be one to remember, and it was, as Dustin Poirier scored a third-round stoppage of former world champion Anthony Pettis at the Ted Constant Convocation Center.

“Everyone says I slip up in big fights, but that’s two champions in a row I just beat, so what’s up?” asked Poirier, who was coming off a May no contest with Eddie Alvarez.

Pettis opened up with kicks as Poirier pressured his foe, trying to get close. A minute in, Poirier got his wish and followed up with a takedown, pinning Pettis against the fence. Pettis looked for a kimura but wasn’t able to secure it, but moments later he swept his way off the mat and back to his feet. After a couple exchanges, Poirier tried another takedown, and while he wasn’t able to get it, he jarred Pettis and cut him over the left eye, leading to some furious trading up until the end of the round.

Poirier got the fight back to the mat early in round two, cutting Pettis again with an elbow. The blood was clearly bothering Pettis, but the Milwaukee native spun out of trouble and into the top position, where he fired off some elbows of his own, cutting Poirier in the process. As the crowd roared, the scrambles continued, but with under a minute left, referee Keith Peterson brought in the Octagonside physician to check Pettis’ cut. After getting the green light, Pettis locked in a triangle choke, but Poirier escaped and then ended the round with a series of hard ground strikes.

The bout hit the canvas in the opening minute of round three, Poirier taking Pettis’ back. Yet as Pettis tried to escape, he appeared to injure his ribs, forcing him to tap out at 2:08 of the round.

“I’m a nasty dude, this is what I live for,” Louisiana’s Poirier said. “The talking, the calling people out, acting crazy, that’s not what I do. I fight and I earn it.” 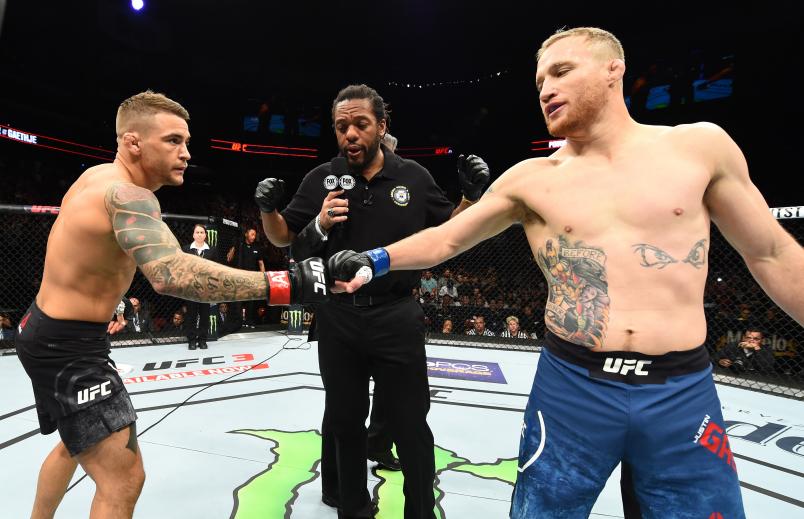 There were high expectations for the UFC Glendale main event between Dustin Poirier and Justin Gaethje, and the two lightweight contenders lived up to all of them, delivering a memorable and thrilling battle that ended with a fourth-round stoppage victory for Poirier at Gila River Arena

It was no surprise that the fists and feet began flying as soon as referee Herb Dean waved the combatants together. Gaethje focused on Poirier’s legs, while Poirier went upstairs, cutting Gaethje over the left eye. The pace was brutally fast, and as the round progressed, Poirier started digging to the body, which opened up head shots, allowing him to take the round. But the leg kicks of Gaethje had started taking their toll.

After a continuation of the hectic first round pace, there was a momentary break in the action early in round two when Poirier got poked in the eye, but there was no let-up once the two got back to business. And while Poirier landed several hard combinations, Gaethje walked through the punches and continued to batter the Louisiana native’s right leg. Late in the round, Poirier saw a couple takedown attempts come up empty, and it was Gaethje missing, but thrilling the crowd, with a flip at his foe.

Arizona’s Gaethje was clearly the fresher of the two entering round three, and he continued to stalk Poirier, who was cut over the eye and clearly bothered by it. With a little over three minutes left, Gaethje stunned Poirier with a punch upstairs, and as the fight went to the fence, Gaethje went on the attack. Poirier was able to buy some time, though, and he made it back to the center of the Octagon, where he was able to score with more hard shots. A pivotal moment came in the final minute of the round, though, when another eye poke from Gaethje cost him a point from referee Herb Dean.

Seconds into round four, a left hand from Poirier drilled Gaethje and hurt him, and “The Diamond” emptied his tank trying to finish. Gaethje did everything in his power to stay in the fight, but it was not to be, as Poirier’s barrage of punches brought in Dean to stop the bout at :33 of the fourth round. 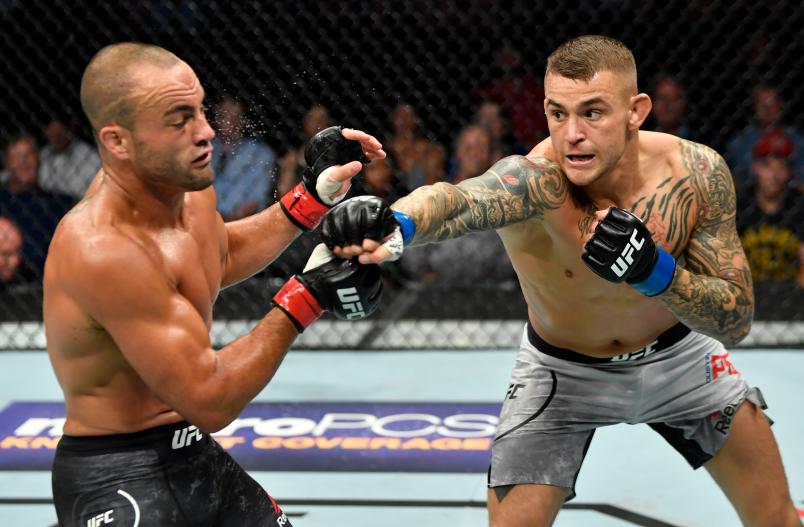 A tactical error cost former UFC lightweight champion Eddie Alvarez big in the Scotiabank Saddledome in Calgary, as an illegal elbow took a dominant position away and gave Dustin Poirier the opening he needed to hurt and stop Alvarez in the second round of their UFC Fight Night main event rematch.

“This is what I do, I live for this. I will never quit in here,” said Poirier, who engaged in a 2017 bout with Alvarez that ended in a controversial no contest.

Alvarez invested in body strikes in the opening round, mixing in head shots when Poirier would move into range. And though Poirier had a good middle portion of the round when he worked from long distance, Alvarez started and finished the round strong.

Alvarez got in trouble early in round two when he looked for a takedown and Poirier locked in a guillotine choke, but the Philadelphian was able to get free. The two then rose for a spell before an Alvarez takedown. The former champ took Poirier’s back and looked for a submission, and while Poirier got free, Alvarez remained in control until an illegal 12-6 elbow drew a warning from referee Marc Goddard and a restart. In a subsequent exchange, Poirier landed a knee that hurt Alvarez, and “The Diamond” went all-in for the finish. Hurting Alvarez repeatedly, Poirier poured it on, yet Alvarez still kept swinging until he couldn’t any longer, with Goddard stepping in at the 4:05 mark as Alvarez fell to the mat.