It only lasts a few moments, but watching Dustin Poirier’s eyes scan a room full of people reveals a lot about him.

Two minutes into the future, the 26-year-old will lock in on the conversation at hand and begin breaking down the elements that have combined in his life to make him one of the most exciting rising talents under the UFC banner, but the space between, filled with Poirier sizing up and taking in the steady stream of faces milling in and out of the breakfast nook he’s sitting in, is nothing short of fascinating.

The seemingly endless collective of passersby would hold very little bearing to most, but to Poirier they are all something to be categorized. While the recognition he’s built over the past four years competing inside the Octagon warrants a nod or two for those who throw a quick double take in his direction, the reason for his eyes burning into everything in his line of vision is an effect born out of a hard knock upbringing. 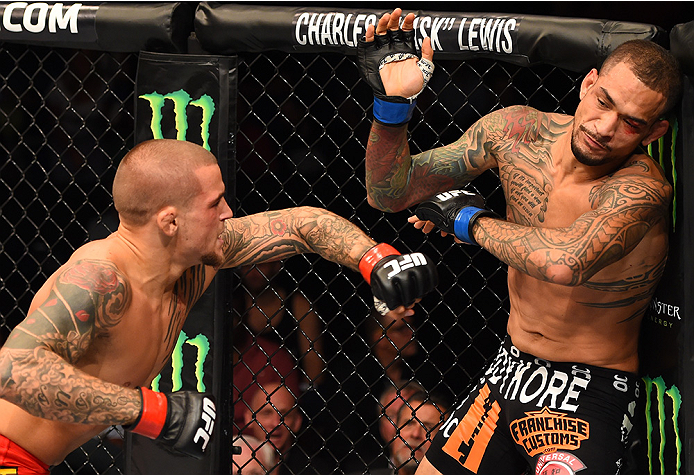 “It’s really hard for me to put my finger on what brought me to the fight life,” Poirier said. “I played sports and messed around with boxing when I was younger, but moving toward fighting was something different. I’ve always loved the purity of two men stepping in to fight one another. I was in a lot of street fights when I was younger. I got into them when I was younger, then plenty through high school, and it was always something I was good at. It’s weird to say, but I found a sense of calm in the chaos. I enjoy that about fighting.”

Poirier’s gaze is equal parts observation and education. He’s not so much looking at anything or anyone in particular as he is studying everything around him. This especially rings true when it comes to personal interactions, as the Louisiana native’s demeanor shifts into a different type of intensity. And a nuanced one at that, because it’s his ability to recognize, process and adapt that has brought him to where he is in life.

Yet, long before his adequacies in those departments made him a formidable talent in the world of mixed martial arts, Poirier relied on his propensity to read people and situations to navigate the brand of life that comes with being raised on the bayou. In that region of the country, a variety of systems are at work, setting the tone and structure of everyday life, and folks operating within the pre-set or pre-qualified guidelines find surviving and thriving to be two drastically different realities.

Poirier’s time in those systems came with plenty of friction intact. Time in and out of juvenile detention compiled to provide a stark view of what a continued life on that path would provide, just as it served to make his scholastic education all the more out of reach. That cumulative storm held plenty of negatives, but it also laid the foundation for what would become his way out of becoming another statistic.

“It still seems crazy to me,” Poirier said. “Sometimes when I see Fightville and I think about how far things have come, it’s crazy. I’ve come such a long way from where I’m from and everything happens so fast it can be hard to really gauge. I mean, Daniel [Cormier] is the UFC light heavyweight champion and we are both from the same town. He was a collegiate and Olympic wrestler so he’s had some spotlight on him for quite some time, but I never even finished high school. 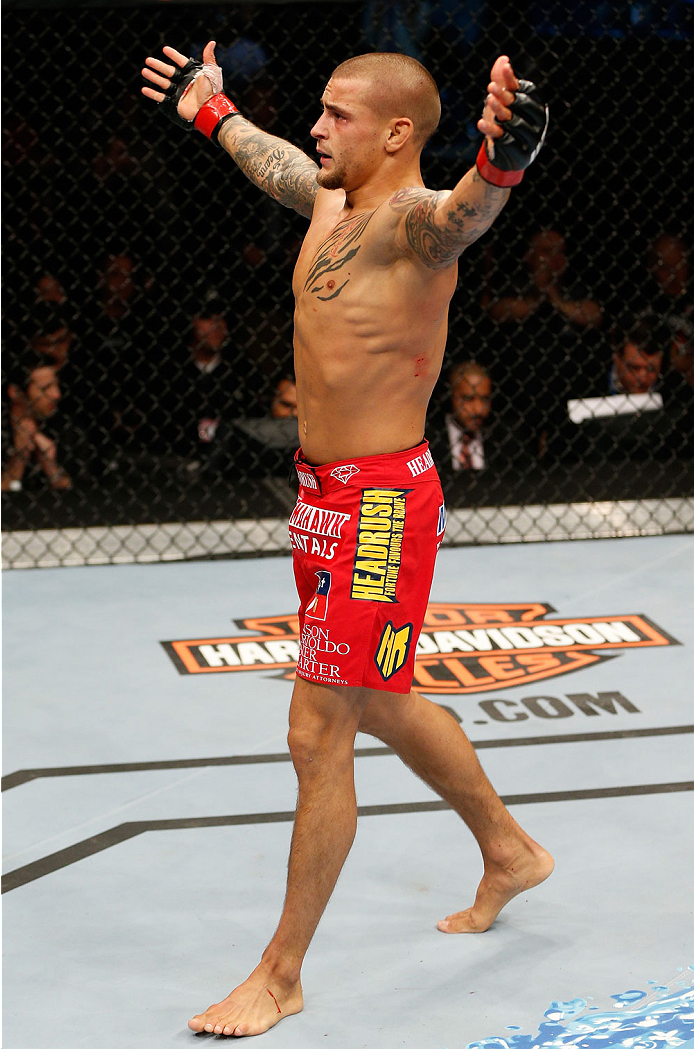 “I dropped out in the ninth grade. I went to juvenile detention around my freshman year and things just got complicated. But I’ve educated myself through the fight game. I’ve traveled the world and learned so much by paying attention to everything around me. I’ve been in the same room as people who are hugely successful in the world of business, and I’ve learned so much about the game just because I pay attention. I’m getting opportunities to meet people and be in rooms I otherwise never would have been able to experience had it not been for the things I’ve done in the fight game.”

Fighting is something Poirier had been doing in one way or another his entire life and he had the emotion and aggression to serve as proof. That said, forging a career in combat sports requires more than ample amounts of anger, because that fuel burns up quickly and cannot be sustained over the long haul. It either consumes the individual or drives them to a place where more tools can be added.

For Poirier, that stage of his career was captured in the critically acclaimed documentary Fightville. Cameras followed his push to emerge from the Louisiana regional circuit to make it to the sport’s biggest stage. Yet, while “The Diamond’s” arrival to the WEC provided a fitting cap to close out the film, it took Poirier reaching the next level to realize that so much more was needed.

He wasn’t content with getting a fight or two inside the Octagon just to be able to sit around years down the road and talk about how he made it to the UFC the way former high school football players relive their glory years after that time has passed. Poirier simply wanted more and it was going to take a few hard knocks to erase the championship visions that play so vividly in his mind. He knew a big decision had to be made, and just like everything else in his life, it was going to come down to whatever conclusion he and his wife Jolie came to.

The two met as teenagers, fell in love and married at a young age, and it provided Poirier with the consistent stability his life had been lacking. In Jolie he found someone who not only recognized the talents he possessed as a fighter, but truly believed in what he could become. The Poiriers were willing to do whatever it took for Dustin’s career to progress and they held strong no matter what adversity came their way.

“Moving down to Coconut Creek was a big deal for us at the time because she was still in school,” Poirier explained. “We are both from a small town and we bought a house there when we were 18 years old. We got married when we were 20. Going down to ATT meant we were going to have to leave our home there and it was a big decision. She’s the biggest support I have and she knew it’s what I needed to do. I packed up all my stuff and got a one bedroom apartment down in Florida to start. She had almost a year left of nursing school before she was done so she stayed in Louisiana.

“I beat Jonathan Brookins and decided to stay down in Florida. Things were tough but they were moving in the right direction and we decided to stay the course. Then I got the call to fight Cub Swanson. I was close to 180 pounds and they wanted me to fight him at 145 in three weeks. I was in Florida by myself and ended up having a horrible weight cut. I lost that fight and afterwards I came home and didn’t know what I was doing. She knew she needed to be there with me and dropped out of school and moved down to Florida with me. We packed up everything we owned and made the full move down to South Florida. We are renting out our house in Louisiana and bought a home in Florida. That’s where we are at now and it’s great.”

While Poirier has experienced both success and setbacks on his quest to become a world champion, his ability to adapt to the game he’s committed his life to has continued to keep his progression moving in a positive direction. There is no better example of his ability to thrive than his decision to abandon a top 10 ranking in the featherweight division to jump head on into the ultra-competitive ranks of the 155-pound fold.

The majority of fighters drop down a weight class when they are looking to find some traction, but Poirier has never been one to go with the grain. He decided the time had come for him to stop depleting himself while shedding weight to make the contracted limit, and he shifted his focus toward the things he needed to do in order to compete in a new division.

And following two dynamite performances that have produced back-to-back knockout victories, Poirier has zero doubts that his decision was the right one.

“I jumped from one shark tank right into another and that excites me,” Poirier said. “I believe I’m one of the best in the world and the only way to prove that is to do it in the cage. My first two fights at 155 have been against tough competition and I’ve finished them both. Neither have been top 10 guys, but both of them have good track records of success.

Poirier has set his sights on getting his hands on the lightweight divisional title, and he’s ready to do whatever work is necessary to bring his dream to life. He will take the next step of his journey when he squares off with yet another young gun in Ireland’s Joseph Duffy in the main event when the UFC returns to Dublin on October 24.

The fight will feature two of the 155-pound division’s most talented rising stars, and will provide Poirier the opportunity to move closer to solidifying himself as a certified player in the heated lightweight title hunt. Poirier has been close to achieving this status before, and the resilience he’s acquired on his journey thus far has allowed Poirier to forge the mindset that he’ll never be turned back again.

One big inspiration in that regard has come through working with current welterweight champion and resurgent veteran Robbie Lawler. Watching the things “Ruthless” has overcome to claim the greatest prize in all of mixed martial arts has taught Poirier that there is great reward in the ability to bounce back. Poirier has been written off plenty of times in his life, but that hasn’t stopped him from fighting for what he believes can be achieved.

His ultimate goal is to become a UFC champion, and he’s determined to do whatever it takes to make that happen.

“Watching Robbie Lawler has been a big inspiration for me,” Poirier said. “He’s not only a training partner, but a personal friend of mine, and to see the success he’s achieved after going through so many ups and downs in his career has been inspiring. It’s awesome to see what is possible. It goes to show that you can’t write anybody off.

“Anything I’ve ever set my mind to or wanted to do I’ve done,” he added. “It happens somehow or someway and it’s always been that way since I was young. I’ve had success and been through struggles and adversity, but I still have my mind on becoming a world champion. And I one hundred percent believe it’s going to happen.”