When he's not in the Octagon, Dustin Poirier is contributing to a bigger fight.
By Thomas Gerbasi, on Twitter: @TGerbasi • Apr. 23, 2020

In New York City, pizza is religion. So when we see those from other parts of this great nation taking a stab at making something so sacred, close attention is paid.

UFC lightweight star Dustin Poirier was recently seen with a handful of mozzarella cheese and eight pies on a counter in Lafayette, Louisiana. Mr. Poirier, did that pizza live up to NYC standards?

“Of course, they were great,” he laughs. “They were incredible.”

Given Poirier’s character and reputation for always telling it like it is, we will take him at his word. Even better, those pies had to be good because they were being made with the folks at Deano’s Pizza to feed hospital staff working tirelessly to help fight off the COVID-19 pandemic.

“There was such a great response from the hospital staff, and everybody was excited,” said Poirier. “It just felt good. We wanted to do something and I wasn't sure how quickly we could get our hands on masks or protective equipment, so I talked to the foundation, everybody on the board, and we decided to feed as many healthcare workers as we can. There's also a coliseum here and they're using the parking lot for COVID-19 testing, so they have people outside all day there, and we decided to feed as many people helping out as we could. We ended up doing a thousand meals, so I'm pumped about that.”

The foundation Poirier is referring to is the one he started with his wife Jolie in April 2018, The Good Fight Foundation, and while “The Diamond” has not gone over the top in trying to promote the work they’re doing, he should, because the 31-year-old isn’t doing a one-off event that doubles as a photo op. Instead, the foundation is always working, always looking to find ways to help those who need it.

“When we do something, we announce it and stuff like that, but I don't want to overdo it,” he humbly admits. “But I should be pushing for it.”

Originally, Poirier got the idea to help out those in need by auctioning off his fight-used gear, starting with his first fight against Eddie Alvarez in 2017. The money raised from that auction provided 3,000 meals for the Second Harvest Food Bank, and it got the ball rolling, with the Poiriers finding local charities to donate too after each fight.

It’s as selfless an endeavor as you will find, in or out of pro sports, and you can hear the excitement in Poirier’s voice when he talks about what the foundation has done or what it’s doing next. And while local charities are often the focus, last year, the Good Fight went global after Poirier’s fight with Khabib Nurmagomedov, with the lightweight champion donating $100,000 to the foundation and UFC President Dana White matching that contribution. With the money, Poirier and company teamed up with Justin Wren’s Fight for the Forgotten, and the results were spectacular.

“This last one with Khabib, we bought a tribe forty acres of land and built seven water towers and water wells in Africa,” Poirier said.

That’s life-changing for those people, but even gestures that seem smaller in scale are just as important. Case in point, a recent campaign to get car seats to the Women’s and Children’s Hospital in Lafayette.

“We bought enough car seats for 12 months for the hospital,” said Poirier. “It's crazy because we were talking to them about helping out with a family or maybe with some hospital bills, but they told us that six or seven times a month, they have mothers who can't afford a car seat so that they can leave with their newborns. That blew my mind.”

It's a great thing Poirier is doing. But the question is, why?

“I just know how it makes me feel and it makes me feel good,” he said. “And it makes me feel like - it's sounds cheesy - but I'm fighting the good fight. When I get in that Octagon and I fight, I'm gonna fight as hard as I can. And I realized that throughout my career, getting in there and fighting is one thing and it comes and goes and I won't be able to do that anymore. But the thing that does matter is how many people I can affect from that same fight. Me and my family are gonna benefit from the fight financially. But what about other people? What if I can reach out and affect other people?” 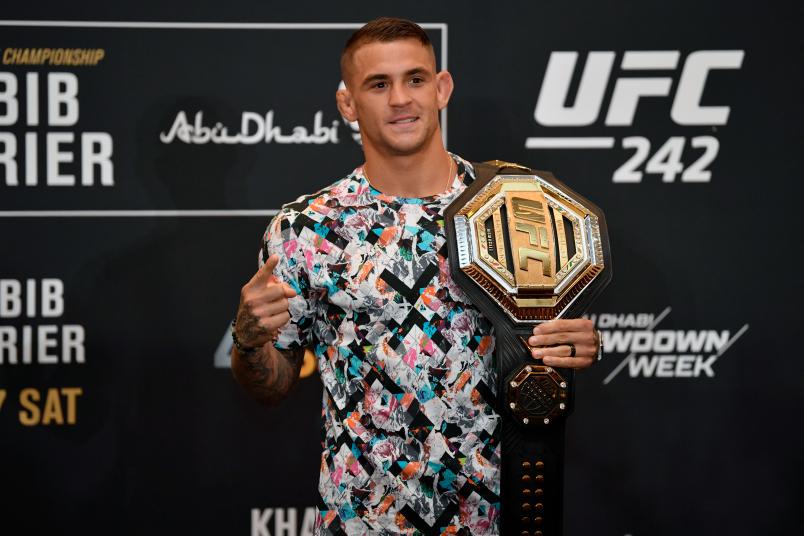 You don’t hear too many folks with that attitude. If you didn’t already know Poirier as one of the good guys, this should confirm it for you. Not that you’ll ever seen him patting himself on the back.

“The further I can affect people from a fight, whether it's auctioning off something or giving somebody hope, things like that live forever,” he said. “I want to live past fighting. I don't want my legacy to stop at fighting. ‘Oh, he was a good fighter.’ That's cool, that's great, I study, and I love my craft and I try to get better every day. But I want to live past the bell. Teddy Atlas wrote me a letter one time, and it said, 'A champion is a champion not only when the bell rings in the ring, but when the bell rings in life.' That stuck with me. And when I'm preparing for a fight and I see a cause, not only is the ring timer gonna ring when I step into the Octagon, but it rings when I'm in camp and I see something I can affect. So with The Good Fight, we're always in a fight and the bell's ringing for somebody and I'm trying to be in everybody's corner that I can. I'm trying to help and reach as many people as I can through the platform that I have with fighting. And in the world that we’re living in, it’s not hard to find reasons to try to help.”

True, but usually people try to find reasons not to help. Dustin Poirier has taken the other road, and there are a lot of people’s lives who are better because of that choice. One young lady who will certainly benefit is Poirier’s daughter, Parker Noelle. I ask him what he hopes she will one day take away from his creation of The Good Fight Foundation.

“I just want her to know that I tried my best to be the best I could be, to affect as many people positively through the platform and through fighting that I can,” Poirier said. “I'm gonna fight, regardless. What's another pair of shorts with a story on the wall that I frame or another pair of gloves that I have in a dresser full of gloves from the nights that I fought? That could be benefitting people. I could be raising thousands of dollars and putting food on the plates of people who don't have it or putting backpacks on kids who don't have them. We've done so many things. And that's what I want my daughter to know, that a spark can cause an inferno; you just have to believe in something and try and you can change people's lives. I just want my daughter to be proud.”

For more information on The Good Fight Foundation, visit https://www.thegoodfightgroup.com/