"This is everything to me. Winning another fight means everything for me, and I feel like I’m going to go in there and make a statement." - Dustin Poirier 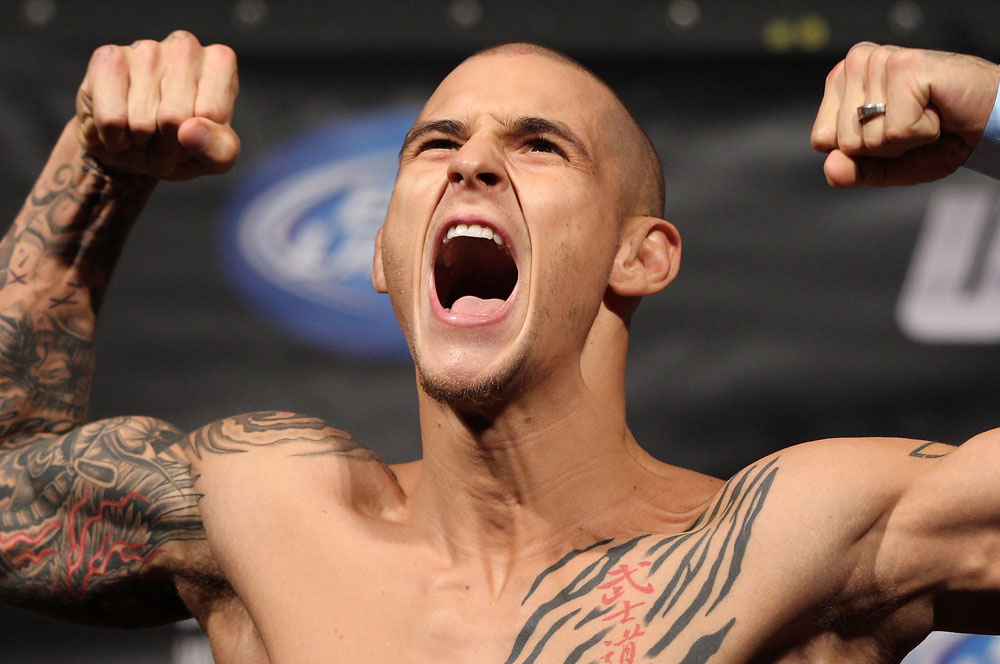 Dustin Poirier’s loss to “The Korean Zombie” Chan Sung Jung in May wasn’t the catalyst for him to change camps. It was more like the final piece of data that convinced him it was indeed time to uproot from his home base of Lafayette, Louisiana and find a new place to settle down.

Throughout his climb up the ranks in the WEC and UFC, the 23-year-old featherweight trained under Ultimate Fighter alum Tim Credeur as the star student at his Gladiators Academy gym. The partnership had worked pretty well, with Poirier first gaining recognition for his UFC 125 upset of Josh Grispi, and then his starring turn in the outstanding documentary Fightville.

Two more wins moved “The Diamond” into contention in the 145-pound ranks, and set him up opposite Jung in a main event showdown in May on FUEL TV. The entertaining affair ended with Poirier getting submitted in the fourth round, and a few months later, he announced a change of address.

“It was a hard decision, but we were talking about it before my last fight; we knew it was getting to that time,” Poirier said of the decision to depart his long-time home. “I didn’t have the guys to show up every day and push me, and I needed to be around top-caliber guys. Tim knew that, and I knew that too.

“That’s not saying that the guys at Gladiators aren’t good, but it’s different when you’re training with those guys and then you get in the cage and fight the best guys in the world. You want to be seeing that on a daily basis. That’s what we knew had to happen, and that’s why I moved here.”

“Here” is Coconut Creek, Florida and American Top Team, the revered fight camp that has produced a constant stream of top contenders across a number of organizations over the years, including former WEC featherweight champion Mike Brown, Thiago Alves, and Antonio “Bigfoot” Silva.

It’s a major change for Poirier, both personally and professionally.

Rather than pack his bags for Florida when it came time for him to prepare for a fight, Poirier and his wife Jolie opted to relocate permanently. Deciding to leave home was difficult, but it was something the driven and motivated young featherweight knew was necessarily in order to further his career and work towards achieving his ultimate goal.

“It’s a huge sacrifice,” offered Poirier. “Everything I love and everything I have was in Louisiana, where I’m from and grew up. My family is there – just the security of being comfortable, knowing everybody, and stuff like that – but these chances don’t come over and over again.

“I’m in the UFC, and I want to be a world champion, so I decided to do what I had to do, and make sacrifices. I’m selling my house in Louisiana, and just completely moved out here.

“I’m a guy that trains year-round,” he continued. “After a fight, I might take a week off at the most and then I’m back in the gym, so I just felt like doing training camp somewhere – I would be prepared for fights, but I wouldn’t be getting better all around. If you just do camps and you don’t train between that, you’re just getting into shape and sharpening what you already have. Between fights, you can learn new stuff, try new stuff, and have some fun, so it was important for me to be around those kinds of guys all the time. That’s why I’m here.”

The first chance Poirier has to showcase the improvements he’s made since filing his change of address forms comes this weekend against Jonathan Brookins. Like Poirier, the enigmatic TUF winner is in need of a reset, having lost his last outing and two of his first three since besting Michael Johnson by unanimous decision to enter the fraternity of Ultimate Fighter winners on Season 12.

Though he gives Brookins’ praise without prompting and knows there are areas where his upcoming opponent is dangerous, the quietly charismatic and always entertaining Poirier is chomping at the bit to return to the cage and get back into the win column.

“He’s a grinder; he slows the pace down in his fights and wears guys down; he presses them up against the fence, beats them up, and grinds out wins. He’s dangerous there. I think he’s a lot stronger than he looks. He’s a big ‘45er – he’s tall and long and he has really good wresting, so I have to use my wrestling and my boxing to keep a good distance, and I have to keep my back off the fence.

“This is going to sound cheesy, but this is my passion,” remarked Poirier, laughing at his use of a timeless cliché. “Every day I wake up and try to better myself. All day, every day, everything I do is to be a better fighter. This is my job, my hobby; this is everything to me. Winning another fight means everything for me, and I feel like I’m going to go in there and make a statement.

“I have a bunch of amateur fights and 14 pro fights, and I’ve never lost two fights in a row in my life. I can’t even picture myself losing another fight. I’m trying to stay relevant, and I’m trying to be a name people want to see fight – someone the UFC puts on main cards. I’m trying to provide for me and my wife, and the only way to do that is to win fights.”

While the loss to Jung wasn’t the reason Poirier decided to relocate, it does serve as daily motivation for the intensely driven featherweight with the 12-2 record. He’s watched it numerous times, dissecting every second of the back-and-forth affair to figure out what he did right, what he did wrong, and where he could have pressed harder in order to try and put away the resilient “Korean Zombie.”

The loss eats at him; talking about it increases the sharpness of his words and the force of his delivery. He has designs on establishing himself as one of the best in not only the featherweight division, but the sport as a whole, and doesn’t want to feel the sting of defeat again.

“It sucks to have (another) loss on my record – I can never have that back. It’s another person who defeated me. He conquered me that night. I can never get that back, and that hurts me because I’m a warrior – I want to battle, and I want to win every fight. I want to be a legend, so I have to take it and learn from it. I feel like one day I’m going to get my chance to fight him again, and I’m going to do what I should have done in the first fight. Looking back on it, it was a huge learning experience for me, and I’m hoping to not make those mistakes again.”

That’s why this weekend’s bout with Brookins is so important.

The featherweight division continues to grow deeper with each passing month as lightweights move down the scale and promising young talent keeps climbing the ladder. Back in May, Poirier was on the brink of a title shot. Seven months later, he’s buried behind a list of contenders that doesn’t look like it will be getting shorter any time soon.