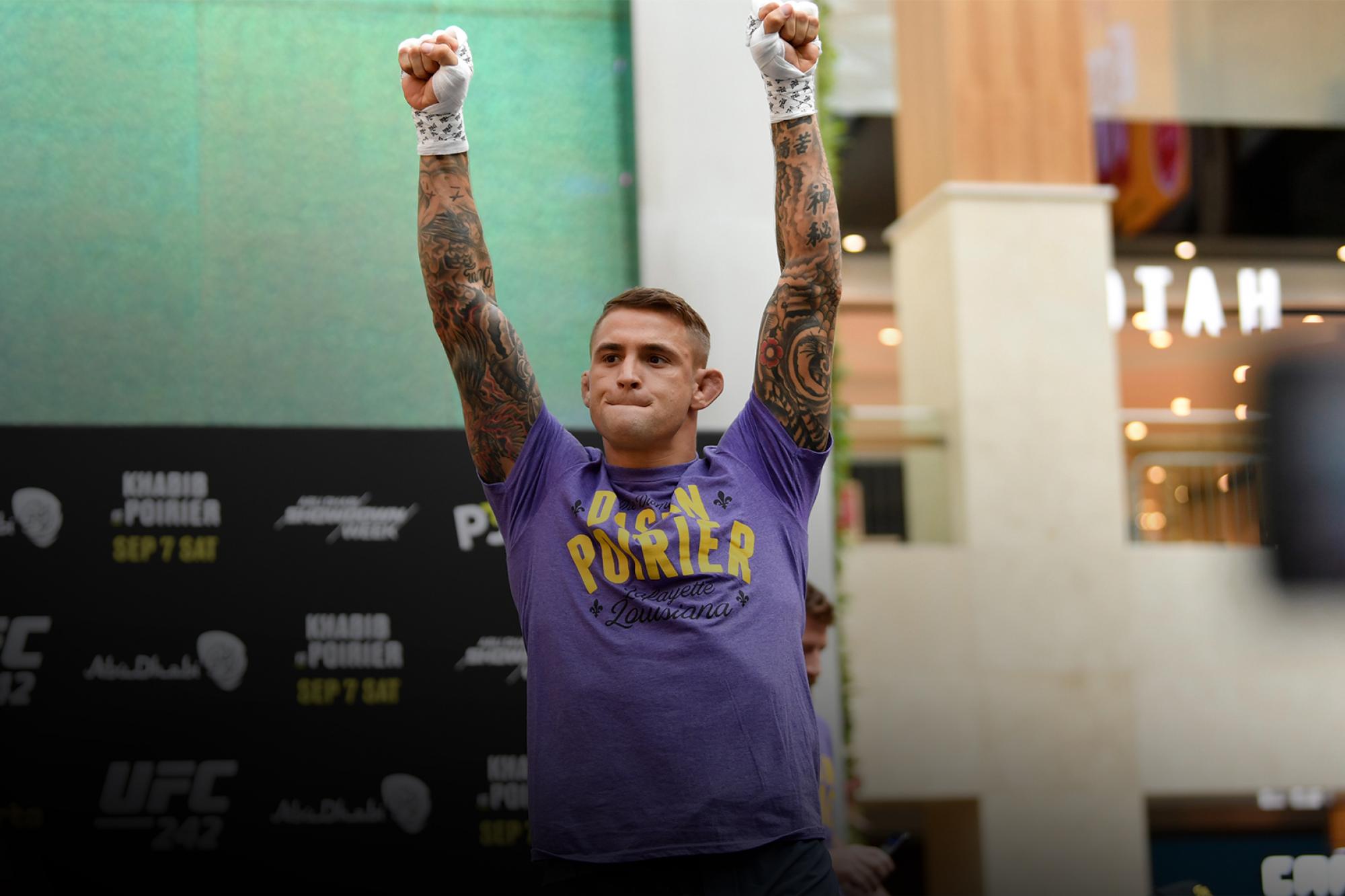 Few mixed martial artists combine the quality and spirit that Dustin Poirier does, and that's what makes him such a distinctive fighter.
By Thomas Gerbasi, on Twitter @tgerbasi • Jun. 25, 2020

I’ve told this story a million times, but every time Dustin Poirier is about to fight, I think about it.

2012. Poirier is coming off a Fight of the Night loss to Chan Sung Jung and is in Las Vegas a couple weeks later to take in another UFC card. I see him in the host hotel and congratulate him on a great performance.

He is gracious, but you could tell by his face and body language that there were no moral victories taken from his first UFC loss. It stung. And all the bonuses and kind words wouldn’t change that.

“I was young,” Poirier laughs, a little over eight years later. “And still, if I lose a fight and you see me, I'm gonna be upset about it. Mixed martial arts is a crazy thing and I'm fighting the best guys every time. But I know for sure I'm gonna leave it all out there, win, lose or draw, and I have faith in that.”

We have faith in that, too. It’s why Poirier isn’t just one of the best fighters in the world, but one of the most popular. That doesn’t come down to his interactions with fans or his charity work through his Good Fight Foundation, though both play a part. It’s because he will go above and beyond the call of duty to get the win, and if he doesn’t come out victorious, he will make every effort to make sure his opponent knows they’ve been in a fight.

That’s a gift, one he hasn’t been able to share since hip surgery followed his September 2019 loss to Khabib Nurmagomedov in their lightweight title unification bout. That all changes on Saturday when he headlines the UFC Fight Night event in Las Vegas against Dan Hooker. And while “The Diamond” is always down to get in a scrap, even training has had an extra jolt after he was green-lighted to get back into the American Top Team gym.

“Honestly, the time away with the recovery from surgery and the loss in the title unification fight made me realize how much I love this,” he said. “Not that I didn't love what I do, but it made me realize how much I not only love it, but need it, to a certain extent. Sometimes when you're in the middle of an eight or ten week training camp, about halfway through you're sweating and hurting and being beat up on the mats and I'd rather be anywhere but there. A failed takedown attempt and somebody's on top of you, you're exhausted, and you've still got another five, six weeks to go before you finally fight. I'd rather be anywhere else. But then the crazy thing is, sitting on my couch, not being able to put any weight on my leg for over seven weeks at all made me realize that there's no other place that I would rather be than underneath this hairy, sweaty guy, tired. (Laughs) I need that. That's all I know. Since I was 17, 18 years old, this has been my passion and my drive and my livelihood. This is how I live.”

It's the side that most don’t see. If being mauled by that hairy, sweaty guy reminds you of how much you love the game, you’re a lifer in this sport, and that’s certainly the case for the Louisianan, still just 31 years old. Yet while he’s young in life, he’s paid his way in sweat and blood since turning pro in 2009, making it not much of a surprise that his hip started to give him issues over the last couple years.

“The hip's been bothering me for a very long time,” he said. “It's been years and years, gradually getting a little worse, a little tighter, more painful. But finally we got something done about it. There was a lot of recovery and it's been trying and testing for me, but like always, I pull through somehow and stay focused and keep the drive, and here I am, healthy and ready to fight.”

That’s the physical part. Mentally, Poirier has been ready to get in a scrap ever since he left Abu Dhabi after the Nurmagomedov bout. And while some might look at the first fight back after a loss and an injury-induced layoff as the perfect time to maybe take on someone lower in the top 15, the No. 3-ranked Poirier went right for the No. 5-ranked Hooker for a matchup that is expected to be nothing less than Armageddon in short pants for as long as it lasts. That takes an extra level of mental preparation knowing that things could go south at some point over the 25 scheduled minutes. How is he able to do it?

“Because I've been there before,” Poirier said. “In a strange, weird way, I find comfort in there, in those times, because I know I'm nastier than these guys. I know I'm grittier than these guys. I know if I'm tired and bleeding, they're exhausted and want to be out of there. I can suffer more than these guys can when it comes down to that kind of fight. When it's a dogfight, when our foreheads are on each other and we're both bleeding and we're punching each other's body against the fence, I know that I'm going to win that fight when it gets to that point because I'm willing to do more. I'm willing to suffer more. And a lot of times, that's what it takes.”

Anyone about to fight Dustin Poirier should be intimidated by that. He laughs.

Hooker probably won’t be, as he shares many of the same thoughts on fighting as Poirier does. It’s why this is such a highly anticipated fight, and not just because of its importance in the division. This could be a prelim bout with no rankings attached, and what happens when the Octagon door shuts would be the same. It’s going to push both men to places they’ve learned to become comfortable in, but that most would avoid if at all possible.

“I get myself ready for that by knowing that adversity is probably going to present itself in that 25 minutes,” Poirier said. “I'm fighting a top five guy in the world who's known for being in exciting fights. There's no way that adversity will not present itself in 25 minutes if the fight unfolds like the way it probably will. I could go out there and get the fight done early; that would be great. But the chances of adversity being there are very high and I know that going into it and I believe that's what helps me deal with those moments in the fight when I get hit with a good shot or I'm bleeding or I'm in a bad position.”

Mixed martial arts is a crazy thing and I'm fighting the best guys every time. But I know for sure I'm gonna leave it all out there, win, lose or draw, and I have faith in that. 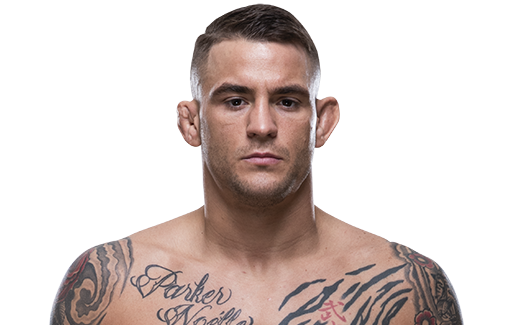 Poirier recalls his April 2018 bout with the current interim lightweight champion, Justin Gaethje. The Fight of the Night checks could have been filled out before the pair walked out to the Octagon; that’s how much of a can’t miss this one was. And though it was Poirier leaving Glendale, Arizona with a fourth-round TKO win, he had to dig deep to get there.

“When he hit me and hurt me and put me against the fence, the weeks going up to the fight, I knew that something like that was probably gonna happen,” said Poirier. “And whenever it happens, you say, 'Damn, here we are. How do I survive? How do I stay protected? How do I get to the next part of this battle?'”

He found a way. Just like he found a way against Anthony Pettis, Eddie Alvarez and Max Holloway. The Holloway win in April 2019 earned him his first championship belt, putting him in the history books forever. But a hundred years from now, when people talk about Poirier, it won’t be about the belts or the win-loss record. Those people will remember the fights and the way he made them feel when he was in the fray, taking and giving while trying to find a way to outlast an equally determined foe. That’s a glorious story to have written and one he is proud to have penned with his fists, even if there are still more chapters to go.

Watch Poirier On June 27 on ESPN+

“That almost means more to me than the title,” Poirier said. “That means a lot to me. Only a few people really feel that, and those people who do feel that, I really, really appreciate it because guys like Arturo Gatti, Micky Ward - the list goes on and on in boxing and mixed martial arts - those guys will live forever. And that's what I want. I want to be known as a warrior, as a guy who left it all out there, as a guy who did what he could with what he had, and damn, did he do a great job. And you remember those fights, you remember the passion that I fought with.”

It’s not going to stop now, either. There’s a fight to be fought on Saturday, one that could put him back in the title conversation with a win. He knows what’s at stake, but he would fight the same way anyway. That’s how he’s built.

To provide a better life for his family. Now you know why Dustin Poirier fights the way he does.