"I feel like my performances are getting better every time I’m in there,
I’m getting more comfortable with the process, and I feel like I’m
coming into my own." - Dustin Poirier 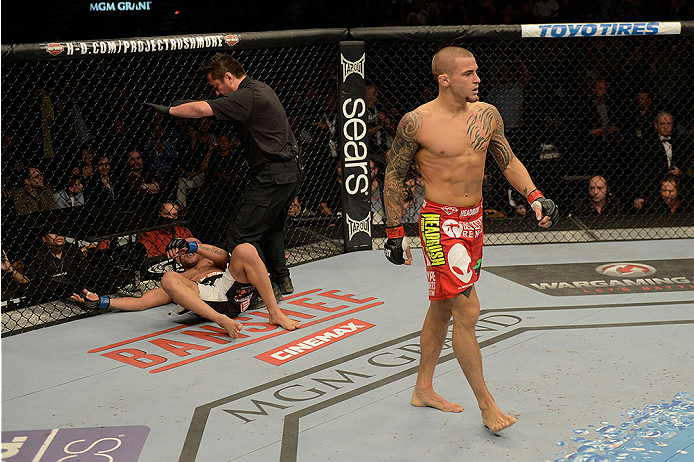 Three years ago inside a darkened movie theater in Toronto, Dustin Poirier watched, slouched in his chair, as his career on the regional MMA circuit played out on the big screen.

The breakout star of the critically acclaimed documentary Fightville, which opened the 2011 Hot Docs Festival two days prior to 55,000 people packing the Rogers Centre for UFC 129, the humble Louisiana native was still adjusting to being in the spotlight.

While the film tracked his rise through the ranks in his home state, culminating with his knockout win over Derek Gauthier in Montreal and a note that the then-unbeaten fighter was ultimately signed by the WEC, Poirier had already started on his next journey. On New Year’s Day, “The Diamond” earned his first UFC win, dominating title contender Josh Grispi and establishing himself as one to watch in the brand new featherweight division.

Poirier no longer lives in Lafayette, Louisiana, eschewing the only place he’d called home and the gym where he first honed his fighting skills into something that could provide a better life for him and his family a year-and-a-half ago.

Along with his wife Jolie, the 25-year-old relocated to Coconut Creek, Florida, where he saw the opportunity to train with the all-star cast at American Top Team as a means to taking the next step forward in his career.

“This is home away from home now,” he says of Florida, squeezing in an interview between training sessions. “I really feel like I’m in a good place here.”

Firmly entrenched in the top tier of the featherweight division before uprooting and striking out to Florida, Poirier knew that in order to maximize his opportunities and take his career to another level, being the big fish in a small pond at home in Louisiana wasn’t going to cut it.

In American Top Team, he has found a collection of elite coaches and training partners that can further refine his skills and provide the type of insight that only comes from years of experience competing against the best in the sport.

Instead of training with a group of fighters with minimal experience, Poirier now spends every day in the company of former champions and current contenders, including five additional UFC featherweights and recent welterweight title challenger Robbie Lawler.

“From a professional angle, I get to see the best guys in the world do their training camps and train alongside of them, and see how they do things, like how they rest their bodies and train the right way.

“When I was the big fish, I was making it up as I went, kind of. I think I was over-training a lot. I might still have a small problem with wanting to do more than I should, but watching these guys put in the work, take the nights they need off, and training smart, those are the big things that I’ve learned training alongside these guys.”

Last month, Poirier accompanied Lawler to Dallas for his title fight against Johny Hendricks at UFC 171, cornering the 10-year veteran in the biggest fight of his career. It was an experience that had an indelible impact on the emerging featherweight who plans on one day making his walk to the Octagon in a championship bout.

“He told me when he asked me to come along that he wanted to give that to me as a gift because one day he thinks I’m going to be taking that same walk,” Poirier recalls of Lawler’s invitation. “That really meant a lot to me for a veteran and a guy I look up to to see something in me that he thought - he said he wanted me to be there to witness it so that I could see that it’s just another fight; it’s not as big as you think it might be.

“And to tell you the truth, it was - it was just another fight,” he adds, still sounding a little surprised. “Maybe there are a couple more interviews and certainly more on the line, but the process was the same. You put in the work, and on fight week, you do everything normal.

“Just because it’s being publicized as this huge title fight, when all the interviews and everything are over, it’s still you and your coaches, and you’re still fighting somebody.”

That’s the type of experience Poirier wouldn’t have been able to enjoy prior to his move to Florida, and one that should pay immediate dividends as he continues his climb up the 145-pound ranks.

He’s always been an emotional fighter - someone that turns every bout into a do or die situation and often breaks down into tears during post-fight interviews, win or lose - but traveling with Lawler and the rest of his team to Dallas showed the scrappy southpaw that despite everything that is at stake and the hype that surrounds the events, fighting for a UFC belt isn’t all that different from fighting Derek Krantz for a title under the USA MMA banner back home in Lafayette.

“When it’s my turn to take the walk, I’ll definitely be prepared.”

Poirier’s chance to make that walk draws closer with every victory.

Firmly entrenched in the Top 10 of the featherweight division, the 15-3 fighter returns to the Octagon later this month, stepping in against Akira Corassani as part of the TUF Nations Finale in Quebec City.

“It’s a fight of circumstance I guess you could say,” admits Poirier of the bout with the unranked Ultimate Fighter alumnus. “A lot of the top guys were booked up. I had known for a while that Cub Swanson was going to be fighting Jeremy Stephens (because) I was asking for the Cub rematch. I was pushing for the Dennis Siver fight and that looked like it was going to happen in May, but they told me he was dealing with some injuries, so it just kind of happened that I got the call to fight Akira.

“At the end of the day - I’ve said this before - my job is to fight people. Send the papers over so we can sign this, make it official and I can go back to work - that’s pretty much it.

“When I get the call to go to work, I lace up my gloves and go to work.”

In his two appearances since losing to Swanson on short notice last February, Poirier has shown continued development, tightening up some of the aspects of his game that cost him in the past, while showing greater polish with his striking.

While part of that improvement can be attributed to the work he’s put in at American Top Team, a great deal of it comes from his continued maturation as a fighter and a person.

Not everyone makes that leap.

Many fighters have appeared destined for greatness only to plateau before reaching their full potential. Poirier has been tabbed as a future title contender - and perhaps world champion - since his upset win over Grispi, and though he still has some ground to cover before reaching that point, it’s clear he’s made the leap.

“I feel like my performances are getting better every time I’m in there, I’m getting more comfortable with the process, and I feel like I’m coming into my own. I’m growing a lot - as a fighter and as a person - through this journey, and I’m confident in my skills.

“I don’t feel like I’m trying to prove that I’m a good fighter - now I’m trying to show you improvements and show you new stuff,” he adds, putting into words the development that is evident with each subsequent appearance he makes in the cage. “This is going to be my 10th fight in the UFC, so I’m just trying to show the growth and maturity I’ve developed from being around the greatest guys in the world.

“I’ve proven that I belong here - now it’s about proving I’m a top three guy, a top contender and then as a champion.”

There is a lot at stake for Poirier when he faces off with Corassani at the Colisee Pepsi later this month.

Currently ranked No. 6 in the featherweight division, each of the five fighters ranked ahead of him have already shared the cage with reigning champion Jose Aldo in the past. While the Brazilian standout is likely to face current No. 1 contender Chad Mendes for a second time at some point this year, the next opportunity to fight for championship gold is up for grabs, and Poirier knows that collecting another victory is the only way to keep his chances to challenging for the title alive.

“With a win against Akira, that will be three-in-a-row and I’m starting to feel like it’s close again,” admits Poirier, who followed up his August decision win over Erik Koch with a first-round knockout of former Ultimate Fighter winner Diego Brandao at UFC 168 in December.

“I have a lot to lose in this fight. I could have said, `No, I don’t want to fight that guy. I want a top five guy.’ I don’t even know what number this guy is in the featherweight division, so I have a lot to lose. That keeps me hungry. I see everything as a challenge.

“I’ve trained with Akira before,” he continues. “I know a lot of people are saying he’s an a**hole, this and that, but I thought he was a cool guy when I was hanging around him. Frankie Edgar brought me up there to New Jersey to be a sparring partner for Ben Henderson because Ben’s a southpaw, and Frankie and Akira train together, so I got some good rounds in with Akira. We trained a good bit and I thought he was a nice guy.

“That being said, he’s the enemy now. All friendship, all this stuff (goes away). I don’t want to slap hands with him or joke about what’s about to happen. There’s nothing to joke about - it’s about to get pretty serious.

“I need to go out there and fight to my potential - do what I’m trained to do. I feel like I’m better than this guy everywhere. I need to push the pace and perform to my ability. If I do that, I beat him. First or second round, we’re going to get him out of there.”

When filmmakers Michael Tucker and Petra Epperlein were following Poirier around Lafayette, he was one of thousands of MMA hopefuls - a kid with a chip on his shoulder and a goal in his mind.

When he was sitting in that dimmed theater in Toronto three years ago, watching his climb through the regional ranks play to a packed house, he was an emerging prospect with an impressive victory in his UFC debut and a bright future in front of him.

Today, Poirier is prepping for his 10th UFC appearance - an established force in the featherweight ranks, poised to take another step in his journey towards championship gold, many of the dreams he discussed on camera years early having already come true.

“Before I felt like I was trying to make a name and trying to establish myself. Now that this is my 10th fight, I feel like the UFC is my home. I feel like I’m one of the guys that’s going to stay on the roster and be around for a long time.

“It’s crazy,” he adds of the journey that has brought him from the regional battles captured on celluloid to competing in major events under the UFC banner. “People at the gym who fight in the UFC don’t even realize that I have 10 fights in the UFC.