"The Diamond" Eager To See What He And His Opponent Are Made Of Heading Into His Historic Trilogy With Conor McGregor
By Thomas Gerbasi, on Twitter: @TGerbasi • Jul. 9, 2021

Dustin Poirier’s words to Conor McGregor as they faced off at the press conference before their second fight in January weren’t meant to intimidate, but to instruct, to let the Irishman know what he was in for a couple days later when they met in the main event of UFC 257 in Abu Dhabi.

It hits a lot harder than telling someone you’re going to kick their ass on Saturday night, even if such statements don’t get as much play on social media. Then again, Poirier has never been one for pre-fight theatrics. He’s always saved his energy for fight night, when he consistently delivers performances that could seamlessly fit onto Hollywood’s silver screen for all the drama involved for 15 or 25 minutes or less.

The second McGregor fight wasn’t exactly Rocky, as Poirier wasn’t required to make a miraculous comeback to win, but evening score with his rival was a storybook ending for the 32-year-old, who had been chasing payback with “The Notorious” one ever since he was stopped in a single round by McGregor in 2014. A little over six years later, he got it, halting McGregor in the second stanza.

On Saturday in Las Vegas, they meet for a third time. And Poirier is bringing the same energy he did for the last fight.

“I'm excited to see and show what he's made of and what I'm made of,” he said. “I hope to God that this fight is from the first bell, uncomfortable and grueling and painful and bloody and everything that fighting is supposed to be, because then we can find out who really wants to be in there and I know it's me.”

For Poirier, everything that fighting is supposed to be has little to do with glory or paychecks, though glory does make the paychecks bigger and that’s never a bad thing or something the Louisiana family man would turn down. But as far as everything that goes into making a megafight like the one he is one-half of this weekend, let’s just say that’s not his favorite part of the process.

“Over the years you mature and you fight for different things,” Poirier said. “When I was a young kid, ignorance is bliss and I was fighting for the fight and now I'm still fighting for the fight, and that's the only thing I still love about this sport. The only thing I love about mixed martial arts anymore is the actual fight and the camaraderie at the gym between my friends and training partners and the push we get challenging ourselves and hunting for new information, whether it be skillwise or the way people go about things. The hunger for information and the hunger to challenge myself in actual combat is the only thing I love about this.”

To “The Diamond,” everything that doesn’t involve training or the fight is “like a façade. It's a fashion show, it's like Keeping Up with the Kardashians. This used to be no holds barred, the best of the best. Now it's who can talk and it's everything I hate about social media and about everything. Luckily, for me, at the end of the day, I get to fight. And if there wasn't that, then I think I'd have to find something else to do. Because that's the only real part left in this sport.”

And on fight night, Poirier has never seen the actual battle as a clash of techniques or a point-scoring contest. He goes deeper than that. He wants to see what’s inside an opponent’s chest and see if he can break their will before they break his.

“You definitely get a sense of the heart, hunger, tenacity that a person has in that 15 or 25 minutes,” Poirier said. “You get a piece of that. You get a feel for who he is that night, where he's at mentally and how much he's willing to leave out there. Because you don't ride for free. We all know that. Well, the smart ones do. (Laughs) Maybe we all don't. But you don't ride for free. How much of yourself are you willing to leave in there to get the goal? And you can feel that in certain guys. You can lock horns with guys and you know that this guy's willing to leave it all out there. This guy's willing to not go home. You feel that energy, for sure.”

There’s an excitement and intensity in Poirier’s voice when he talks about fighting. Not about everything around fighting, or his past, present and future plans in the sport, but the time in the Octagon. And though he’s on top of the game now, perhaps a win away from challenging Charles Oliveira for the UFC lightweight crown, and still only 32, there will come a time when throwing hands with somebody on a Saturday night a couple times a year won’t be an option. What replaces that feeling then?

“I'm sure there are gonna be things that are similar in competing, whether it be in the business world, gunning to get the job before somebody else, or whatever it may be, I don't know,” he said. “But to actually stand in front of another man, leaking blood and looking at each other in the eyes with no breath in your lungs and finding a way to push forward, I don't think that could ever be replaced. You have to fight. You have to have everything on the line, the world watching, basically naked out there and make it back to your family. That's something special about every night that you go out there and do it that I'll never forget and I don't think that can ever be replaced. And it's not just something I talk about and brush aside. I actually honor that. We elevate each other's lives on those nights. We push each other to be superhuman, if you will. We push each other to a depth you can only get by finding out what he's really made of, pushing him to the ends, to how bad do you really want this? How much can you push through the pain and the agony and being uncomfortable?”

Poirier pauses, maybe aware of how only a select few on this planet, both past and present, have not only felt this way, but embraced those feelings.

That’s where the glory is for Poirier. In the fight. Some may assume it’s that way for every one of his peers. It’s not.

“I'm sure there are guys out there,” he said. “But fewer and fewer as the years go on, as the world changes. I feel like I'm one of the last real guys fighting for the fight, for the love of the fight.” 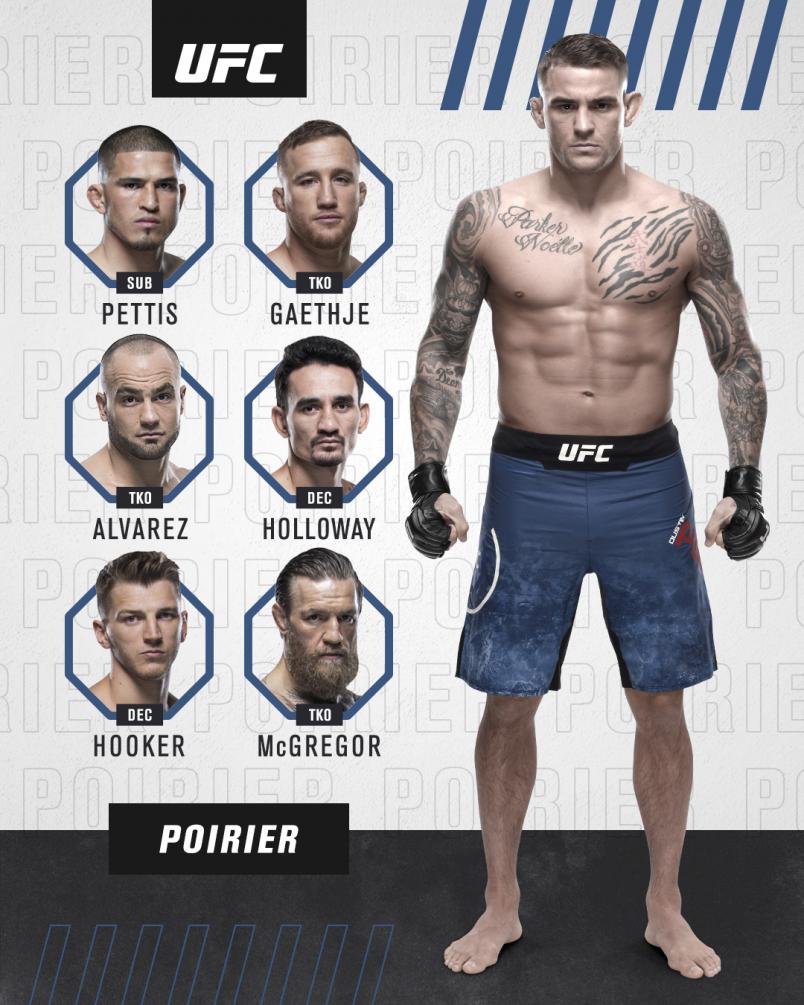 On Saturday, he gets to do it again. And he’s got another message for Conor McGregor.

“Show me,” said Poirier. “Come prepared, come ready to go; I'm crossing all my Ts, dotting all my Is, no stones left unturned over here. I'm putting myself in the best position I can to win and let's find out. No harsh feelings, no big head, let's go in there, man to man, take our shirts off, put the gloves on and fight in front of the world and see who's standing after. That's the purity of it and that's what I love about this, still. And that's the only thing that's real. And after the fight, we can get on Instagram and say whatever we want to say. But you know, for 25 minutes, we're gonna get some real-life time in this fake world.”